Students Set a Place for Women in History 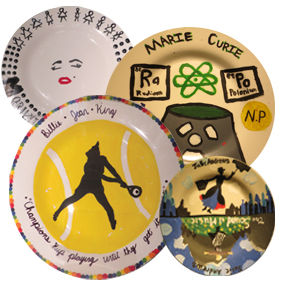 Plates featuring famous or influential women are part of an art installation in the Lilley Library.

“For most of history, Anonymous was a woman.”

This quote by author Virginia Woolf sums up the invisibility of women in the collective history of the world. Overshadowed by the accomplishments of men, few females have made it into the history books. And, yet, women have made their presence known in every aspect of human existence from art to banking to the military to the board room and beyond.

In 1979, feminist artist Judy Chicago gave thirty-nine women a seat at the table in her masterwork “The Dinner Party,” a giant sculpture that imagines famous women from myth and history engaged in conversation.

The installation art, which took more than five years to produce, is composed of thirty-nine ornate place settings on a triangular table with thirteen plates on each side. An additional 999 women’s names are written in gold on the floor. The piece toured the world, gaining an audience of millions; it is now on permanent display at the Brooklyn Museum.

This year, Penn State Behrend hosted its own dinner party in the John M. Lilley Library.

Students in last spring’s WMNST 106 Representations of Women in Literature, Art, and Culture taught by Dr. Sarah Whitney, assistant teaching professor of English and women’s studies, painted plates to honor women from a wide variety of backgrounds. The students’ work was then on display in the library’s gallery space for several months.

Students were tasked with researching a woman of their choice who had made significant contributions to the world. Then they designed and painted a plate, using color and shape creatively to demonstrate the chosen figure’s importance. Students also wrote a reflection paper exploring their figure’s historical, and personal, impact on the artist.

“Using hands-on materials to make historical events come alive is a key part of my teaching practice in general,” Whitney said. “I think using manipulatives is particularly important in studying ‘The Dinner Party’ because it is a visceral, intense piece, and because Chicago was intentional about using traditional women’s art practices, like china painting and embroidery, to honor forgotten female artists. By doing it, you sort of experience Chicago’s process.”

“The purpose of ‘The Dinner Party’ was to recognize women who history had forgotten and I wanted someone who was unconventional, even by today’s standards,” Boniger said. “Pavlichenko has an incredible story. She is a young woman from a Ukrainian village who became the Soviet Union’s greatest sniper during World War II. She showed that woman can be hard and strong, and they don’t have to be the delicate, soft things that society would prefer we be.”

Whitney was pleased with the range of women and topics that students picked.

“The plates reflect a diversity of choices, which is wonderful,” Whitney said. “I especially enjoyed learning about new women from our international students whose choices spanned the globe. Furthermore, some students chose mythical or fictional figures, such as Shakti, which were also quite enlightening.”

Even Judy Chicago was impressed with Behrend’s dinner party. A post on the Behrend Blog about the exhibit reached the artist who wrote to say, “I’m impressed that the students used china paint, and I’m glad that they learned so much.”