Athletics in the Time of COVID-19

Every sport, except wresting, was able to have some sort of competition this past spring.

When COVID-19 forced the students, faculty, and staff of the college to go home and stay there, the shift to remote learning wasn’t easy, but it was far more achievable than any pivot to remote sports. You can’t have a swim meet or basketball game or wresting match from your own home.

“From the time we all had to go home, we just wanted to come back,” said Brian Streeter, senior director of Athletics. “We had work to do and our coaches were anxious to recruit and get back to playing games again.”

When they learned there would be no fall sports season, everyone in the Athletics program did what any good athlete does when faced with disap­pointment—they set their sights on the future and worked harder.

“Knowing our coaches and athletes wanted to compete, we worked hard to make sure everyone could play their sport in the spring of 2021,” Streeter said. “Athletes and coaches were thrilled, but it was hard on staff to go from one sport to another for four straight months.”

Every sport, except wresting, was able to have some sort of competition this past spring. It was less than ideal, but most were happy to have the opportuni­ty to compete, according to Streeter.

“We give credit to our coaches and athletes for having a successful spring season with four AMCC champion­ships—men’s golf, women’s tennis, softball, and baseball—and four NCAA tournament appearances,” he said. “But it was our Athletics department staff who really took one for the team(s), working around the clock to take care of our athletes’ needs. In the end, we helped more than 360 student-athletes compete. I’m proud of that.

“Maintenance and Operations staff took care of all the things we needed to maintain a safe environment and Hous­ing and Food Services supported our student-athletes as well, as did members of the college administration,” Streeter said. “It was a terrific team effort.”

While COVID-19 challenged everyone, it may have made them stronger.

“I really believe our teams will be closer due to the circumstances they faced over the last year,” he said. “We met the challenge and overcame it.”

That’s what competitors do. 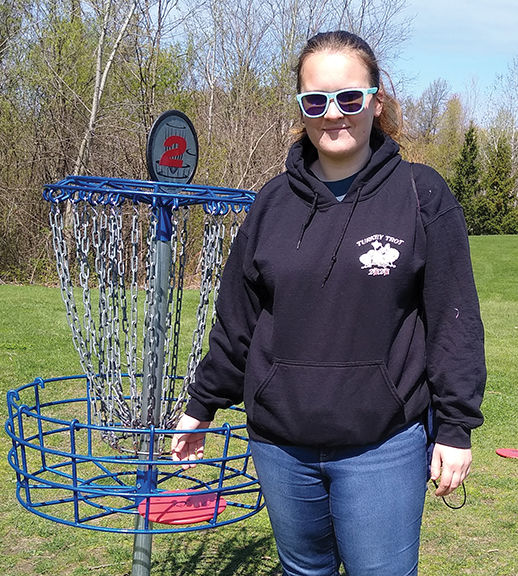 Within five years of Behrend’s first 9-hole disc golf course opening, one thing had become certain: It was a popular addition to campus. Now, players will have even more targets to hit as the course was recently expanded to 18 holes. Check out the new course map at behrend.psu.edu/discgolfmap.

The new holes opened in April and expanded play from the west side of Jordan Road to the east side of the road. Brian Streeter, senior director of Athletics, said the course is a work in progress. Once the course is finalized, Streeter said they will install permanent signage, including a full course map and signs at each tee. For now, the new hole tees are marked with orange flags. Maps are available at Hole No. 1, near the tennis courts.

The original 9-hole course was a student-driven project, initiated by Kyle Stephan ’14, a former Student Government Association president, who got the ball rolling, or rather, the discs flying. Stephan was joined by then-students Trey Neveux, Mark Malecky, and Tyler Ferraino, now 2016 graduates, who together designed the course, located equipment, and secured funds.

“I’ve talked to all the members on the original board of the club, and we’re all extremely happy the course was expanded to 18 holes,” said Neveux, who is now a launch engineer at SpaceX in Los Angeles. “I’m looking forward to playing the expanded course and have talked to friends and former professors about playing a round the next time I’m in Erie.”

Visitors may play for free anytime the course is available. Users are encouraged to park in the overflow lot on the south side of Jordan Road on Old Station Road. A visitor parking pass can be obtained from University Police and Public Safety. 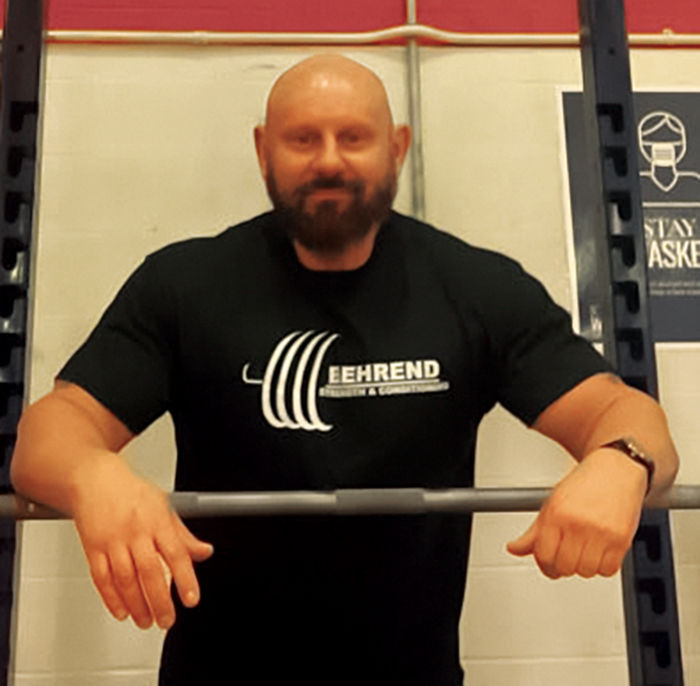 Earth, Wind & Fire is just one of the many tools Chris Viscuso, the college’s new coordinator of strength training, uses to motivate his student-athletes.

“I try to make it fun and keep things lively and upbeat,” he said. “I make them listen to my music, which drives them nuts. They tease me about it, and I’ll say, ‘Hey, this group is in the Rock & Roll Hall of Fame. If you can tell me who it is, you can cut your workout short.’”

Rare is the college student who gets to skip out of strength training early.

Like any good coach or fitness guru, Viscuso takes an approach that walks a line between pleasure and pain. He looks the part of a bodybuilder—bald, beard­ed, muscled, and tattooed. He’s often grinning, but with just enough seriousness in his expression to convey that if you slack off, he’s going to call you on it.

Viscuso joined Behrend’s Athletics staff in September of 2020. It was a homecoming for the 1992 History graduate who had played basketball for the Behrend Lions. He has bragging rights as the first player to score a basket in the newly renovated Erie Hall when it reopened in 1992.

Nearly twenty years later, Viscuso is back at Behrend. “I’m the only ‘coach’ on staff who works with all 300 of our student-athletes,” he said. “And, I get to work with them year-round, not just when they are in season.”

One could argue that good athletes are generally built in the off-season.

“If you get stronger, you’re going to be a faster runner, a more explosive basketball player, a better soccer player,” he said. “There is not a sport you can play that you can’t play better with a stronger body.”

Before Behrend: Assistant basketball coach at Brescia University in Owensboro, Kentucky, then at Gannon University in Erie for fourteen years.

On one measure of athletes: “I ask them to do forty unbroken pushups and ten pullups on their own; it’s not a huge challenge, but it tells me where they are, physically. Then we have a starting point.”

On Behrend student-athletes: “As a whole, our athletes have impressive GPAs, unheard of in sports-scholarship-level schools. Personally, I have found them to be hungry for information; they love feedback. In general, they are just good kids—smart, hardworking, respectful.” 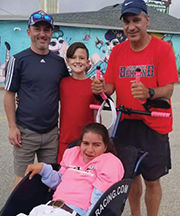 Every year, Behrend head soccer coach Dan Perritano and his daughter Emma, who has cerebral palsy, embark on a days-long endurance walk.

Every year, Behrend head soccer coach Dan Perritano and his daughter Emma, who has cerebral palsy, embark on a days-long endurance walk. This year, they took Emma’s Hoyt wheelchair on a trek across the entire state of Colorado. The pair began their walk in Mountain Home, Wyoming, near the Colorado border and ended in Antonito, near the southern border of Colorado, a 320-mile journey that involved more than twenty days of walking. Along the way, they were joined by numerous Colorado residents, including Behrend alumni, such as soccer alumnus Ryan Ruta and his son, Reece, above at left and center. Each year, the Perrita­nos use their walk to raise money for a charitable organization. This year’s cause was Ainsley’s Angels of America, a nonprofit organization dedicated to helping people with disabilities experience endurance events as well as building awareness about the community through inclusion in all aspects of life. At press time, the father-and-daughter duo had raised more than $10,000 for the organization.­

Seven former student-athletes—all members of the Class of 2010—have been named to the Penn State Behrend Athletics Hall of Fame. They will be inducted in a ceremony this summer that also will honor the college’s 2010 Allegheny Mountain Collegiate Conference championship teams.

The induction ceremony also will honor longtime Behrend employee Robert Wittman, the former intramural and recreational programs coordinator and facilities coordinator at Junker Center. Wittman organized all aspects of the college’s intra­mural, fitness and club sport programs and managed the day-to-day operations of Junker Center. He also served as an assistant coach for the women’s basketball team for nine years.

“Rob touched the lives of many individuals over his twenty-eight years of service to the college,” said Brian Streeter, senior director of athletics. “His service and knowl­edge will surely be missed.”