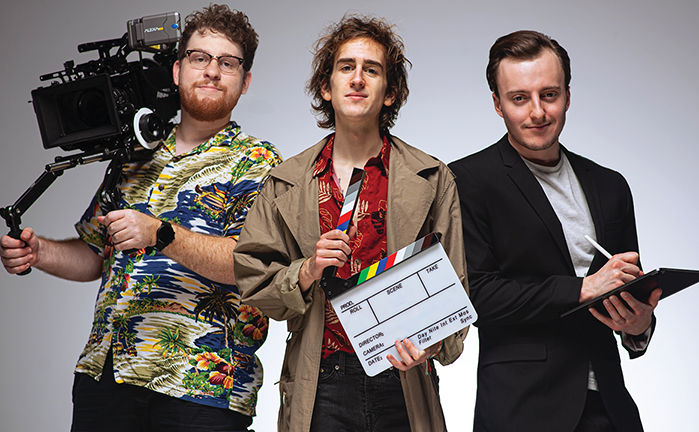 What do three high school friends, a classic David Bowie song, and bare-knuckles boxing have to do with one another? Spoiler: It’s not a 1970s-era barroom brawl. It’s a video-production company, Oddity Productions, that former classmates Danny Pakulski, Simon Yahn, and Liam O’Brien formed about a year ago when they were college students, Pakulski and O’Brien at Penn State Behrend and Yahn at Rochester Institute of Technology.

Named after Bowie’s epic song, “Space Oddity,” the company will hit the indie film circuit this year with Alexander the Brain, a short film about—you guessed it—bare-knuckles boxing. Set in the post-Civil War United States, the psycho­logical thriller “dives into the dangerous, testosterone-fueled world of underground boxing to tell the story of Alexander Conroy, a victim and now cog in a cycle of violence in the United States.”

“The period after the Civil War was a really divisive time,” said Pakulski, who graduated from Behrend in May with a degree in Digital Media, Arts and Technology (DIGIT). “I saw a connection between that era and where we are in this country today, and I wanted to look at that.”

The film, which explores themes of toxic masculinity, class systems, and patriotism, was shot last year in Erie. The lead actor, Jacob Ames, fit the role so perfectly that it’s hard to believe they found him at Starbucks, where the aspiring actor was working part time with O’Brien.

Much of the filming was done in Ames’ attic, a creaky, dusty, wood-framed space reminscent of an earlier time in the country. COVID-19 complicated production, but Pakulski said the pandemic also gave them time to work through all aspects of the project, including fundraising using a crowd-sourcing website.

The trio made the entire 20-minute film for less than $6,000, thanks in part to equipment borrowed from Behrend’s Open Laboratory for Digital Creations (BOLD-C), which encourages collaboration between students and community filmmakers, nonprofit institutions, and commercial clients. An outreach program of the School of Humanities and Social Sciences, BOLD-C rents out state-of-the-art filmmaking equipment that was funded by a gift to the college.

The business of filmmaking

Pakulski is the writer and director for most of Oddity’s work, which includes not just films, but paid commercial work.

Directing presents its own challenges. “Shooting is the performative part,” he said. “Everyone has to be on top of their game and perform their part, whether that’s directing, acting, lighting, makeup, or sound.”

Then, comes the editing. Pakulski said that is when they can relax, take their time, and put it all together.

Pakulski became absorbed in video production as a teen. At Fairview High School in Erie County, he and Yahn were the go-to guys for all things audiovisual. That’s how O’Brien, who has known Pakulski and Yahn since primary school, began working with them.

“I asked Danny to help me film an advertisement for a school project when I was a senior in high school,” O’Brien said. “Little did I know that I’d be coming up with advertising ideas and filming them with Danny three years later.”

‘Being odd is being memorable’

“Our company name is meant to represent how our creativity will propel our clients’ marketing into new frontiers, uncharted creative territories,” said O’Brien, a junior dual-majoring in International Business and Finance, who handles the company’s business development and project management. “Being odd is being memorable.”

A club for would-be filmmakers

At Oddity, Yahn handles the technical aspects of shooting. His skills, honed at RIT, where he is a motion picture science major, will benefit Behrend students, too, through workshops he will help lead in a new club that O’Brien and Pakulski are helping to develop.

“We want to teach students about the film industry, how to use the BOLD-C gear, and facilitate cross-disciplinary collaboration between Marketing and DIGIT majors to create speculative advertisements for companies, with the goal of eventually taking on commercial work, contributing to Behrend’s Open Lab style of learning,” O’Brien said.

“The Behrend club aligns with our company’s mission to raise awareness and build the film industry in Erie,” O’Brien said. “We want to make film production more accessible.”

Pakulski is in no hurry to take the company to California or New York City. “Erie is very versatile,” he said. “You can find nearly any setting you want here—forest, downtown, beach, farm—and it’s a nice place to live and work.”

Check out some of the company’s work at oddityproductions.com.