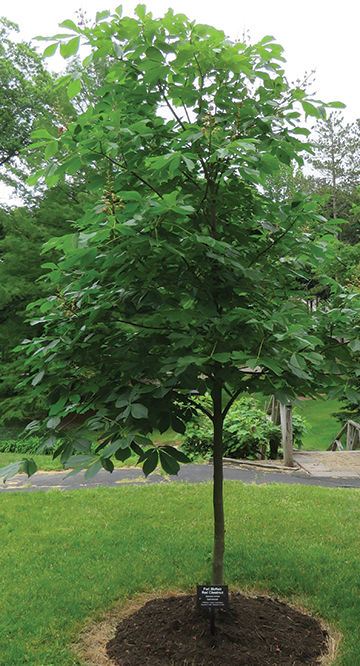 The beautiful wooded property on which Penn State Behrend sits was gifted to the University in 1948 by Mary Behrend in tribute to her late husband, Ernst, who owned Erie’s Hammermill Paper Company.

Before his death, Ernst and Mary traveled the world, often bringing back trees as living mementos of their trips. While that likely would not happen today, as importing non-native species can have disastrous consequences (see the American Chestnut story on page 18), it was not uncommon then—and it’s because of the Behrends’ journeys that the campus is now home to more than 200 species of notable trees and is recognized as an arboretum by the American Public Gardens Association.

Among the specimens are those made in memory or honor of family, friends, or associates by alumni, faculty, staff, and friends of the college.

“My mom loved trees, so I thought it would be a good way to remember her,” said Lauren Piera-Jowell ’04, who donated a Wildfire Black Gum tree in honor of her mother, Andrea Piera. It’s planted near a main walkway on campus between Niagara Hall and Kochel Center.

Behrend’s natural environment is stunning—the gardens and flower beds, the variety of habitats from wetlands to forests to grasslands to the gorge—but it’s the trees that knit it all together. In the spring, the flowering varieties steal the show, and in autumn, the brilliant fall colors are a sight to behold.

It’s fitting that those who want to com­memorate a loved one or, sometimes, a life event of their own would choose to plant a tree on campus, where it can be a living monument for decades.

If you’d like to purchase a tree in memory or recognition of someone who has made your world a more beautiful place, email the Office of Development and Alumni Relations at [email protected] or call 814-898-6345.

Leave your mark at Behrend

Celebrate your connection to Penn State Behrend with an inscribed paver at the Mary Behrend Monument Walk.

The Mary Behrend Monument Walk honors Mary Behrend’s gift of her family’s Glenhill Farm estate to Penn State. The monument is a nine-foot granite obelisk surrounded by benches, trees, gardens, and a paver walkway. Installed on campus in fall 2015, it’s located next to what was once Mary’s painting studio, now the college’s Studio Theatre.

Pavers can be inscribed with up to three lines for $150.

You can find full details and order your paver at behrend.psu.edu/monument.