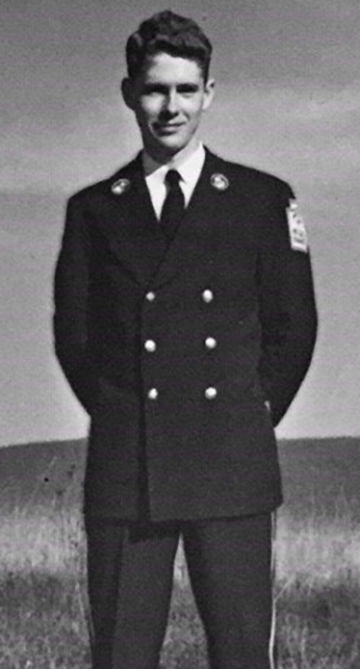 One of Behrend’s first students

Today’s college students might not think they would have anything in common with a 90-year-old man, a member of the first class to study at Penn State Behrend in 1948, but here’s something many young people in their first years at college might relate to: By his own recollection, he “had a little too much fun at first.”

First, some history: When Robert Betts ’57 attended college, The Behrend Center, as it was known then, did not offer four-year degrees. Every student who attended Behrend went to University Park for their second two years to complete their bachelor’s degree. It was there that Betts, an engineering major, found himself fully involved in college life but, as he acknowledged, not so immersed in his schoolwork.

“A new world opened up to me, different lifestyles, people, scenery, intensity,” he said. “I joined the Blue Band, the orches­tra, the chapel choir, and a fraternity—Phi Kappa Sigma—and I was an honorary Phi Mu Alpha. It was a lot of fun.”

With all the distractions, Betts’ grades slipped and he was “discredited,” the term then used for his failing to meet the standards for engineering students.

“All the music rehearsals and fraternity social life activities diluted my attention to the rigors of study,” Betts said.

He dropped out, which turned out to be a helpful decision as his father, the family breadwinner, contracted polio that same summer. Betts went to work at GE Refrigeration to help support the family and entered an apprentice training program for locomotive and powerline component metal casting.

After nearly four years, he completed the program with top honors. By then, his father had recovered enough to return to work, so Betts decided to go back to school. He used the high marks earned in his apprenticeship to appeal to Penn State and was reinstated as a Metallurgy major in the School of Mineral Industries. He graduated in 1957, almost ten years after he had started his college career at Behrend.

He then embarked on a long career, beginning in 1957 with GE’s Jet Engine Division in Cincinnati, Ohio. There he met his wife, Alene. Married for more than sixty years, they have four children, four grandchildren, and

Betts describes his life as the “embodiment of the American Dream,” from his early years living in the newly built Franklin Terrace housing development of Erie and his childhood spent splashing in Wintergreen Gorge’s Fourmile Creek to his enrollment at Behrend and his golden years running a tech consulting company and traveling the world with his wife.

Behrend Magazine recently chatted with Betts, by email, from his home in Bentonville, Arkansas, to learn more about one of the college’s native sons. He is a member of the Silent Generation by virtue of his age only: He was more than happy to talk. (By the way, he’d love to talk to you, too. See the note at the bottom.)

Born in desperate times: I was born in February 1931 and lived through the Great Depression with an extended maternal family group in a modest home in downtown Erie. There were twelve of us, including seven adults, in the house.

An early start: I started kindergarten a year early because my Aunt Kate, who was a teacher, thought I was ready. I think it was due to our family’s focus on books and games. We played a lot of anagrams, dominos, and Monopoly, and as gifts I usually received things like blocks, model airplanes, and chemistry sets.

A new home and school, times two: In 1940, my parents moved our family, which now included my baby sister, to the brand-new Franklin Terrace housing development to be close to my dad’s work at GE in Lawrence Park. I used to walk to East High School, about a mile and a quarter each way, every day, until 1945 when my father built a house in Harborcreek. I grew up playing in Wintergreen Gorge and graduated from Harbor Creek High School in 1948.

Family matters: My family decided that I would be the first to go to college, and it just so happened that Behrend Center was opening that year, so the proximity and timing was right. Aptitude tests revealed I had a predisposition for engineering, so that’s what I was enrolled in.

Glenhill “resort”: Glenhill Farm was beautiful. It was imposing with all the estate attributes, including an in-ground pool, golf practice range, and gorgeous Wintergreen Gorge. It felt more like a resort than a campus!

The first class was diverse: In 1948, many of the men at Behrend were World War II veterans and the women were much more socially mature than I was. The women pretty much owned the place as they lived on campus in the farmhouse. None of the guys complained!

Behrend fun: Men lived off campus, so we didn’t have much opportunity to hang out on campus, except for a couple of formal dances every year. I remember swimming in the Glenhill pool and skiing when they put a tow rope up on the big hill behind the farmhouse.

Culture shock: Campus life in State College was a bigger explosion of activity and quality than this kid from the country had ever experienced. As I said early, I got a little too involved in a lot of extracurricular activities.

Life after college: I spent most of my career at GE Jet En­gine’s Materials Development Laboratory. I have several patent awards for my work with protective coatings, some of which are still flying around fifty years later. I received several engineering awards from GE before I left in 1988 to work for Cincinnati Thermal Spray Inc., where I stayed until my retirement in 2015.

Post-retirement gig: After my retirement, I formed a tech consulting company: The Very Idea. I named it after a phrase my mother often said to me as a young man, rebuking what she thought was questionable behavior. Today, I live in Arkansas with my wife where we enjoy living near our daughter and youngest granddaughter when we’re not traveling. I continue to be a peer reviewer for the American Society of Metals’ Journal of Engineering Materials and Processes.