Penn State Behrend Students Succeed In and Out of the Classroom

Here are just a few recent examples of their accomplishments 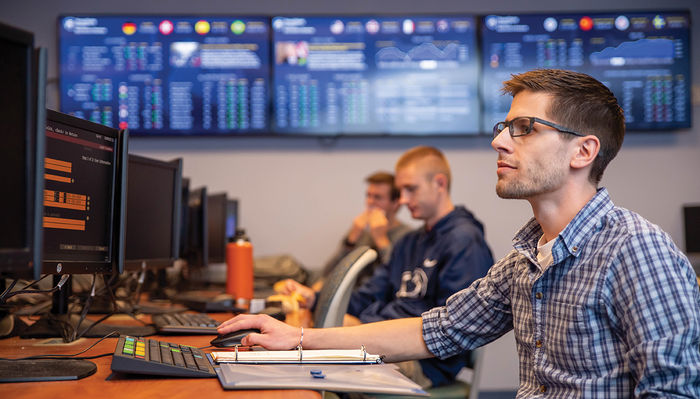 The Intrieri Family Student-Managed Fund has grown to more than $1 million!

The Intrieri Family Student-Managed Fund, which began in 2012 with a $100,000 gift from alumnus Vincent Intrieri ’84 and his wife, Joanne, has grown to more than $1 million! Reaching this milestone means funds above the million-dollar mark will support student scholarships.

While the scholarships are a nice bonus, the value of the student-managed fund is evident for upper-level Finance students who have the opportunity to actively manage the fund. Many business alumni have reported that their experience with the fund has directly contributed to their early career success.

Josh Slayton, who graduated from Penn State Behrend in May with a degree in Mathematics and a minor in Civic and Community Engagement, was chosen by Penn State’s Student Service and Leader­ship Awards Selection Committee to receive the Smile for Sam award. The award recognizes outstanding undergraduate students who have demonstrated academic excellence and leadership through community service and/or stu­dent organizations.

Slayton was a Schreyer Scholar and was active at Behrend in Alternative Spring Break, the Gender and Sexuality Equality Club, STEM Leaders, Science Ambassadors, and the Lambda Sigma and Phi Kappa Phi honor societies. He plans to pursue a graduate degree in statistics at Bowling Green University, with the goal of teaching at the college level.

The Penn State Behrend chapter of the Institute of Industrial and Systems Engineers (IISE), in collaboration with the University of Pittsburgh IISE Chapter, hosted the virtual 2021 IISE Regional Conference this spring. More than 120 students from Penn State, the University at Buffalo, Rochester Institute of Technol­ogy, Clemson, and others attended.

Two Behrend Industrial Engineering students, Megan McRandal and Alexis Rimpa, who both graduated in May, won second place in the undergrad­uate research paper competition for “Investigating the Effectiveness of Visual Instructions for Teaching Manufacturing Paradigms.” 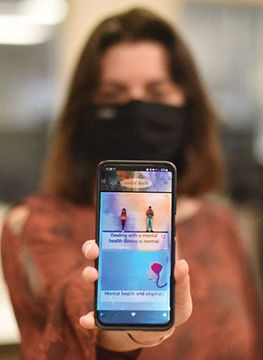 The Serene app, available as a free download at the Google Play store, features videos that introduce users to meditation, guided breathing, and progressive muscle relaxation, among other topics.

A team of Penn State Behrend students has developed a mental health and mindfulness app that helps users track their emotions and suggests activities and resources that can help with stress and depression.

The Serene app, available as a free download at the Google Play store, features videos that introduce users to meditation, guided breathing, and progressive muscle relaxation, among other topics. It also provides links to Erie County mental-health support services, including crisis centers, and national emergency hotlines.

“When people are in distress, it can be difficult for them to think clearly,” said Antigoni Kotsiou, who developed much of the app’s content, “so we made it as simple as possible: Try a new recipe. Take a walk in a different neighborhood. Call your grandparents.”

Kotsiou, who graduated from Behrend’s Master of Applied Clinical Psychology program this past December, created the content in collaboration with Dr. Chris Shelton, assistant professor of clinical psy­chology and director of the college’s Virtual/Augmented Reality Lab. Marc Maromonte, a Computer Science major who graduated in May, handled the coding, and Erica Juriasingani, who also graduated in May with a degree in Psychology, led the user-experience research and design.

Behrend students who belong to the Materials and Manufacturing Group (MMG) club get two of the most valuable things any student can acquire outside of a college classroom—professional contacts and opportunities for hands-on experience.

Since the MMG’s inception five years ago, members have received more than a quarter of a million dollars in scholarships! Most of the awards have been to Indus­trial, Mechanical, and Mechanical Engineering Technology majors, but the club is open to students in any discipline, Lynch said.

It’s little wonder the MMG is now one of the largest clubs on campus, with nearly 100 members from engineering, business, and science programs.