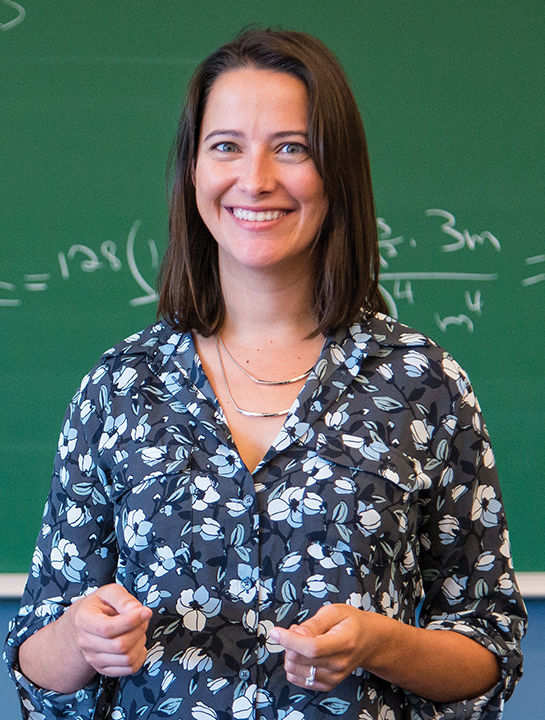 The first manned flight to Mars will require an extensive layover: To shorten the trip, NASA would launch its spacecraft as Earth and Mars are nearing their closest orbits. As soon as the crew landed, however, the distance between the planets would be growing—at a rate of 67,000 miles per hour. It would take a yearlong wait for the orbits to align again.

The mission simulations at NASA’s George C. Marshall Space Flight Center mostly focus on the Mars crew, which require considerable resources to survive a stay of that duration. But the transport ship—especially if it’s idled for a year—also requires some care.

“On the International Space Station, there are always astronauts on board, and much of their daily work involves maintaining the station,” said Dr. Charlotte Marr de Vries, assistant professor of mechanical engineering.

“With a Mars trip, you wouldn’t have that,” said de Vries, who spent ten weeks in a NASA faculty fellowship, working with Marshall Space Flight engineers and other experts on Mars-flight design projects. “The crew would have to shut almost everything off as they exited. In an environment like that, dormancy can be a danger.”

One concern is that a microbial biofilm—a grouping of microorganisms that forms on surfaces—could degrade or even clog the air and water processors on the transport. The reduced-gravity conditions of space flight increase both the growth and virulence of biofilms, NASA has found.

De Vries and her team proposed a novel approach: What if NASA introduced a predatory bacteria that would break apart any biofilm as it formed?

If that sounds like the setup for a sci-fi disaster movie, relax. NASA isn’t going to try it. The agency is open to unorthodox solutions, however—at least on paper.

“They are in their hearts innovators,” de Vries said, “and they’re pretty far out at the edge of what’s being invented. It is extremely difficult to come up with something that NASA hasn’t already thought of.”

The agency’s decisions nonetheless tend to be weighed against the legacy of the space shuttles Challenger, which exploded in 1986, killing seven crew members, and Columbia, which broke apart on reentry in 2003, killing seven more. That history limits the engineering-design process, de Vries said.

“Failure is important to a design engineer,” she said. “If you don’t try ideas that fail, you aren’t really pushing yourself. If you keep your guard up and you think, ‘I can’t suggest this, because it might be a terrible idea,’ then you never test the idea that might be truly revolutionary.

“After Challenger, however, and especially after Columbia, failure is not an option at NASA,” she said. “They are, after all, putting humans in space, and the safety of those astronauts is, at all times, the number-one priority. It has to be.”