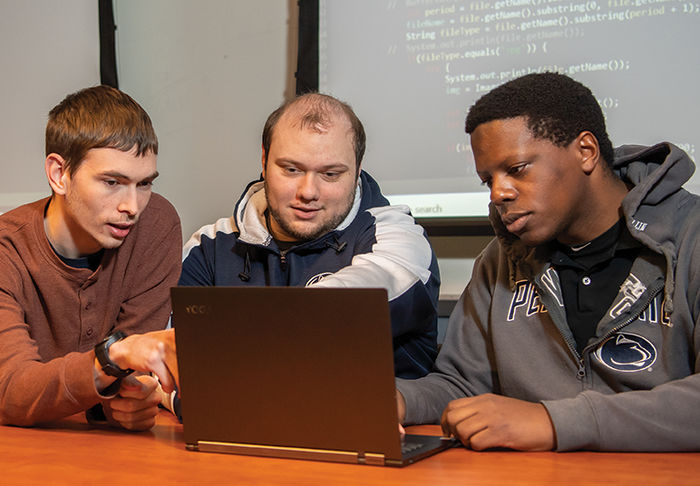 Student team takes capstone project to the next level

Imagine if your home were damaged in a natural disaster, fire, or other tragedy. You would want a settlement from your insurance company as soon as possible so that you could start repairs. But unsafe conditions or barriers such as downed power lines could delay claims adjusters by days or weeks.

Enter drones, those buzzing, radio-controlled flying cameras that can give a birds-eye (and closer) view of an area while the operator stays safely out of the danger zone. It’s a technology well-suited to the needs of the insurance industry.

So when Erie Insurance, a multi-line insurance company headquartered in downtown Erie, wanted to explore using drones to create 3-dimensional models of damaged property, they sponsored a capstone project at Penn State Behrend, challenging a team of engineering seniors to see if—and how—it might work.

Computer Science seniors Kyle Burns and Jacob Scott and Software Engineering senior Benjamin Williams quickly discovered that the initial objective of the project—to develop a software suite that could capture images and store them to build 3-D models—was already available.

“We found this plug-and-play software that could easily be adapted,” Scott said, “so, we thought: ‘Well, let’s take this project to the next logical step and see if we can incorporate machine learning.’”

Machine learning is a hot topic in the engineering disciplines, defined as “a method of data analysis that automates analytical model building.” In short, it’s an application of artificial intelligence based on the idea that machines can learn from data, identify patterns, and make decisions without being explicitly programmed to do so.

In the case of a drone being used to survey property damage, it means programming the software to not only record and store images, but compare images in order to automatically identify and highlight damaged areas.

“So, as an example, an adjuster would be able to look at the map and immediately see which tiles or walls are damaged instead of sifting through all the images,” Burns said. “It would greatly speed up the process.”

The biggest challenge so far has been finding images and data to teach the machine.

“You have to train the machine with a very large set of data, and it’s just not easy to find images of damaged homes,” Burns said. “It’s easy to teach a machine to distinguish between cats and dogs because you can feed it all kinds of data about those animals, but it’s not that easy to find photos of damaged roofs.”

Williams has been focused on the software side of things, building the construction models, while Burns is handling data preparation tools, and Scott works on the machine learning aspect of the project.

The trio say it’s been a valuable learning experience.

“Engineers work on a lot of projects in classes, but it is often pretty structured and you know what the steps are and when they need to be completed,” Scott said. “But this project is much more freeform. We have had to think about what our goals are and then what steps we need to take to get there.”

They work closely with their faculty adviser, Dr. Wen-Li Wang, associate professor of computer science and software engineering, and their industry sponsor, James Shultz, software engineer at Erie Insurance, who they meet with every two weeks to share progress reports and express any needs or concerns.

“It has been great seeing their capstone progress from the idea stage to the fully realized solution that they’re creating,” said Shultz. “The team has come up with an elegant way of handling a pretty complex problem.”

The drone capstone project is beneficial training for Williams, who has already accepted a software engineering position following his graduation in May; Scott, who plans to work in software development, and Burns, who wants to work on the cutting edge of engineering in the Internet of Things (IoT). It’s a concept that is already being studied and taught at Behrend’s School of Engineering.

“I’m really interested in IoT, which involves creating networks of devices, such as home appliances or cars, that contain electronics and software that allow these things to connect, interact, and exchange data,” Burns said.