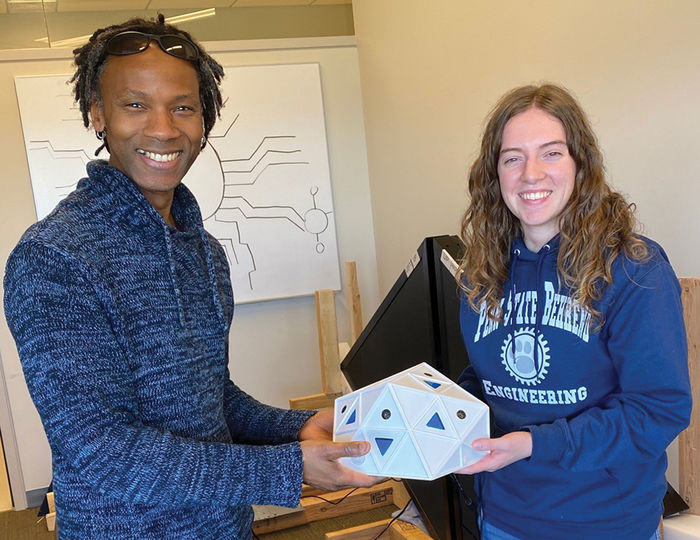 More than 280 students present­ed their capstone projects during the School of Engineering’s Richard J. Fasenmyer Engineering Design Confer­ence, held on campus this spring. The projects included a cold-weather pick­leball and a titanium-alloy container for the core samples NASA plans to collect from the Psyche asteroid.

“Student research teams work closely with business and industry sponsors to develop creative solutions to engineering design challenges,” said Dr. Tim Kurzweg, director of the School of Engineering. “The capstone process distills what students have learned in class and in the lab and applies that knowledge to integrated engineering projects.”

This year’s conference included proj­ects sponsored by Northrop Grumman, Parker LORD Corporation, Wabtec, and Westinghouse Electric, among other companies. NASA funded six teams, each of which advanced an element of the Psyche mission, which will study the core of a metal-rich asteroid orbiting between Mars and Jupiter.

The Psyche spacecraft is scheduled to launch in August and arrive at the asteroid in 2026. Scientists hope to photograph craters on the surface of Psyche to learn more about the aster­oid’s origins. Some believe it to be a failed planet.

Four Behrend students—Colton Her­vatin, Easton Hooks, Jacob Sampsell, and Thomas Zbezinski—designed a containment vessel for a follow-up mission, when NASA plans to collect core samples from Psyche and return them to Earth.

“We had to design a vessel that can endure a harsh environment,” Sampsell said. “It also has to protect the samples on their return to Earth. It will take NASA several years to collect that material. We don’t want all that effort to be wasted because of a crack in the container.”

With help from their faculty adviser, Dr. Charlotte de Vries, assistant profes­sor of mechanical engineering, the team designed a vessel that can hold twelve rods packed with core samples. To close it, they designed a lid with a tucked hinge. They didn’t have to look far for a working model: The charging case for their Apple AirPods closes the same way.

A second team of students—Tristan Grimm, Amy Nolte, and David Peterson —designed a product for use in another challenging outdoor environment: Min­nesota’s pickleball courts.

The students created a cold-weather pickleball. The project’s sponsor, GAMMA Sports, believes the new material—a blend of polypropylene and high-density polyethylene—could extend the northern season for the sport, which combines elements of tennis, badminton, and Ping-Pong.

Pickleballs tend to crack in cold weather. The ball designed by the Behrend team is more durable, due to both the material blend and the decision to spin-weld the ball’s halves.

The spin-weld eliminates the seam, where any variation makes the ball vulnerable to cracking.

“It also makes the ball bounce faster,” Grimm said. “Good players are going to notice that.”

The students didn’t know much about pickleball at the start of the project. Neither did their adviser, Dr. Gamini Mendis, assistant professor of engineering. Now, he keeps a paddle in his office.

Like most engineers, Alison Huffman enjoys a challenge. She’s also a musi­cian, so when she heard about the

Viral Machines project at Penn State’s Huck Institutes of the Life Sciences and the need for a student engineer to turn data into music, she was intrigued.

“Because I have a background in mu­sic, I am always trying to tie the arts to technology in any way that I can,” said Huffman, who graduated from Penn State Behrend in May with a degree in Computer Engineering and a minor in Music Technology. “The initial proposal for the project was to write a program that takes COVID-19 data from an Excel spreadsheet and turns it into music.”

Viral Machines was the brainchild of Huck’s Daryl Branford, director of Science-Art Initiatives, and Tally Fisher, senior research artist. The goal of the project was to express the impact of viruses in a unique way. Though the project team started with COVID, any virus data can be used in the future.

“I was fascinated with Daryl’s initial idea for the project, which quickly grew from just music into an interactive ex­perience that also includes visuals and light,” said Huffman, who received a Penn State Student Engagement Net­work (SEN) grant to work on the project.

Huffman’s first task was to write a computer program that would take virus data and convert it to Musical Instrument Digital Interface (MIDI) signals that could be imported into music software to create a song.

She then focused on designing an embedded system to control the visual display, which was to be mounted to the wall with an interface—a 3-D printed icosahedral-shaped struc­ture—in front of it that allows users to interact with the exhibit, waving their hands over it to trigger light, videos, and audio.

Huffman said the Viral Machines proj­ect drove home for her the engineering design process: brainstorm, design, test, troubleshoot, and repeat until there is a working result.

“I applied every aspect of the engineering design process on both the hardware and software sides. It required a lot of planning, testing, and debugging, and I encountered many obstacles along the way,” she said.

Even that, though, is a lesson in engineering: Patience and persever­ance are as key to the engineering process as calculus and physics.

“One of the most important pieces of advice I received at Behrend was, ‘Don’t paint yourself into a corner,’” Huffman said. “In other words, don’t base the final solution on one design. There were countless times I needed to redesign a part or use different electrical components to be compatible with the software or hardware I had chosen. I learned to be flexible and ready to redesign a solution at any step in the process.”

Before she graduated, Huffman created a working system that she helped install in the Huck Life Sciences Building at University Park.

Huffman recently moved to Mel­bourne, Florida, where she accepted a position at Northrop Grumman as a software engineer. The Viral Machines exhibit is currently on display in the Huck Building at University Park.