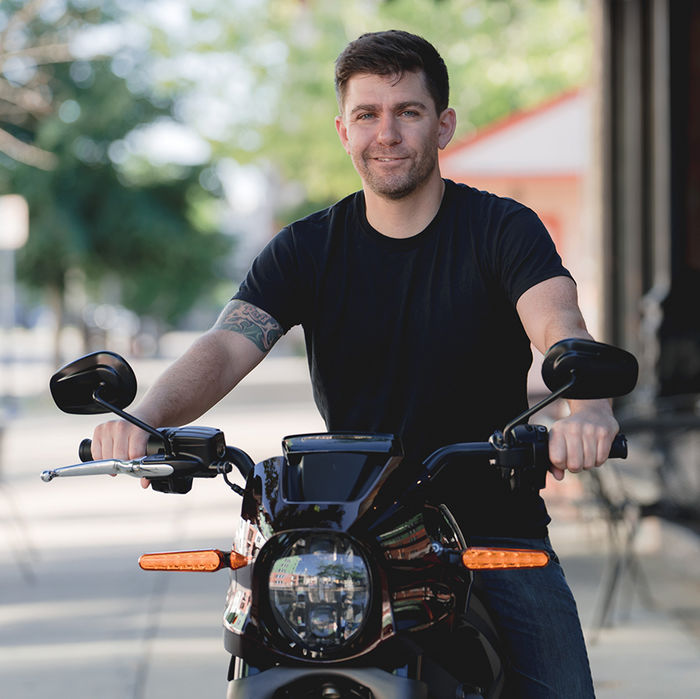 Shortly after graduating from Penn State Behrend in 2006 with a degree in Electri­cal Engineering Technology, Isaac Aunkst was working as an engineering contrac­tor for GE Transportation Systems when he found an area of work that lit him up (pun intended)—electric propulsion and motors/power-train technology.

After GE, Aunkst worked at General Dynamics Electric Boat, helping to develop the next generation of propulsion drives in submarines for the U.S. Navy. His work often took him to Milwaukee, the hometown of Harley-Davidson (H-D), maker of the iconic motorcycle. So H-D was already on Aunkst’s radar when he learned the company had released its first electric vehicle (EV) prototype–Project LiveWire—and was looking for engineers to work in the EV technology space. He was all in.

“I learned early on that I have to work on things that interest me—big things, fun things, like trains, submarines and motor­cycles,” Aunkst said.

H-D announced Project Livewire in June of 2014, and Aunkst signed on as a senior electrical design engineer four months later. At first, he was responsible for design and delivery of LiveWire’s motor and controller. After the company started production of the motorcycle in 2019, his work expanded to include the complete vehicle.

“Today, I’m responsible for the engineering and technical support for the manufacturing and service of LiveWire vehicles that are customer-owned,” he said. “I use this ‘current product’ role to gather feedback, which is then routed to designers working on future EV products.”

LiveWire, which began as a division of H-D, is now becoming its own entity. In 2021, the company announced the launch of the LiveWire all-electric motorcycle brand to be focused initially on the urban market, cementing the obvious: LiveWire is not your dad’s Harley.

Harley-Davidson has a 120-year history of success and brand strength that makes it an American icon. Known for its powerful gleaming chrome machines with rumbling V-twin engines that rat­tle windows, it’s almost unimaginable that H-D would consider an electric model.

And, yet, who better to take the lead and define cool in the EV sector than the maker of one of the most desirable motorcycle brands in the world?

LiveWire motorcycles are sleek, stylish, futuristic-sounding street bikes made to zip through cities. They don’t look or sound anything like a Harley, but they are eye- and ear-catching, nonetheless.

Aunkst said that sound was an important consideration in designing LiveWire motorcycles, as it is one of the most distinc tive features of a traditional H-D bike. It’s hard to ignore—or talk over—a Harley.

“An electric bike will not produce the sound of a traditional Harley,” Aunkst said.

But the sound LiveWire bikes do make is cool, and it’s 100 percent authentic. Visit LiveWire.com to see—and hear—for yourself. Be sure to turn up the volume.

From Paper to Product Support

One of the things Aunkst enjoys most about his work at LiveWire is being involved in the “full product lifecycle experience.”

“I have taken a motorcycle design all the way from a ‘paper study,’ where every part and function is just a concept, through writing the requirements, setting the specifications, prototyp­ing, testing, tuning, production, and, finally, providing product support for customers,” he said. “This full experience keeps me engaged and excited about the work I do every day.”

LiveWire recently debuted its second model—the S2 Del Mar. The initial batch of 100 custom-built “launch edition” machines sold out in eighteen minutes. There’s a waiting list for regular production models, which are expected to arrive in the spring of 2023. They are being manufactured in H-D’s Pennsylvania plant.

Aunkst plans to have one in his garage soon.

“Harley-Davidson and LiveWire are very supportive and encouraging of getting employees, especially engineers, on their motorcycles,” he said. “We ride the same bikes that we design and manufacture. I’ve owned three H-D bikes over the last seven years, and a new LiveWire is in my near future.”