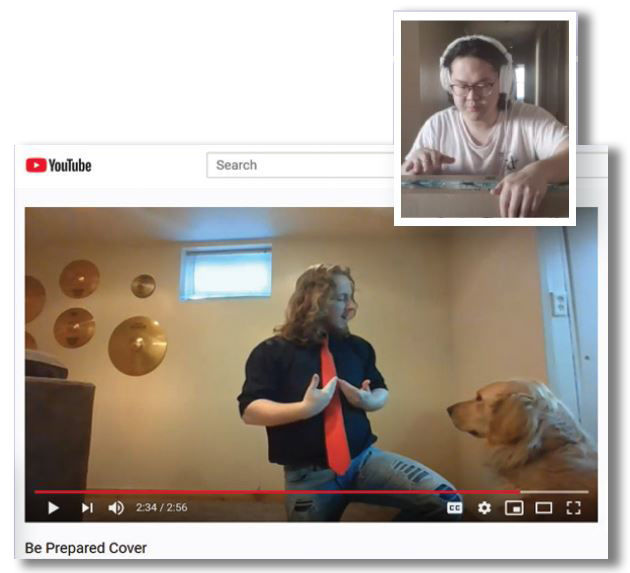 Students recorded their own videos, which Dr. Gabrielle Dietrich, uploaded to YouTube and compiled into one “show,” which the classes gathered to watch together virtually.

When the COVID-19 pandemic forced Penn State Behrend faculty and students to transition to remote instruction and learning at the end of the academic year, the musical and performing arts were particularly challenged. How do you host a spring band concert when members are spread out across the country? How do you put on a stage performance when the actorsare not even in the same city?

“My first reaction was complete panic, not so much for my lecture-based courses, but more so for my acting class and the spring musical (‘Carrie’) that I was directing,” said Emily Cassano, assistant teaching professor of theatre.

Dr. Gary Viebranz, teaching professor of music and director of instrumental ensembles, said he kicked into “what if” mode. “I started considering the options and tried to come up with something practical,” he said. “Video conferencing tools, such as Zoom, are not fast enough or reliable enough to replicate traditional rehearsals online, so I knew the plan had to focus primarily on developing individual performances.”

Fortunately, artists and musicians are skilled at thinking outside the box. Creativity is their jam. Here are just a few of the ways Behrend faculty members and students found to continue making art while apart.

In a typical spring semester, students in Music 103 Concert Choir and Music 104 Chamber Singers are busy working toward their big project, a full-length concert. When it became clear that was not going to be possible this year, Dr. Gabrielle Dietrich, associate teaching professor of music and director of choral ensembles, came up with a plan to allow each student to step into the spotlight—a virtual cabaret performance.

“I knew the students enjoyed a variety of musical styles and might like the chance to work on individual vocal development and a piece of music that spoke to them personally,” Dietrich said, “so we decided to do a video cabaret, featuring music, song, dance, or drama. Each student chose their own song, which I then purchased for them to use, and they had several individual coaching sessions with me to prepare for the performance.”

Students recorded their own videos, which Dietrich uploaded to YouTube and compiled into one “show,” which the classes gathered to watch together virtually.

“I truly enjoyed the light-heartedness some of my students brought to the table in their interpretations and their staging, and also the deep feeling and musical sensitivity and instinct they demonstrated.”

A hidden benefit: “I like that my students had the challenging experience of being confronted by the honesty of a recording,” she said. “When we’re in rehearsal, they rely on me for feedback. I work hard to focus on the positives and play to our strengths. Recording devices have no tact. It was a good learning experience.”

Another positive outcome: “I think the group that participated in the cabaret now feel more connected to one another and have a greater understanding and appreciation of one another’s skills and contributions than groups that have met in person all semester long.”

The show must go on(line)

Cassano was able to transition her theatre and acting classes to a remote format, with some courses proving more challenging than others to teach from afar.

“Intro to Theatre students were already planning to do group projects when they returned, so it was easy enough for me to give them extra time to meet on Zoom,” Cassano said. “I recorded my own videos they could use as an example, set up discussion threads, and was able to do a few online exams. All in all, it went smoothly.”

Cassano’s musical theatre students worked on solo projects and, in an unusual way, benefitted from one aspect of the COVID shutdown. “One of the nice things was that many different outlets released recordings of live performances online, so my students had access to many more musicals than they would normally have,” she said.

Fundamentals of Acting was a more challenging class to teach remotely. “It’s hard to demonstrate more detailed acting methods for them,” she said. But, again, the collective problem inspired global collaboration. “A large number of theatre professionals created Facebook group
pages where we could share remote teaching methods and ideas,” she said.

Ultimately the biggest hardship for Cassano and her students was canceling the spring musical they had worked so hard on. They have tentative plans to perform it in the fall, if guidelines allow. “I spoke with each of the seniors who were cast in the show and decided if they could swing it, they could participate in the show if we are able to do it in the fall.”

A band or ensemble is literally a group of people making music together. What do you do when those people can’t be in thesame room, city, or state?

“I sent band members new music to work on individually,” Viebranz said. “These were short works, about two minutes long. The percussion piece didn’t call for traditional instruments; students could create their own from common household items.”

The initial plan was straightforward (learn the music, record it, send it to Viebranz) and was based on a three-week absence from campus. Once it was determined that the rest of the semester would be remote, Viebranz pivoted.

“Students were presented with an asynchronous project that explored the elements of music through short vocal improvisation on various topics,” he said. “Finished work was uploaded to create a repository of sound files. These were then assembled to create a ‘sound collage,’ with the final product being a four-movement ‘Remote Motet’ on the theme ‘Behrend is …‘”

Viebranz’s students came together, virtually, on the scheduled concert date to see and hear their composition. They closed out the semester with a virtual alma mater, inviting alumni to join current students in creating a performance video for commencement.

Though the virtual performances exceeded Viebranz’s expectations, he looks forward to a return to normal. When they can practice in person again, he plans to play the pieces the students worked on remotely in an effort to bring some closure to the remote experience.

“Conducting to a video camera is an empty, solitary feeling, and recording a single part in isolation is unfulfilling for most,” he said. “A large ensemble is greater than the sum of its parts; it’s our awareness, responsiveness, and collective interaction that turns something technical into something artistic, something human. Music should be personal, but it shouldn’t be lonely.”

Though the virtual performances exceeded Dr. Gary Viebranz’s expectations, he looks forward to a return to normal. When they can practice in person again, he plans to play the pieces students worked on remotely to bring closure to the remote experience.

“Behrend is….” A remote performance by the Penn State Behrend Concert Band.