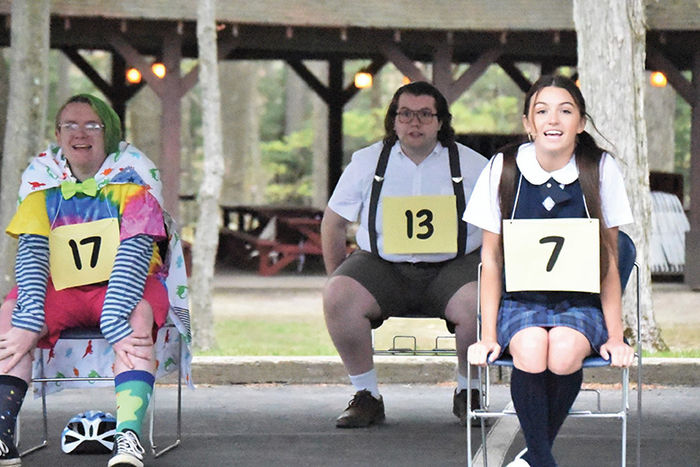 In the spring, Emily Cassano, assistant teaching professor of music, theatre, and visual arts, needed a show with a small cast that would have limited physical interaction with one another. She chose “The 25th Annual Putnam County Spelling Bee.”

How do you put on a musical during a pandemic when you can’t have a show indoors and audience (and cast) members can’t be within six feet of one another? You put up tents in the Wilson Parking Lot on campus and hope for decent weather. In April. In Erie.

It probably goes without saying that Emily Cassano, assistant teaching profes­sor of music, theatre, and visual arts, was more stressed than usual trying to pick and pull off a spring musical.

Cassano needed a show with a small cast that would have limited physical interaction with one another. She chose “The 25th Annual Putnam County Spell­ing Bee,” by Rachel Sheinkin and Wil­liam Finn. The musical is a celebration of twitchy middle-school awkwardness: One contestant, beset with allergies, traces the letters with his foot as he spells each word. Another speaks six languages and can say “hello” in seven more but can’t manage even a basic conversation with a boy.

The show, which is typically set in a middle-school gymnasium, required minimal staging. Cassano made one adjustment to maintain physical distanc­ing: Rather than sit the “contestants” on bleachers, where they would wait their turn to spell, she positioned them in chairs, spaced nine feet apart. The audience members sat seated socially distanced in a second tent.

The show was a hit, with all but one performance sold out, from the first one when it snowed to the last one, three days later, when it was 60 degrees. That’s just April in E-R-I-E.