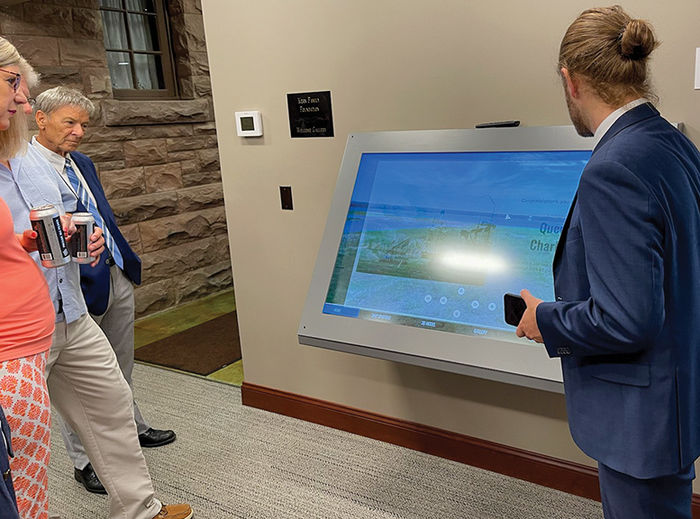 When Commodore Oliver Hazard Perry commanded a nine-ship U.S. fleet in the Battle of Lake Erie in September of 1813, he relied on one of the most basic enemy-locating devices—a telescope.

That telescope, valued at nearly $100,000, was recently acquired by Erie’s Hagen History Center, where it is on display along with Perry’s sword, scabbard, belt and a lithograph.

In the age of global satellite position­ing systems and drones equipped with cameras, it’s hard to imagine what it might have been like for Perry to spot far-off British vessels using one eye and a spyglass. But an interactive display next to the telescope, created by Penn State Behrend’s Virtual/Augmented Reality (VAR) Lab, gives visitors a chance to see through Perry’s eye, virtually.

“Gone are the days of an object and a label in museums,” said George Deutsch, executive director of the Hagen History Center. “Museums today are much more interactive, with graphics and components that offer visitors a way to engage with the items on display.”

Deutsch formed a partnership with Behrend’s VAR lab after its director, Dr. Christopher Shelton, assistant professor of clinical psychology, and Jasper Sachsenmeier, lecturer in English composition, reached out to the center in search of collaborative projects for faculty and students.

“We had done some work for the local Fort LeBeouf Historical Society, and we thought other historical societies might be interested in working with the VAR lab as well,” Shelton said.

“We started with the telescope project because Jasper and I could do much of the work ourselves as the students’ time in the VAR lab was limited during the pandemic,” Shelton said. “As restrictions eased this summer, though, we were able to bring students onboard in a greater capacity.”

“The task of the Perry project was to create an immersive exhibit,” he said. “With completion of Phase 1, we now have an interactive exhibit showcased on a touchscreen 55-inch monitor next to the physical exhibit.”

Users can play an “eye-spy” game that illustrates how limited the view is through a telescope while they search for ships involved in the Battle of Lake Erie. When they spot a ship, they can tap on it to learn more about that vessel.

The display also offers a 3D scan of the telescope, allowing users to view it from all angles and get an up-close look at the inscription on the telescope, which commemorates Perry giving it to his friend, Major General William Henry Harrison, who served in the War of 1812 and later became the ninth president of the United States.

An original 1839 color lithograph of Perry and Harrison is also on display. Printed the year before Harrison ran for President, it depicts the pair at Harrison’s famous victory over the British-Indian confederation at the Battle of the Thames in southern Ontario. It was at this battle that Perry lent Harrison his telescope.

Other elements in the interactive display include galleries of exhibits related to the Battle of Lake Erie and the individuals and ships involved. More is planned for the future.

“We have a roadmap for the Perry project, to create an even more im­mersive and detailed exhibit in the next phases,” Shelton said.

Additionally, the VAR lab is working with the center on other exhibits, includ­ing an Erie Extension Canal project that had to be put on hold.

“We are looking forward to working with Behrend and the VAR Lab to help us make history inspiring,” Deutsch said. “They put a tremendous amount of ef­fort into the telescope project, and we’re excited about future collaborations.” 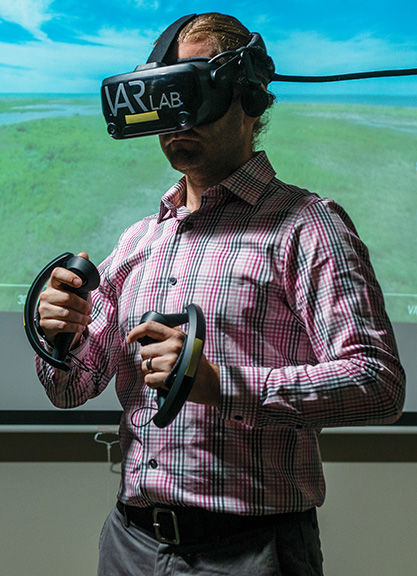 You may be surprised to learn that psychologists work with virtual/aug­mented reality (VAR) and virtual reality (VR) technology. Many people might associate it with engineering only.

But Dr. Christopher Shelton, assistant professor of clinical psychology, ex­plained that some of the earliest work in VR was done by psychology researchers who were trying to help treat combat veterans suffering from Post-Traumatic Stress Disorder.

“They used VR to do exposure therapy with veterans,” he said. “More recently, we are seeing a lot of research suggest­ing that this type of technology can be quite effective at helping to address a wide variety of mental health issues including overall wellness and stress management.”

Shelton said his personal interest in virtual technology stems from a desire to help reduce barriers to mental health support.

“I call them the 4 As: accessibility, availability, affordability, and acceptabil­ity,” he said. “Digital mechanisms can help address these issues. Some of my past work, for instance, has examined using algorithms to tailor internet-based interventions for college students and emerging adults with ADHD in an effort to increase treatment availability and acceptability among this population.”