Master of Speech Communication Has Left the (Kochel Center) Building 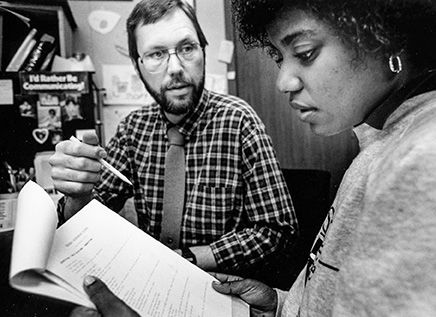 As the quote attributed to the Greek philosopher Heraclitus, goes, “The only constant in life is change,” and Dr. Rod Troester, associate professor emeritus of speech communication, saw plenty of that in his thirty-five-year tenure at Behrend. Troester, who taught a variety of speech communication classes, including public speaking, retired this summer.

“When I started in 1986, there wasn’t much on campus above the Niagara and Lawrence residence halls and nothing on the other side of Jordan Road,” Troester said. “Behrend has doubled in size and de­veloped into an incredibly vibrant place.”

His field of study, too, has undergone tumultuous change, especially in mass media, in the last few decades, but Troester said the fundamentals of com­munication remain the same.

“The basics of forming a message and conveying it have not changed, although the technology and tools we use to do it have,” he said. “Where once you might have written an op-ed to reach a lot of people, now you can write a blog post or online article and share it through a half-dozen social media chan­nels to reach your audience.”

We talked with Troester to get his perspectives on three-plus decades of teaching at Behrend.

Best days at Behrend: Every semes­ter, the best days on campus were the first day of classes and commencement. The energy and excitement were always palpable.

On the rewards of his work: We have a Facebook group (Penn State Behrend-Communications Department Alumni) with nearly 350 alumni, and it’s really great to share in their success and see where life takes them.

On the rise of social media: It’s helped connect people and given a voice and community to groups that didn’t have an easy way to find one another before. That said, many of today’s students, who are the most connected ever, also suffer from anxiety and depression. I think some of the anxiety comes from comparing their real lives with what they see online.

On the prevalence of disinformation and the need for editors: In a way, it’s self-correcting. As people find ways to spread disinformation, others will find ways to combat it. What we suffer from online is a lack of editors. Anyone can publish anything and spread it. There is a big difference between an editor and a censor, of course. A censor is guided by conduct and morals. An editor is guided by standards, truth, and verifiable facts.

Nonprofits = opportunity: The best internships for Communication majors are often with organizations that have no budget to pay them. Students usu­ally are tasked with more work and gain more experience than they might at a large company.

On communication tools: On a trip back from the airport with my son, I watched him working on his laptop, and I was thinking about how my wife, Judy, and I bought one of the first word processing systems in the 1990s. The advancement in communication tools in my lifetime is stunning.

On polishing that elevator speech: Your education and experience will get you an interview, but soft skills will often get you the job.

There’s no right way to do life: Stu­dents sometimes struggle because they have come up through an educational system where everything has a rubric, so their “failure” or “success” can be easily measured. Real life isn’t like that, though, so they have to define the best way for themselves.

It’s OK to love Erie: When I took the job, I never thought I’d be here this long, but it became our home. Erie has a lot going for it.

Find him on the lake: I have a 34-foot sailboat I plan to spend more time on. I also serve as a volunteer crew member for the U.S. Brig Niagara and the Lettie G. Howard, educational sailing vessels in Erie. I enjoy going out in the lake and showing people the city and Presque Isle from that vantage point.