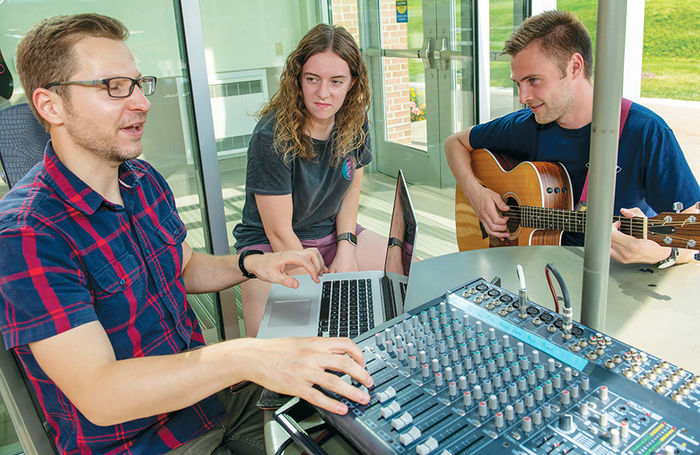 Humans excel at categorizing things because it makes life easier. Thinking is less taxing when we have shortcuts. That’s why many of us fully embraced the “left brain/right brain” theory of learning. If you’re mostly analytical and methodical in your thinking, you’re left-brained. If you tend to be more creative or artistic, you’re right brained.

But the theory, often simplified into math-and-science- or humanities-minded, has done us a disservice. Engineers are in­herently creative, required to think outside the box. Conversely, music is mathemati­cal, demanding precision and timing.

That’s why the humanities and social sciences have a critical role across the educational spectrum. At Penn State Behrend, not only does the School of Humanities and Social Sciences serve those majoring in the programs offered by the school, it also meets the needs and interests of students in the STEM fields and business who complement their career plans with H&SS studies.

Alison Huffman is a senior Computer Engineering major, and Adam Boaks is a senior Biology major at Behrend. They are also musicians and songwriters who re­cently released their first album, For Your Glory, at the request of The Cross, an Erie church that Huffman and Boaks attend.

The pair wrote and performed the songs, all taken from the Bible’s Book of Psalms. They also played all of the instruments and handled vocals, as well. When it came time to mix it all together, they enlisted the aid of Dr. Joel Hunt, associate teaching professor of music and digital media, arts, and technology.

“My role was that of a mix engineer,” Hunt said. “I edited many of the audio tracks that Alison and Adam recorded and used plug-ins in Pro Tools to give the recording a more professional sound. I also used advanced mixing techniques to ensure that all of the voices and instruments were balanced and clear.”

“What an artist initially records into a microphone is completely unedited,” Huffman said. “Dr. Hunt had a lot of plug-ins and techniques to help us make it sound much better.”

Huffman, who is also working on a Music Technology minor, was even able to earn college credit for the project. Though the minor is offered at University Park, she was able to fulfill the course requirements taking classes with Hunt at Behrend. That included INART 258A Fundamentals of Digital Audio and a variety of independent studies.

“When we were trying to find an independent study topic for Alison, I learned about the album she was making with Adam,” Hunt said. “We thought it would be a great way to dig deeper into music production.”

Hunt was impressed with the work they had already accomplished on For Your Glory.

“I had known Alison as a drummer because she plays with the Penn State Behrend Jazz Ensemble, which I direct, but I didn’t know that she also played piano, sang, and wrote songs,” Hunt said. “Adam had taken my MUSIC 8 Rudiments of Music course and done very well but, again, I didn’t know he was such a gifted singer and songwriter.”

Huffman has had plenty of practice blending music and engineering. She’s been working for two years as a computer engineering intern at AcousticSheep, creator of SleepPhones, headphones that are designed to lull wearers to sleep. Huffman works on the SleepSounds app, which uses artificial intelligence to generate sleep-inducing music, rhythms, and sound patterns.

After the album was mixed, Huffman and Boaks handed it off to a distributor for final mastering and to set the levels required by Apple, Spotify, and other platforms. The album was released this summer and is available on any major music streaming platform by searching for “The Cross Worship” and For Your Glory.

Students Can Make Their Own Music

In Dr. Joel Hunt’s INART 258A Fundamentals of Digital Audio, students learn the concepts and skills needed to produce professional-level recordings. By the end of the semester, each student has made a Spotify-ready original song! Once they’ve taken the course, students have access to all of Behrend’s audio re­cording equipment, including microphones, audio interfaces, MIDI keyboards, and Pro Tools digital audio production software.