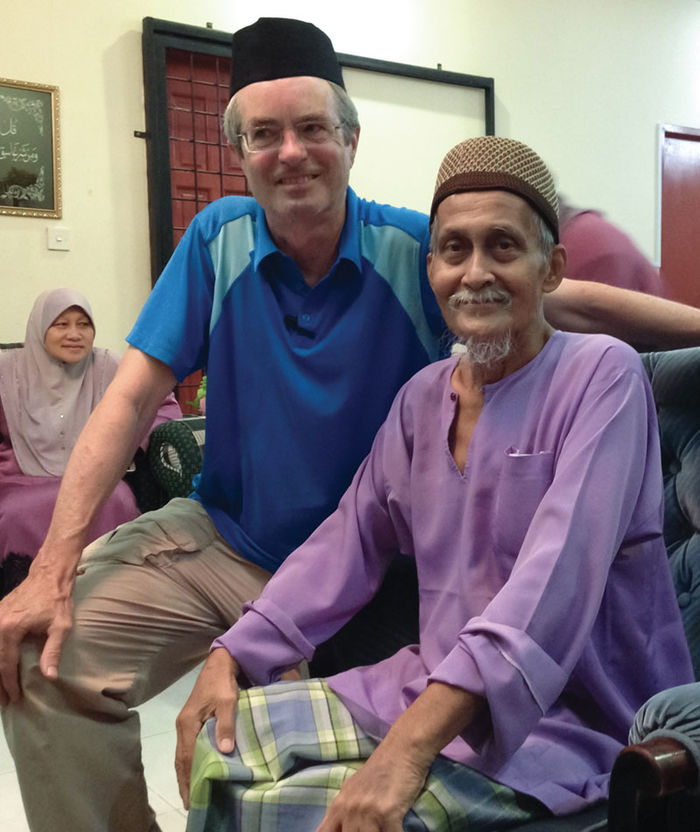 Jonathan Hall, associate teaching professor of physics, and a former colleague, Wan Masa, who taught with Hall in North Borneo forty years ago.

Jonathan Hall, associate teaching professor of physics, began his career halfway around the globe as a Peace Corps volunteer in Malaysia in the late 1970s. There, he taught his first students at the only secondary school in the Sipitang district of Sabah, formerly known as North Borneo.

Forty years later, Hall returned to his teaching roots along with his daughter, Liz, where they caught up with several of Hall’s former students.

“Malaysia was formed from a collection of colonies in the early 1960s,” Hall said. “In order to develop as a nation, expanding education from the few to the many was the number-one priority of the government. To accomplish this, they ‘imported’ teachers from other countries to teach, especially math and science, in rural areas, which is how I came to be there as a Peace Corps volunteer.”

As in many other Asian nations, a student’s academic success and future career is largely determined by the results of national standardized exams, which are given in ninth and eleventh grades. Math is a mandatory pass. If you fail the math exam, that is the end of your education.

“Unfortunately, because they lived in remote areas, many of my students didn’t have qualified math teachers in their early years and had a lot of catching up to do,” he said.

Hall worked with his students in and out of regular class time, often hosting additional study sessions in the evening and on Saturdays.

The extra effort paid off for several of Hall’s students, something he learned on his return trip.

After a fourteen-hour flight and a recovery day on the beautiful beaches of the South China Sea, Hall and his daughter had dinner with a group of his former students who live and work in Kota Kinabalu, the capital of Sabah.

“Several of my students had come to high school unprepared in math, but learned and became proficient enough to pass their exams, which allowed them to move on to careers in teaching, nursing, banking, business, and law,” Hall said. “It was awesome to find out what a difference a teacher can make.”

Reaching new heights with another grad

On his third day in Malaysia, Hall met up with one of his most successful former students, Daring Laban. Laban is the manager of Sabah State Parks, a group of parks that host 1.3 million visitors a year.

“When I taught Daring, he lived in a remote village, Long Pa Sia, close to the Indonesian border,” Hall said. “Students from his village traveled five days on foot through the rainforest to attend secondary school, where they lived in a dormitory.”

During the reunion visit, Hall and Laban met at Kinabalu Park and climbed Mount Kinabalu, where they traveled through four climate zones before reaching bare rock and the mountain’s peak at 13,400 feet. They celebrated with a post-climb feast at an open-air restaurant that specializes in wild boar.

In the village of Long Pa Sia, Hall and his daughter spent one day hunting and fishing with another former student. They attended a wedding in Sarawak and found time to sightsee in between. In Sipitang, he had dinner with more students and a former colleague, science teacher Wan Musa.

“Forty years ago, I attended Wan Musa’s wedding, where I was the Malay equivalent of his best man, which included having his face and mine smeared with rice flour,” Hall said. “It was great to see him again.”

The warm reception Hall received after forty years may surprise some people, but Hall said it’s not unusual in Malaysia for bonds to span four decades.

“They are very hospitable people,” he said. “It is part of a way of life there. Forming relationships with others and strengthening them is valuable and important in their culture.”

While Hall taught his students science, math, geography, and English, he said they taught him an important life lesson.