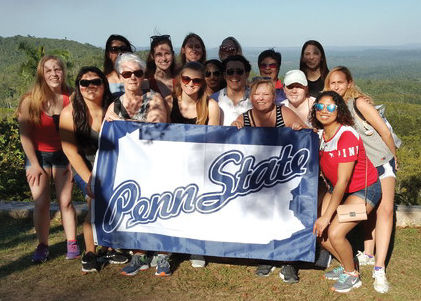 A tour of a Cuban mental-health facility left Megan Cavanaugh in awe.

Everywhere she looked, she saw papier-mâché artwork that had been created by patients, and throughout the building, she heard the sounds of some of the very same patients making music.

The experience of seeing how everything at the facility was focused on tapping into patients’ skills and talents left the Pittsburgh native and her tour companions in tears.

“Cuba’s big goal in their mental-health facilities is to reintegrate patients into society. They find a patient’s talents and have him or her pursue them,” said Cavanaugh, a senior nursing major. “At the end of the tour, we could not help but cry. The doctor asked us if we had suggestions, and no one could come up with anything because it was so well done.”

Cavanaugh’s takeaway is an example of why she and twelve other students from three Penn State locations—Behrend, Hershey, and University Park—visited the country over spring break. As part of the embedded course NURS 499: Foreign Study, students traveled to Cuba’s capital of Havana to tour health clinics and learn about the country’s health care delivery system.

The goal was for the students to compare the Cuban system to that of the United States while also exploring ways to learn from Cuban practices.

“It’s part of the College of Nursing’s Strategic Plan that we increase our students’ academic travel, so they not only gain an increased understanding of diversity but also become more academically astute,” said Carolynn Masters, an associate teaching professor of nursing at Penn State Behrend who traveled with the students.

“Every day we were there, we were immersed in the health care system and the challenges the country faces,” Masters said. “It was very altering to the students. You could see their eyes opening, and then their minds, and then their hearts.”