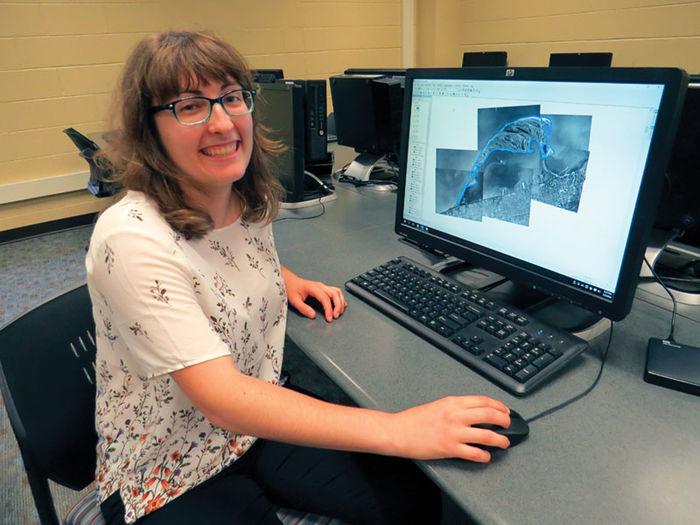 Julia Guerrein, a senior environmental science major, spent a summer mapping the shoreline changes to Gull Point at the tip of Presque Isle. Using Geographical Information Systems (GIS), she made six maps (above) that show how much the peninsula has changed between 1939 and 2015.

Though you won’t find it on any campus map, Penn State Behrend has a 3,112-acre laboratory nearby.

Presque Isle State Park, a sandy peninsula that juts into Lake Erie, draws four million visitors a year. Not everyone is there to enjoy a day at the beach. Some, including many School of Science students, faculty members, and alumni, are there to work, learn, and do research.

Lake Erie is a tremendous resource for scientists at any stage in their career.

Julia Guerrein, a senior environmental science major, spent a summer mapping the shoreline changes to Gull Point, at the tip of Presque Isle. Using Geographical Information Systems (GIS), a sophisticated mapping software, Guerrein made six maps that show how much the peninsula changed between the years of 1939 and 2015.

“I took aerial photos from an online digital database and pieced the photos together using the software,” Guerrein said. “Then I traced the peninsula and Gull Point alone to look at the change in the area and perimeter of the total park.”

Layering the new and old maps effectively illustrates how humans and nature have changed and influenced the shape of the park over the years.

“I found that the area of Gull Point increased by almost 200 percent, which is significant in regards to an ongoing debate about sand replenishment and the breakwaters at the park,” said Guerrein, who worked with Dr. Michael Naber, associate teaching professor of geosciences, on the project.

Guerrein and Naber built on research that had been done by Dr. Pam Silver, distinguished professor of biology and interim associate dean for academic affairs, in the 1990s. “Dr. Silver did a similar project that was focused on wetlands at the park in 1996, but she didn’t have access to GIS at the time,” Guerrein said.

This summer, Guerrein traveled to Toronto to present her work at the International Association of Great Lakes Research conference. She also plans to share her findings with Erie and Presque Isle State Park officials.

“My maps can’t influence policy change on their own, but they are a useful tool for other studies,” Guerrein said.

It would be impossible to list all of the research projects underway by School of Science faculty members at Presque Isle or in Lake Erie. In every program, from mathematics to environmental science to physics, faculty members are doing research work in, around, or about the lake. Here are just a handful of recent and current projects:

Dr. Michael Rutter, associate professor of statistics and assistant director of the School of Science, is working on a predictive, weather-based model to help park managers identify when high levels of E. coli might be present in the water.

Many School of Science alumni, particularly those who get their feet wet (pun intended) doing undergraduate research work in Lake Erie, go on to work at Presque Isle State Park or for the variety of environmental and government agencies that serve the Lake Erie region.

To learn more about Presque Isle State Park and the scientific research work underway there, visit trecpi.org and click on “A Place to Teach and Learn.”