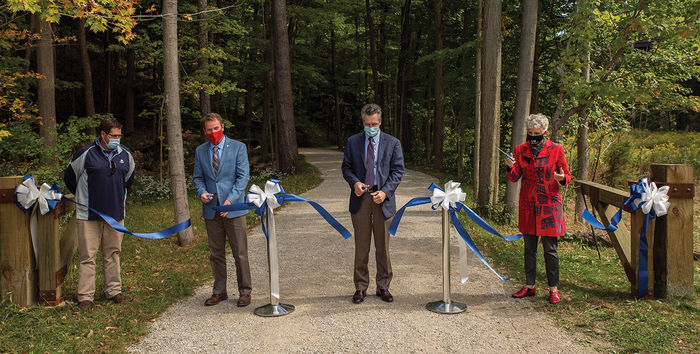 This past fall, Penn State Behrend formally opened the renovated trail system in Wintergreen Gorge, a Natural Heritage Area on and adjacent to the Behrend campus, with a ribbon-cutting ceremony.

The event, which was limited in attendance due to the pandemic, marked the completion of a $690,000 project, intended to reduce erosion in the gorge while improving public access to the property, which is now ADA-accessible for the first time.

The improvements include a 165-foot boardwalk, which extends the primary trail over a wetland area. The structure will encourage visitors to remain on the trail, which is the spine of a 14-mile network of pathways that include informal “shortcuts,” which have accelerated erosion in the gorge.

The primary trail has been topped with a compacted aggregate, making it accessible to visitors in wheelchairs and those with strollers. The project also created a new trailhead at Cooper Road, where a parking area now offers space for seventeen vehicles.

Behrend has secured $380,000 in funding for the next phase of work, which will begin in the fall of 2021 to extend the aggregate-topped path to Trout Run.