Teaching in The Time of Covid 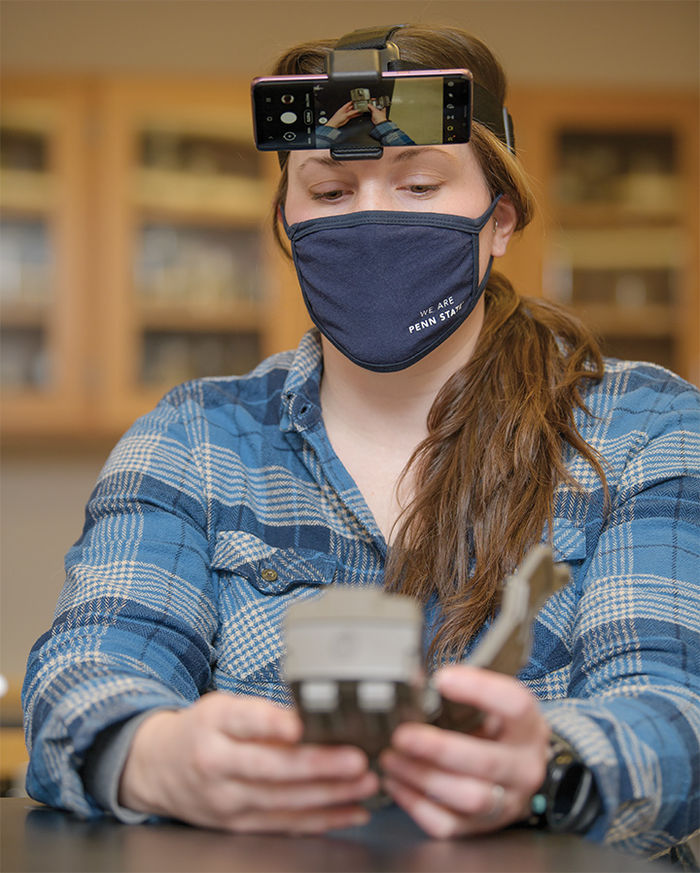 Dr. Lynne Beaty, assistant professor of biology, experimented with the best way to teach a lab remotely. She found that using a cell-phone head mount gave students the best perspective, giving them a first-person view of Beaty’s hands as she went through the steps of the lab, mimicking what they would see if they were doing the lab themselves.

Scientists are creative by nature, so it should come as no surprise that when faced with the challenge of teaching remotely, many of the college’s School of Science faculty found innovative ways to convey concepts they would otherwise have been teaching in person.

“It’s been hard for students and faculty members alike,” said Dr. Lynne Beaty, assistant professor of biology. “We’ve all had some struggles, but I like to think that this pandemic has pushed faculty members to be more creative in how we present information.”

Beaty is one of several faculty members who experimented with new methods of teaching, some of which, they say, worked so well they plan to continue using them.

How do you teach a hands-on laboratory class when students are spread out across the country without access to a lab?

“I tried to create various lab experiences using photos and videos to emulate what students would see and do if they were completing the lab in person, but my most successful attempt was a lab in which I used my cell phone strapped to my forehead with the video camera recording while I completed the lab,” Beaty said.

A $17 head mount, into which her cell phone fit, outfitted with a Velcro loop on an elastic headband, allowed Beaty the use of both of her hands and gave students a first-person point of view.

“The students could see my hands completing the tasks that they would have been doing during the lab in the manner in which they would have done it,” she said, “rather than just watching me do it from a device propped up nearby.”

Beaty also found a way to structure a remote laboratory activity as a game, which she said was a hit with students.

“Using a predator-prey simulation online, students had to adjust predator and prey population parameters to try to get stable population cycles for 1,000 simulation time steps,” she said. “Regu­lar population cycles were challenging to obtain, which frustrated some students, but turning anything into a game makes it more fun.”

Dr. Jay Amican­gelo, professor of chemistry, has been teaching in a traditional face-to-face manner since he started at Behrend in 2002, and it never occurred to him to record his lectures—until the pandemic required him to evaluate how he could best cover material in a remote environment.

“I started pre-recording my lectures ahead of time and then using class time to go over assigned problems, answer questions, and so forth,” he said.

“I have always used the whiteboard to present material because it is a highly mathematical class,” Amicangelo said. “I would often feel rushed in a given class to get to a certain point in my lecture notes, but now, I have them watch the lecture in advance, then I can use the face-to-face class session to emphasize important points of the material.”

Amicangelo said this approach to teaching, referred to as ”flipping” the classroom, is a concept he had heard about but had never had the time to try. The pandemic provided the impetus.

“Once I explored it, I liked it, and I plan to continue using this method,” he said. “I think students will really benefit from the extra opportunity to under­stand and explore the material in class rather than just listening to me lecture.”

What’s more, recorded lectures made available to students give them a library of reference material.

Beaty broke it down even further. She recorded mini-lectures, three- to ten-minute presentations on specific topics, so that students could easily review a concept or something they missed in class.

“Yes, they took a little extra time to record, but the benefits to my students far outweighed the cost to me,” Beaty said. “They could go back and review a relevant mini-lecture, rather than navigate a fifty- to seventy-minute recording to find the information they needed.”

Last year, Natalie Waddell-Rutter, a lecturer in Biol­ogy, attended an online convention where participants used Discord, a smartphone/PC application that allows users to chat via video, voice, or text in real time. She said the live chat and commentary that occurred during an awards cer­emony at the convention made it highly enjoyable, and it gave her the idea to use Discord in her own class.

Although she was teaching in person, Waddell-Rutter found it challenging to ask and answer questions in her sixty-student GEOG 30N: Environment and Society in a Changing World class.

“I like to ask students questions during class, but it’s very hard to hear responses from anyone beyond the first few rows, espe­cially now that we are masked, which further muffles voices,” Waddell-Rutter said. “I thought Discord might be a way to facilitate some in-class discussion, especially since many students bring their laptops to class to follow along with the slides.”

She created a few chat rooms, such as “in class discussion” and “random questions,” and brought in her laptop, which she kept next to the computer that she was using to lecture.

“It worked really well,” she said. “If I asked a question, I would just wait for the students’ responses to start coming in and then read them off. I would also monitor the in-class discussion thread in case someone had a question during a lecture.”

She also used Discord to stream her lectures on a voice channel for those who couldn’t make it to class, and for office hours, answer­ing questions via chat box or starting a video window if students had more in-depth questions that required visuals.