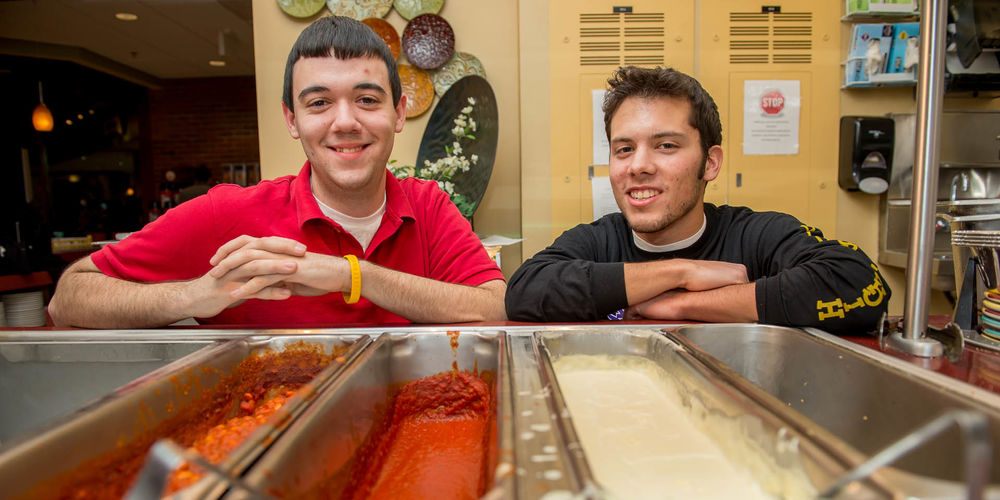 As the dinner hour at Dobbins Dining Hall winds to an end, employees take stock of what’s left on the serving line. They stick thermometers into the leftover marinara, Alfredo sauce, and rigatoni. One employee carefully records all of the temperatures while another scoops the food into recyclable aluminum pans.

Inspired to Waste Not

Steve Galdo’s stomach rumbled as he listened to Dan Quigley, director of operations at the Erie City Mission, talk about hunger in Erie. Galdo, a junior majoring in management information systems, was participating in a thirty-hour famine as part of a 2011 Lenten observation, and as he listened to Quigley (and his stomach), his thoughts drifted to Dobbins. As a Housing and Food Services shift supervisor, Galdo had witnessed prepared food being scraped into compost bins at the end of the night because, by law, once food has been on the service line, it cannot be offered to students again. He and his friend, Brian Wilking, a sophomore majoring in accounting, talked about finding a way to donate the wasted food.

“We may not be able to donate $1,000 to help the hungry, but we can donate our time and find ways to help,” Wilking said.

“Steve asked me, ‘What red tape is associated with donating leftover food?’” said Mike Lindner, director of Housing and Food Services at Penn State Behrend. “He and Brian were willing to do whatever it took to make it happen.”

Lindner expected liability to be a stumbling block, but thanks to the Emerson Good Samaritan Food Donation Act, which was created to encourage food donation to nonprofits by minimizing liability, it was not an issue. Furthermore, he learned that University Park was already donating leftovers.

“University Park had all the processes and paperwork in place,” Lindner said. “From there, Brian and Steve ran with it.”

Galdo and Wilking worked with Lindner and the Erie City Mission to hammer out the details and they also rounded up student volunteers to transport the food from the kitchen to the mission in downtown Erie. Food deliveries began in early November.

“We planned to begin with three days a week, but we had so many students volunteer to deliver that we were able to start right off with five days a week,” Wilking said.

The amount of food that is donated fluctuates; some nights there may be just a few pans of food to send because the college makes every effort to minimize waste.

But Quigley said the Erie City Mission is grateful for whatever comes its way.

“We serve 14,000 meals a month and one of the places we deliver to is The Refuge, which houses families and maxes out at thirty people, so a few pans of food is perfect for that site,” Quigley said. “We use 100 percent of whatever the students bring us.”