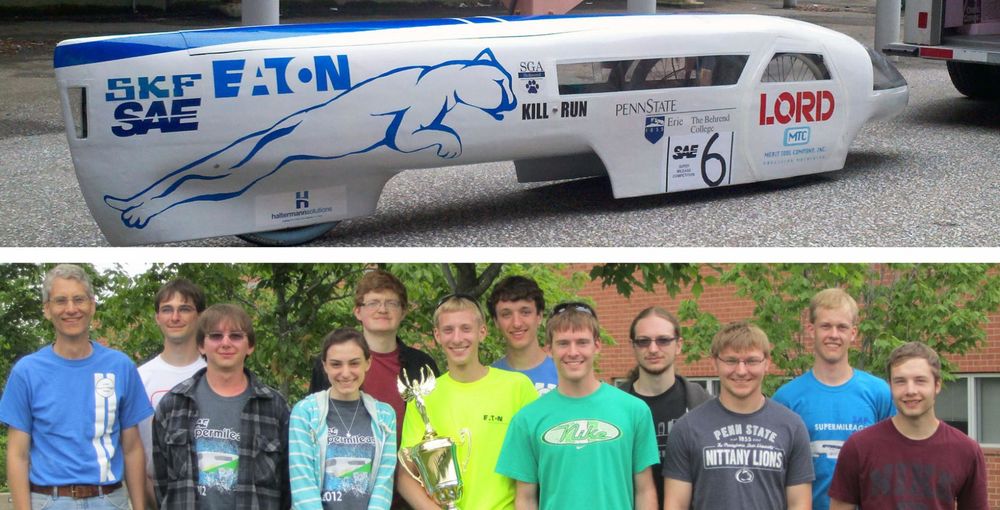 The Penn State Behrend supermileage team has again won the Society of Automotive Engineers' International Supermileage Challenge. The team's carbon-fiber test car got 1,290 miles from a single gallon of gas during the competition, which was held Thursday and Friday at the Eaton Corporation's test track in Marshall, Mich.

A car built by students at Brigham Young University did a bit better -- 1,330 mpg -- but the Penn State Behrend team dominated the design phase of the competition, putting the team in first place overall.

Twenty-eight university teams participated in the competition, which highlights the far edge of fuel efficiency.

The Penn State Behrend team also won in 2012. That car got more than 1,400 mpg -- enough to get from Erie to Denver on a single gallon of gas.

This year's car was 20 pounds lighter. Students added a leaf-spring suspension and a rotary-valve engine. They installed a trip computer, which automatically idled the engine at 20 mph. Any faster, and the car would have been less efficient.

The team paid $1,000 for four hand-made radial tires. That backfired on the Eaton track: A flaw with the wheels made the tires go flat. Team members swapped them out, mounted the 2012 tires and raced again.

In the end, that was good enough. The team edged Brigham Young at the final point count, as they did in 2012.