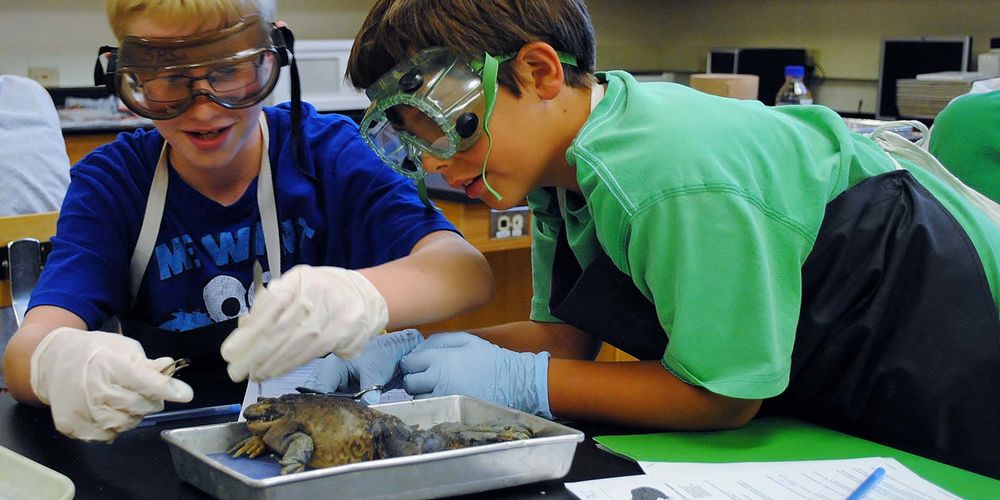 When his partner cut the frog open, Jimmy Lucas got a whiff of preservative: a stinky, nose-crinkling chemical odor.

“That is nasty,” he said, turning his head.

Then it passed, and he turned back, and the frog was awesome, showing its heart and bladder and kidneys and vomerine teeth.

The partner, Michael Rawlings, poked at a stringy, zigzag intestine. “Looks like spaghetti,” he said.

They had waited three days for this. They had studied a live frog, which the instructor, Paul Semrau, brought in. He had set it in an aquarium, with water and soil and rocks and plants, and had talked about how everything had a job. The plants, for example, offered shade and gave the frog a place to hide.

Semrau, a teacher at Seneca High School, then brought out the microscopes. He wanted the students to see the cellular walls on a small leaf. He had designed the class, a new offering in Penn State Behrend’s College for Kids program, to introduce young students to biology. He wanted it to be hands-on, even before they got to the frogs.

“Science isn’t interesting if it’s just a textbook and a test on Friday,” he said. “There’s a lot more to it than that. I want them to see it and touch it and feel it and experience it for themselves.”

He called the class “Frog Guts: Adventures in Biology.” He prepared a seven-page dissection checklist, with questions about the glottis – a tube leading to the frog’s lungs – and the liver, which is larger than anything else in there. Then he bought a bucket full of bullfrogs.

Audra Carnes got a male frog. She knew because of the two extra openings she found below his jaw.

“He used those to call to females,” she said.

Audra is 11. She wants to be a veterinarian. She was comfortable with the dissection: She made three quick cuts, pinned the skin back and handled the scalpel to her partner, who took a deep breath.

“Remember,” Audra said, holding the tray steady, “you want to cut the frog, not my hand.”