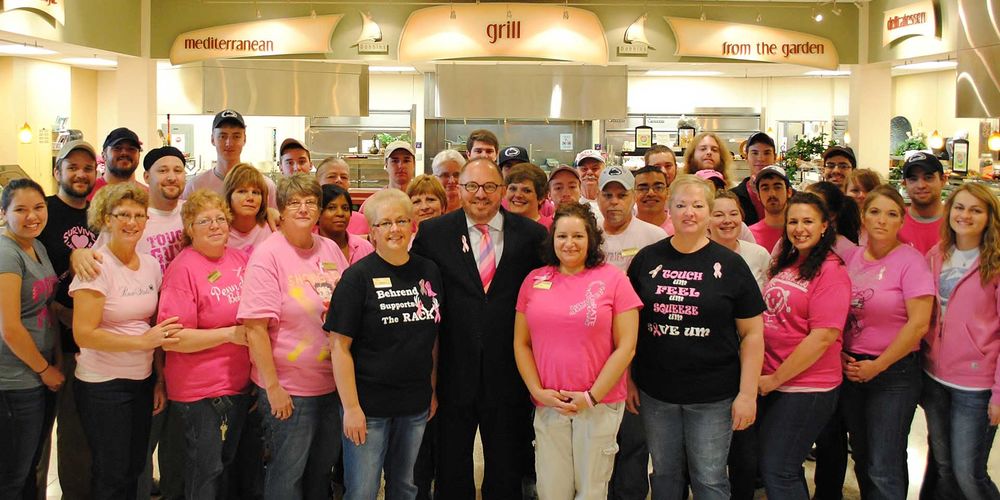 Mark Neidig was wearing a pink tie when he arrived for breakfast at Dobbins Dining Hall on Oct. 30. As the executive director of the Kanzius Cancer Research Foundation, the Erie-based nonprofit that funds testing of radio-wave cancer treatments, he wore pink on every day of October, which was Breast Cancer Awareness Month.

Some days, he admitted, he had wondered if it made a difference. But in Dobbins, surrounded by members of the Housing and Food Services staff at Penn State Erie, The Behrend College – all of them in pink – he remembered why he bothered.

“It’s such a little thing,” he said, “but it does draw you in to the big picture.”

Housing and Food Services workers paid a dollar every Wednesday in October to wear pink. At the end of the month, they donated the money to Neidig. He came to campus to thank them, and to offer an update on the Kanzius project.

Researchers at the M.D. Anderson Cancer Center at the University of Texas have been testing the effectiveness of noninvasive radio waves on sick pigs. The animals show no side effects, Neidig said.

“This is the news we have been waiting for,” he said. “Our researchers say it works.”

The Penn State Behrend pink campaign was coordinated by Rhonda Reynolds, a snack bar worker and founder of the Housing and Food Services Community Service Team. The group purchases Christmas gifts for needy children. Members also have organized a beach cleanup and a book fair. Their various dress-down days – tie-dyes, camouflage and playoff hockey jerseys – have raised money for the Wounded Warriors Project, the Shining Star program and the Susan G. Komen for the Cure foundation.

“You don’t need to have a lot of money to help,” Reynolds said. “A dollar or an hour goes a long way when lots of people give.”