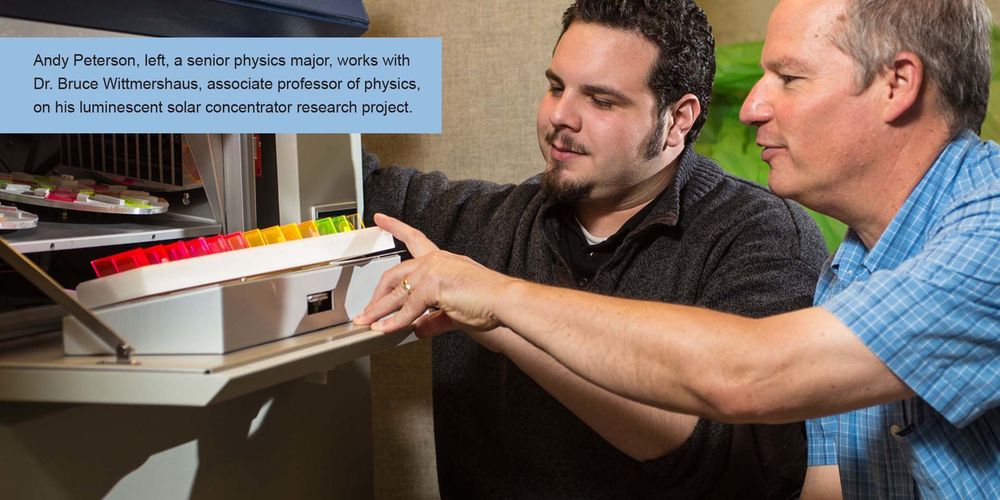 The problem with solar energy is that it’s expensive. Sunlight is free, of course, but the technology and mechanics required to turn that power source into useable energy is a costly investment that few consumers are willing to make, even if it’s better for the environment.

But what if researchers could find a way to reduce the cost of solar energy by taking advantage of laws of physics, such as total internal reflection, and simple common sense, such as putting the expensive stuff on only the edges where the maximum amount of light is emitted?

That’s exactly what Dr. Bruce Wittmershaus, associate professor of physics, has been working on for the past sixteen years with the help of $330,000 in National Science Foundation grants and three dozen physics students along the way.

He’s clear that their work on luminescent solar concentrators is not about efficiency, but affordability.

“We’re not trying to make solar energy more efficient,” he said. “In fact, the surface of these panels might be four times the size of a regular solar panel, but they’d be cheaper to manufacture because the solar circuitry is only on the edges.”

The edge is where the most power lies. Wittmershaus holds up a transparent orange clipboard and asks: “Where is the light coming out of this clipboard the brightest? Seventy percent of the light emitted is concentrated on the edge. So why not collect energy on the top of the panel and harness it on the side where it is most abundant?”

So Wittmershaus has designed compact panels to be adhered to the edge of the light-collection panel.

Andy Peterson, a senior Physics major, has been working with Wittmershaus on his luminescent solar concentrator research project for two years. With plans to earn a Ph.D. in atomic physics and spend his years doing research work in the field of macroscopic quantum systems, Peterson says his undergraduate research experience is invaluable.

“Not only have I learned about fluorescence, molecular excitation states, non-radiative energy transfer, surface chemistry, nanoplamonics, and laboratory equipment, but I’ve learned about things like time management, planning ahead, the scientific research method, and how to write grant proposals.”

Wittmershaus says use of luminescent concentrators to collect solar energy on a large scale is not likely for a least a decade. There are problems to be solved.  The concentrators must be improved to withstand decades of outdoor exposure.  Fluorescent organic dyes degrade in the sun, usually not lasting more than a year or two.

Currently, Wittmershaus is experimenting with coating gold nanoparticles in a layer of silica molecules that can be injected into the florescent panel as a way to maximize the photostability of the dyes. It’s the next step in making solar power from luminescent concentrators more cost effective.

He was recently awarded a third NSF grant for $226,000 to continue his work to harness the power of the sun and reduce our dependence on fossil fuels.