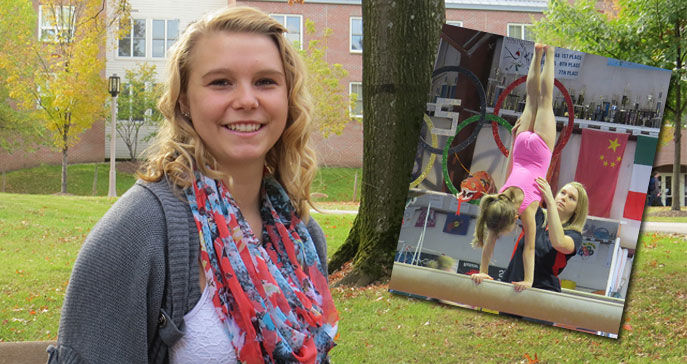 Bryanna Pierce was a competitive-level gymnast when a routine health exam at school revealed an S-shaped spine that would thwart her dreams, not just once but twice. Her scoliosis diagnosis at the age of 12 put an end to her gymnastics aspirations and, later, her plans to enlist in the U.S. Air Force.

All was not lost, though. Pierce said her experiences eventually led her to Penn State Behrend’s Nursing program.

“When I was first diagnosed, I spent a lot of time with doctors and nurses and they were so kind,” she said. “I was very emotional back then because gymnastics was all I had ever known, and I knew that eventually I wouldn’t be able to compete anymore.”

Through her teen years, she endured a battery of tests and wore a series of back braces to prevent the hereditary disease from getting worse. Despite these measures, Pierce said her scoliosis is so severe that she will eventually need surgery.

“They start doing surgery when you are at a 45 degree curve, and I’m not there yet,” she said. “I want to put it off as long as possible.”
While her pain and worsening scoliosis forced her to quit performing gymnastics when she was 16, she stayed involved in the sport. She coaches five nights a week at the Erie Gymnastics Center in Harborcreek.

“I really love being in the gym and coaching the kids,” she said.

It was her newfound joy for nurturing young gymnasts and her years of positive experience with health care professionals that inspired her to want to become a nurse.

She chose to enroll in Behrend because of its four-year nursing program and also because the location allows her to continue coaching.

“My plan is to become a traveling nurse to gain experience,” she said. “Then, I’d like to go back to school to become a nurse practitioner.”

For now, though, Pierce says she’s lucky to have two places that feel like home—Penn State Behrend and the Erie Gymnastics Center.