Physicists go with the flow in granular lab. 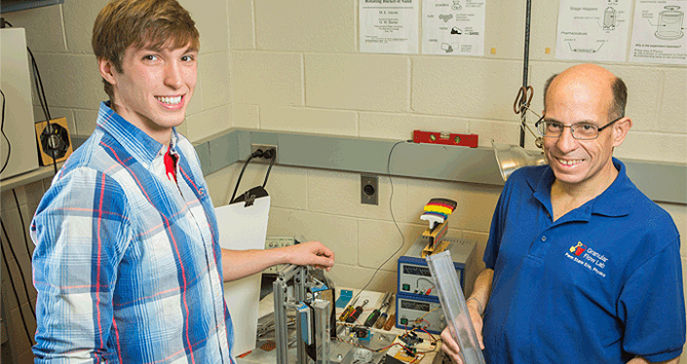 Physicists go with the flow in granular lab.

Every scientific research project begins with a question. But in the case of a project by Dr. G. William Baxter, associate professor of physics, it began with a mild case of heartburn.

“I was trying to shake some antacids out of the plastic container, but they were all clogged up in the top,” Baxter said. “I wondered what caused them to jam like that and if a different shape of pill or container would work better.”

Baxter’s question launched an extensive research project in which he, with the help of undergraduate student researchers, has been exploring the physics of moving granular materials smoothly through vertical channels. He hopes to determine what factors influence a jam and what can be done to reduce the probability and strength of a jam.

It’s research with a practical application.

“Manufacturers are always moving granular materials from one place to another,” Baxter said. “If there’s a very complex jam and they have to shut down the line or take equipment apart to clear it, it’s a big loss in productivity and, ultimately, profit.”

How can the laws of physics be applied to prevent granular jams?

That’s what Baxter and his undergraduate research assistant Nicholas Friedl, a senior dual-majoring in Physics and Mathematics, are trying to determine.

The two have been creating jams in the laboratory using custom-machined cylindrical grains of different diameters and heights (similar in size and shape to coins, pills, etc.) that fall through a square plexiglass channel. The plexiglass tube is hooked up to a motor that turns the cylinder every few seconds. A digital camera takes photos—33 gigabytes worth in less than 48 hours—to record any jams.

Looking through that many photos could take hours, so Baxter wrote a software program that does it for him.

“The program identifies only the photos that contain jams,” Baxter said. “Then we can just analyze those to see when the jam started, how long it lasted, and how complex it was, meaning how many pieces were involved in it.”

There have been some surprises.

“We learned that, in some cases, we’re dealing with electrostatic issues,” Friedl said. “Tiny grains charge up and then stick to the walls.”

Friedl, a Weedville native and recipient of the college’s 2013-14 Undergraduate Student Research Award, said he knew from a young age that he had a mathematical mind and a future in the sciences. What he hadn’t planned on was staying at Behrend.

“I thought I’d go to University Park after two years, but I stayed at Behrend because of the research opportunities,” he said. “It’s a much more personal experience here.”

According to Baxter, a lot of companies will be interested in Friedl’s experience at Behrend.

“Jamming is a known problem in the granular/powder industry,” Baxter said. “They are eager to learn which factors can cause jams and what they can do to reduce the probability of them.”

Baxter and Friedl hope to offer solutions to the all-too-common problem when they publish the first results of their project in 2015.