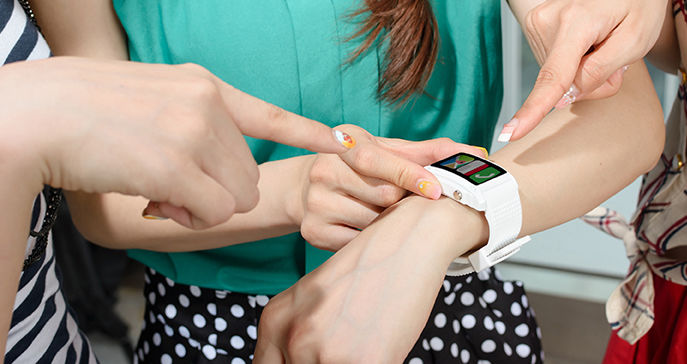 Google Glass had nothing on the VuMan 3, a portable computer worn by Marines at Camp Pendleton in 1993. The system – a processor worn on a belt and wired to a headband display – led mechanics through a 50-page inspection checklist for amphibious tractors.

The checklist had 600 data points, which took six hours to complete. A second Marine then had to transcribe the notes.

“The mechanic would crawl into a tight space, take a look, wriggle out, write down what he saw on a clipboard and then crawl back in,” said Daniel Siewiorek, who helped design the VuMan 3. He is the Buhl University professor of computer science and electrical and computer engineering at Carnegie Mellon University.

A mechanic wearing a VuMan 3 computer was able to complete large sections of the checklist without leaving that confined space. “That cut the inspection time by half,” Siewiorek said.

Siewiorek discussed the VuMan 3 and other wearable-computer projects during a recent Association for Computing Machinery talk at Penn State Behrend.

Siewiorek’s stories don’t always end well. In 1996, for instance, he and others from Carnegie Mellon tested a mobile translating device with U.S. troops stationed in Bosnia. “It was designed to do simple English-to-Serbo-Croatian translation,” he said. “Basic things, like, ‘Are you hurt?’ and ‘Where does it hurt?’”

The computer worked, but the protective casing too often was damaged.

“We used these really strong industrial-quality housings,” Siewiorek said. “We did all kinds of tests with them. You could drop one from a height of eight feet, right onto a concrete floor, and the thing would just bounce.

“We sent six units over to Bosnia,” he said. “We got part of one back.”

As director of Carnegie Mellon’s Quality of Life Technology Center, Siewiorek now works with assistive robots and wearable computers that provide health-and-wellness monitoring and mobility services. One project uses wheelchair computers to remind users to adjust their position to prevent pressure ulcers. Another allows drivers to exit a vehicle, which then parks itself.

“We’re doing a lot of work with sensors and machine learning to provide mobile systems with wearable context,” he said. “By monitoring those sensors, we can tell if people are sitting or walking. We can tell what kind of room they’re in. We can even tell, to some extent, what kind of mood they’re in.”

Last week, Google scrapped its consumer applications for Glass, the fancy eyewear that projected a tiny internet feed in front of the wearer’s eye. People weren’t ready for that sort of wearable tech.

The company has not entirely abandoned Glass, however. It will continue to work with partner firms to develop uses for the technology, particularly in medical settings. Siewiorek still sees possibility there.

“We’re talking utility,” he said. “If you offer me a portable defibrillator and say I can wear it for six weeks and live an otherwise normal life, or I can stay in the hospital, in a heart unit, I’m going to say, ‘Put it on me.’”

Recreational uses for wearable computers will follow, he said. They always do.

“It’s a social experiment,” he said. “It just takes some getting used to. Think back to before the Sony Walkman. No one then would have thought we all would be walking around with our ears plugged, listening to music. And now look at us.”