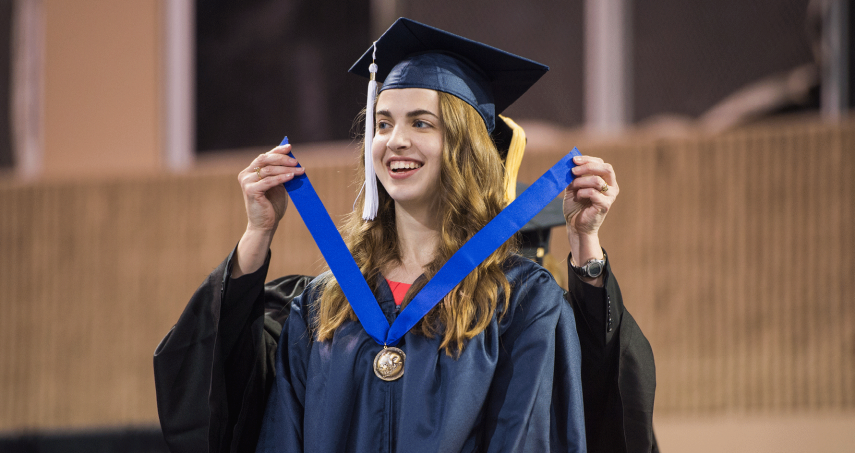 As a child, Katie O’Neill always had a keen interest in writing and creative expression. This affinity continued when she got to grade school, and it was not long before others started to notice.

“I had a teacher when I was in first grade who told my mom to get me a journal,” O’Neill recalls.

That would seem to have been excellent advice. As O’Neill has grown up, her passion for writing has become a defining characteristic.

“I’ve always been a writer before anything else,” the Lake Winola, Pa., native says.

That passion is what brought her to Penn State Erie, The Behrend College. The college’s bachelor of fine arts (BFA) in creative writing piqued her interest as the only such program in the Penn State system and one of only a few in the country.

“That was definitely the number one draw,” she says.

Through the program, O’Neill, who graduated this past May, says she was able to focus intently on improving her inventive writing skills. She also improved her editing abilities by serving on the staff of Lake Effect, an international literary journal published by the School of Humanities and Social Sciences at Penn State Behrend.

O’Neill says her inspiration comes from “the weirdest things,” but also a more traditional source: Thanks to the college’s Creative Writers Reading Series and professional conferences, O’Neill met and networked with numerous professional authors throughout her college career. With every interaction, she says she would pick up a tip or two that she put to good use.

During her time at Penn State Behrend, O’Neill was involved beyond creative writing activities. She was the captain of the college’s dance team, a member of the Behrend Choir and a writing tutor in the Learning Resource Center.

This past spring, O’Neill’s efforts were recognized with two awards: Behrend’s Eric A. and Josephine S. Walker Award and a University-wide Eclipse Award. The Walker Award recognizes a student whose character, scholarship, leadership and citizenship have been directed into student programs and services. The Eclipse Award recognizes Penn State students for service and volunteerism to their campus and local communities.

This fall, O’Neill will start pursuing her master of fine arts (MFA) in creative writing at Bowling Green State University in Bowling Green, Ohio. She reflects fondly on her time at Penn State Behrend and hopes new students will choose to follow a similar path.

“My advice is to get involved from the start," she said. "I’m so glad I got involved right away. It can be overwhelming, but it’s (worth it). I’ve made some amazing friends. I’m going to miss everything about this place.”