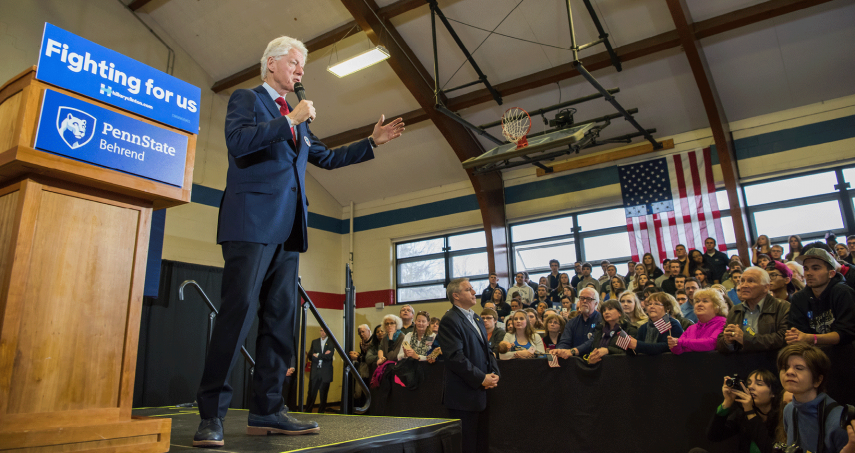 Former President Bill Clinton looked a bit older than he did in 2008, when he last visited Penn State Erie, The Behrend College. He clearly felt it, too.

“For most of my life, I was the youngest person doing whatever I was doing,” he said during an April 8 campaign stop in Erie Hall. “Then, one day, just like that, I was the oldest one in the room.”

“What happens in between doesn’t take long,” Clinton, 69, said. “It doesn’t take long to live a life. When that realization hits you, you begin to think about the future more than you do the past.”

He looked out at the standing-room-only crowd, past the pep band and the news cameras and the College Democrats and Rose Szymanski, who had come from North East, hoping he would autograph the sleeve of her red-white-and-blue leather jacket. Hillary Clinton’s signature already was on there.

“I can tell you this,” Clinton said. “I never doubted that I could make tomorrow better than today.”

For nearly an hour, Clinton spoke to a crowd of 1,200, campaigning on behalf of his wife, the former Secretary of State, who is seeking the Democratic nomination for president.

He acknowledged there was room for other viewpoints. The day before, during a speech in Philadelphia, he had sparred with a Black Lives Matter activist. He appeared to still be wrestling with the direction that had taken.

He talked through a list of hot-button issues, from the loss of manufacturing jobs and the corporate use of tax loopholes to the pressure felt by those with student debt.

Rob Speel, an associate professor of political science at Penn State Behrend, watched from the side. He had come with several students, many of whom were experiencing their first national campaign.

“This is a great opportunity for our students to see a campaign firsthand,” he said. “It isn’t often that a president or former president visits Erie, so they’re excited about that.”