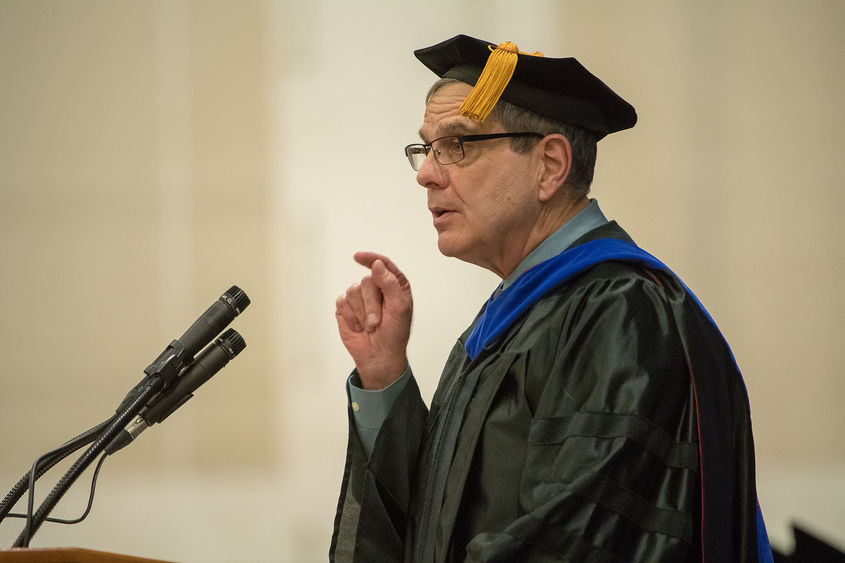 In July, Campbell was named director of the Penn State College of Agricultural Sciences’ Lake Erie Regional Grape Research and Extension Center in North East, Pennsylvania, where he will oversee efforts to transfer Penn State research on pest and disease control, growing strategies, and viability of novel crops to the state’s farmers and agricultural industries. Campbell’s research interests include applying plant dormancy patterns and sprout inhibition techniques to maximize preservation of food crops, particularly potatoes and other tuberous vegetables.

The title of his address was “Find Your Potato.”

I’m honored to be asked to speak to you today. It is interesting that we have come to a point in our society drenched with loud, raucous, and contentious dialog, that a person who has spent the last 25 years of his life studying and watching how plants sleep can still be given a voice. Now, the challenge is how to relate that experience in teaching and research investigating plant dormancy into wisdom for your success. After some thought, there are three ideas that I would like to give you advice on. Those three ideas are wealth versus success, your life path, and fear.

I want to begin by telling you a story about a vegetable. Potato is an interesting crop. Its origin is in the Andes mountains of South America, where it was, and still is, an important food source. The humble potato was brought to Europe as a curiosity in the early 16th century from the Americas by the Spanish conquistadors.

Many equate the Spanish conquest of the New World to a pursuit of riches, particularly gold, and although the Spanish did bring a significant amount of gold back to Europe, it was perhaps the potato that was the more important item. This year’s potato crop will be worth more than all the gold the Spanish brought back from the New World. Gold, which so many fought and died for, is dwarfed by the impact this odd tuber has had historically, economically, and agriculturally on the course of humanity.

Within the last 500 years, since its arrival in Spain, the potato has changed the world. It is now the fourth-largest crop worldwide, gives sustenance to billions, and altered many cultures far beyond anything the Spanish explorers could have imagined. The lesson to take away from this story is to beware the pursuit of riches alone. If you want to change the world, find your potato.

Another idea I would like to convey is that the path you take should be yours. Your path through life may not be obvious. But to always do what you are expected to do, to always follow the others, is to lose yourself. I cannot tell you what your path is, nor can anyone else, but I can relate to the challenges you may face.

During my undergraduate years as a biology major, most of my peers were destined for a career in medicine. Late one night when working on a laboratory report for a course in biochemistry, a question went around the table regarding career goals. There was a doctor, a psychiatrist, some type of surgeon, and my lab partner, who was destined for dental school.

When it came to my turn, my response was that I wanted to study plants. After a long period of silence my lab partner turned to me and said, “You know, there is always dental school.”

The conversation then resumed to how to correctly calculate the Km of an enzyme and the subject of careers was never brought up again. I still remember that conversation after many years because it demonstrates that the expectation of my peers was that my path would be similar to theirs. My path to become a plant biologist and find my potato did not register with those students. Of course, the path I chose was not direct, it shifted with the economy and other events in my life, but for what it is worth it was my path. It cannot be measured in right or wrong by anyone but myself, just as your path will be unique to you as you search for your potato.

The last idea I would like to mention is fear.

We fear things that do harm but at the same time that fear can direct us in ways that can be counterproductive. Look at the current news. We fear crime, but actually the crime rate is low and has been for 30 years. We fear terrorism, which is presented as a constant threat, when in reality there are much greater dangers to our lives that we accept without question. As a scientist, I am very concerned with the use of fear and manipulation of science for political gain. Fear of vaccines and GMOs are just a few of the scientific advances that have been distorted to scare, intimidate and manipulate. You, as Penn State graduates, hopefully have developed a level of critical and ethical thought that you will use to help guide the world away from the rancor and distortion that is currently moving through our society. You need to use your Penn State education to facilitate a more rational dialog.

Additionally, think also of how fear can prevent you from succeeding in a new endeavor. As you begin your careers, there will be times when you need to leave the safe path and follow one that is perhaps a bit scary.

One simple example I have is this speech. Imagine if you were asked to give a presentation in front of a thousand people. It is a great honor, but perhaps you are not a great orator. One of the first things you might do is to consult the internet. That search will bring up a list of great speakers who not only can give a great presentation but who also have important things to say. This might intimidate you even more.

You can choose the easy way and decline the opportunity. But you need to take chances. You have something to say that is unique from everyone else in the room. It may take time and some serious soul searching, but you will find your voice. Grab that challenge and live with the chance to fail.

You are about to embark on a great journey. There will be many challenges and opportunities. You will fail at some of these endeavors but will succeed at many. The journey will be the canvas that your life is written on, and most things you fear and fail at will eventually appear absurd and inconsequential. In fact, some of your fears and failures will eventually be a source of good entertainment as you relate them to others. In the context of your life, most fears and failures will just be small potatoes.

So in conclusion, my suggestion to you today is to keep fear from driving your thoughts and deeds, and avoid those people who try to instill fear to direct you as you move ahead; to follow your path and don’t just pursue wealth, but find your potato. It is you and no one else who lives your life.

Congratulations, graduates. May you live in a time of peace.