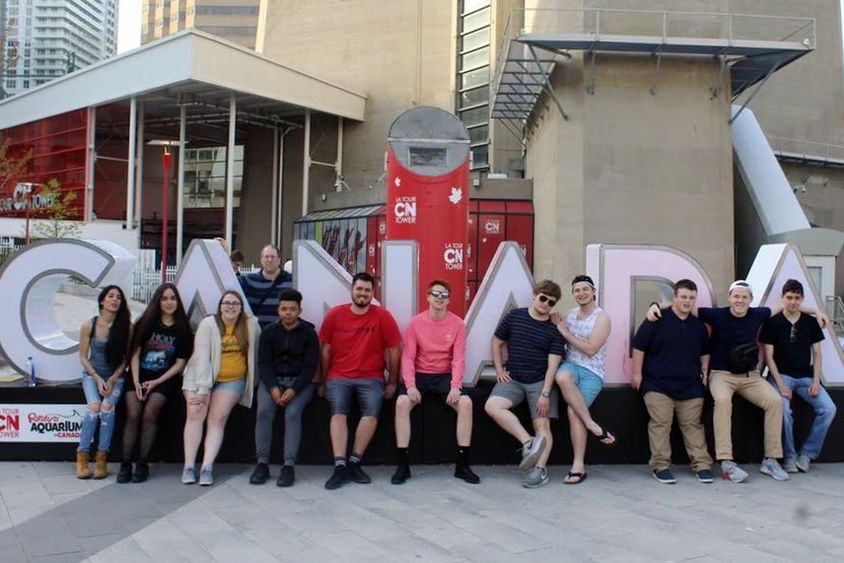 Students from Penn State Behrend visited the CN Tower in Toronto during a summer study-abroad course. They compared political cultures, government institutions and election systems during the four-week course, which was hosted at Ryerson University.

The close relationship Canada shares with the United States — both in geography and in culture — gives many Americans the idea the two countries are similar in more ways than not.

“I was a bit naive about the differences between our countries,” said Penn State Behrend student Avery Skiviat, 19, who spent a month in Toronto this summer, studying North American politics in a study-abroad course. “My perspective has changed dramatically.”

The four-week course was taught by Robert Speel, associate professor of political science at Penn State Behrend, and Greg Inwood, a professor at Ryerson University, the Toronto school that hosted the program.

Eleven students from Penn State joined students from Ryerson for the intensive class, which met in three-hour blocks four times a week. This was the seventh time Speel has led a study-abroad course in Toronto.

Speel and Inwood led discussions about American and Canadian political culture, government institutions and election systems. They didn’t shy away from controversial subjects on which the two nations differ, such as health care, guns, abortion, assisted suicide and marijuana use.

During the course, Sam Zdunski, 20, developed a friendship with a Ryerson student who was born in Pakistan and moved to Canada when he was 13. Their discussions gave Zdunski, a political science major, a new perspective.

“He opened my eyes to a lot of things that disenfranchised people deal with on a daily basis,” Zdunski said. “It gave me a lot to think about.”

Those kinds of experiences and discussions — both in class and in more informal settings — are a unique component of the study-abroad experience, Speel said.

“For many of the students, this was their first time learning about the government in any country other than the United States,” he said. “On its own, that international perspective is important, but it also gives students new ways to analyze American politics.”

Several class discussions focused on Canadian-American relations, which were straine1d during the visit by talk of tariffs and sharp exchanges by President Donald Trump and Canadian Prime Minister Justin Trudeau.

“We were teaching the class during Donald Trump’s first visit as president to Canada, when rhetoric from both sides pushed the countries closer to a trade war,” Speel said. “It made for some natural discussions that were interesting for all of us.”

Those discussions included examinations of trade, border security and the NATO alliance, Speel said. The learning continued outside the classroom: Speel took the Penn State students to local restaurants, museums and a Toronto Blue Jays game.

“Even though we were just four hours away from Penn State Behrend, we were in another country,” Zdunski said. “It was an amazing experience to be able to immerse ourselves there for a month.”

“My time there expanded my knowledge of the world and opened me up to new ideas and theories,” he said. “Above all, the chance to study abroad, the chance to learn about another country, helped me to become a better person.”