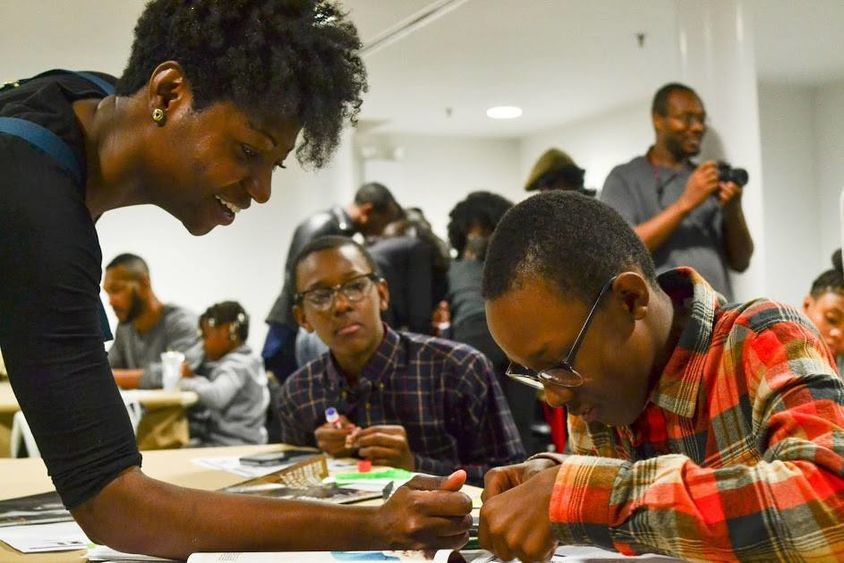 Jacqueline Jackson, a 2002 graduate of Penn State Behrend, mentors youth at the Royalty Project, an eight-week volunteer program she leads in Harlem.

Jacqueline Jackson can’t remember a time she wasn’t mentoring someone.

“It’s important because it holds me to a higher standard,” Jackson, a 2002 graduate of Penn State Behrend, said. “Knowing there are people who look to me as an example encourages me to push harder.”

As a Behrend student, Jackson, who earned concurrent degrees in marketing and international business, served in several leadership roles – as a resident assistant, president of the Association of Black Collegians and a member of student government and the Multi-Cultural Council.

When she graduated and began her career in corporate retail, she continued reaching back to help others achieve as well. She has a special interest in empowering young people, which is why, three years ago, she formed a nonprofit organization: The Royalty Project, a cultural enrichment initiative in Harlem, New York, that serves youth of color between the ages of 10 and 14.

“Mentoring kids is the fountain of youth,” Jackson said. “Children are fearless, unbiased and natural risk-takers. They are a huge inspiration to the adults who embrace and engage with them. Mentoring is truly rejuvenating.”

The Royalty project is a side venture for Jackson, who has spent the past 17 years working for retail brands: The Gap, Ralph Lauren, Coach and Kate Spade. This year, she pivoted from fashion to home décor, joining West Elm in New York City as director of inventory planning for decorative accessories.

“We had been casually discussing ways to contribute to our community and culture for some time, and we came up with the idea of a mentor program,” she said. “We developed the idea, branded the concept, solicited community partners and organized a launch party in less than a year. Fortunately, it was well received and successful, even though I was impetuous. We made some rookie mistakes that took years to correct.”

One of those mistakes was getting a web address with a dot-com domain instead of a dot-org address – and launching before the Royalty Project was officially recognized as a 501(c)(3).

“All is well now, though,” she said. “Mistakes were corrected, and lessons were learned.”

“The name was chosen to convey ascension,” Jackson said. “The painful history of African-Americans has produced a large amount of self-doubt in our community. Considering ourselves royalty conveys that we are called to a higher standard.”

The Royalty Project is an eight-week program offered twice a year, in the spring and fall. Students participate in Saturday workshops that include activities and discussions about the history and culture of African descendants. They also go on a group field trip before the class culminates with a graduation , which is dubbed “The Crowning.”

It’s an important, if subtle life lesson – just one of many that Jackson and her volunteers hope to convey.

“Self-awareness leading to self-esteem, grounded in the substance of legacy – that’s the special sauce,” she said. “We work to share and embody the beauty that comes from a painful past by telling our own history. So often, our history and culture are depicted and narrated by people or groups who aren’t a part of it. It’s important that we narrate our own stories.”