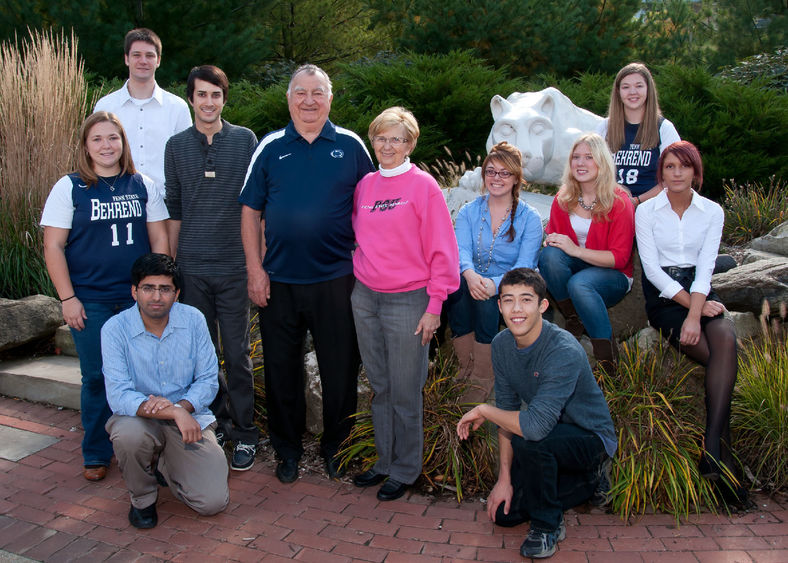 Joe and Isabel Prischak meet with recipients of the scholarships they have endowed at Penn State Behrend. The awards are given to graduates of Conneaut Valley High School and to the children and grandchildren of employees of the Plastek Group.

ERIE, Pa. — Erie businessman Joe Prischak, a longtime friend of Penn State Behrend and a community leader who was instrumental in founding the college’s plastics engineering technology program, has been named to the Plastics Hall of Fame. An induction ceremony has been scheduled for May 16.

Membership in the Hall of Fame is the highest honor the Plastics Industry Association bestows upon an individual. New members are added every three years.

“Joe Prischak is a pioneer and a visionary who understood from the start how plastics would revolutionize the design and packaging of products we use every day,” Behrend Chancellor Ralph Ford said. “His legacy in the plastics industry, the Erie community and at Penn State Behrend will last for generations.”

That legacy includes the plastics engineering technology program at Behrend, which has produced more than 1,000 graduates since Prischak and Paul “Hoop” Roche, the president of what was then Erie Plastics, approached the leadership of the college, hoping to expand the pipeline of professionals they needed to advance the plastics industry.

Prischak’s career in plastics began in 1949, when, at age 18, he was hired at Erie Resistor, which had produced radios and radar systems for the U.S. war effort. The company owned the second injection-molding machine in the United States.

A second job at Penn Erie Tool Shop positioned Prischak to launch his own business, the Triangle Tool Company, in 1956. Toolmaking led him back to mold-and-press work and a contract to build parts for Marx Toys, which at the time manufactured more than one-third of all the toys sold in the United States.

His next company, Plastek, adapted the mold-making process to the emerging field of plastics. Prischak made components for IBM computers and the Schick safety razor.

Today, the Plastek Group manufactures packaging for the personal-care, food and beverage, cosmetic and pharmaceutical industries. The company, which is still based in Erie, has more than 2,500 employees at manufacturing sites in the United States, the United Kingdom, Mexico and Brazil.

As the business grew, Prischak needed more professionally educated engineers. In 1984, he and Roche led a $6 million fundraising campaign, which benefited the plastics engineering technology program — one of only four accredited plastics engineering degrees in the United States — while expanding the facilities at Behrend.

The Prischak Building at Behrend is named in his honor.

“Joe Prischak had the vision and insight to position his company at the leading edge of plastics manufacturing,” said Tim Kurzweg, director of the School of Engineering at Behrend. “He also knew that to remain there, he would need well-educated, forward-thinking employees. His support of Penn State Behrend has transformed not only the college, but also the manufacturing community in Erie. The impact of that is immeasurable.”

The success of the Behrend program led Prischak to launch a second, nearly identical academic program at the University of Bratislava, in the Slovak Republic.

The Hall of Fame nomination also highlighted Prischak’s work with Africa 6000 International, which installs deep-well water systems in communities across eastern Africa. Prischak founded the non-profit after a visit to Africa in 2006, when he learned that nearly 6,000 children were dying every day on the continent because they did not have access to clean drinking water.

The organization has since completed 85 community wells. In January, building on a $1.4 million investment, it began 31 new projects, including wells in Kenya, Ethiopia and Tanzania.

At Plastek, meanwhile, a third generation of the Prischak family continues to innovate: The company is a major investor in the International Recycling Group, which hopes to locate a $100 million plastics recycling facility in Erie. The facility, which was announced in 2020, would sort more than 275,000 tons of material every year, significantly reducing the carbon footprint of the plastics industry.