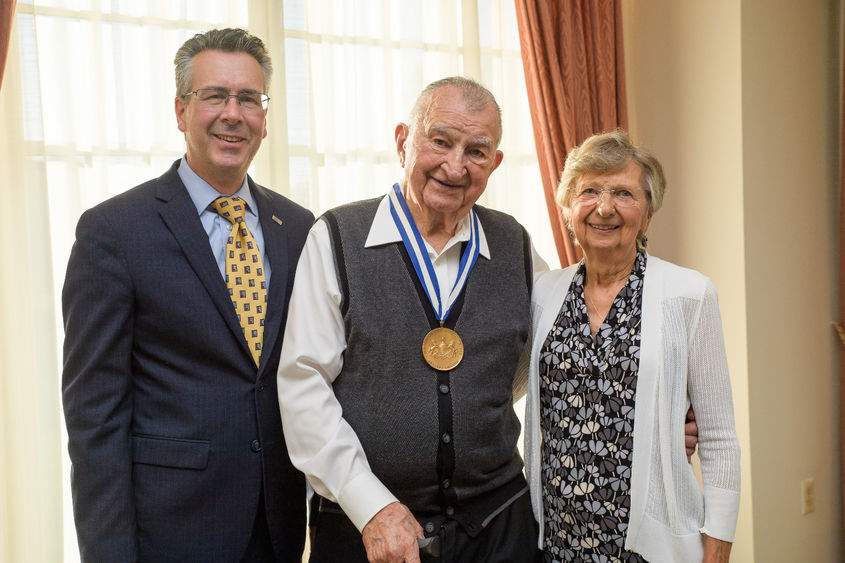 The Behrend Medallion is given to individuals who, by their service to society, have brought honor to their profession, their community, and themselves.

“The Prischaks are longtime friends of Penn State Behrend and leaders of the Erie community,” Behrend Chancellor Ralph Ford said. “They bring entrepreneurial thinking not only to their business, but to their philanthropy as well — using their generosity to advance opportunities that improve lives.”

Joe Prischak, who grew up on a Crawford County dairy farm, launched his own toolmaking business, Triangle Tool Company, while in his 20s. He later joined the emerging field of plastics with a new company, Plastek. Today, the Plastek Group is a worldwide manufacturer with more than 2,500 employees and production facilities in four countries.

In the 1980s, Prischak — recognizing the need for professionally educated engineers in his industry — was instrumental in creating the Plastics Engineering Technology program at Penn State Behrend. The program, which continues to be a popular major for Behrend students, is just one of four nationwide to be accredited by the Engineering Technology Accreditation Commission of ABET. It has produced nearly 1,100 graduates.

The Prischaks supported the creation of a Plastics Technology Development Center and the Engineering Complex at Behrend; the Prischak Building on campus, now part of the Science Complex, stands as evidence of their commitment to the college and its students. In more recent years, the Prischaks made a $1 million gift to Behrend to create the Joseph and Isabel Prischak Trustee Scholarship, which gives preference to students from Crawford County and Conneaut Area Senior High School, as well as a second $1 million gift to create the Prischak Family Trustee Scholarship, benefiting children and grandchildren of Plastek Group employees.

“Joe and Isabel have forged a deep legacy here at Behrend,” Ford said. “It is an honor to advance their vision of educating students, furthering plastics research, and endeavoring, always, to make a difference in our community.”

The Prischaks’ philanthropy has extended to other continents as well. In 2007, they created Africa 6000 International, a nonprofit organization that works to provide clean, fresh water in Africa. To date, Africa 6000 has more than 100 deep-water wells either operating or in the process of being drilled in Kenya, Tanzania and Ethiopia.

This marks just the 21st time the Behrend Medallion has been awarded in the college’s 73-year history. The most recent recipient was Thomas B. Hagen, chairman of the board of Erie Indemnity Company and chairman of Custom Group Industries, who was honored in 2018.