The award recognizes excellence in teaching and student support among tenured faculty who have been employed full time for at least five years with undergraduate teaching as a major portion of their duties. Milton S. Eisenhower, brother of former U.S. President Dwight D. Eisenhower, served as president of Penn State from 1950 to 1956.

When he first began teaching, Brown said, he relied on dated approaches where students learned solely from his instruction. But for the past decade he’s been on a journey of discovery, reflection and self improvement. Taking a student-centered approach, he’s focused on how students learn. 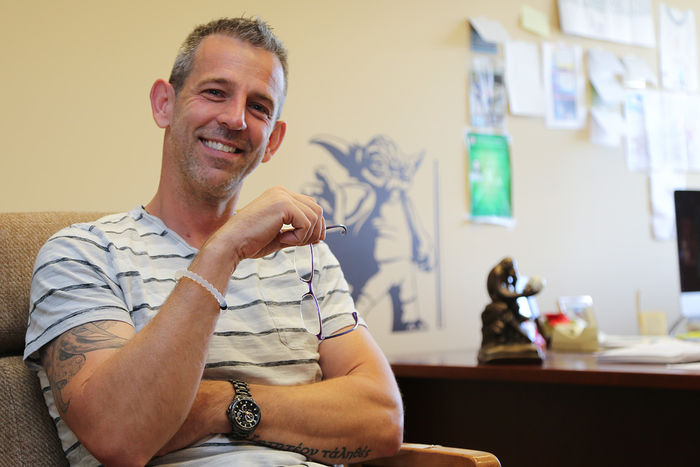 It’s radically transformed his classroom. Students spent half their time working in groups where students conquer bite-sized chunks of larger concepts and techniques.

“These forms of active- and inquiry-based learning are known to improve student learning,” Brown said. “They also facilitate student collaboration, which is particularly important for the success of marginalized students.”

He said it allows students to sharpen skills that are applicable beyond mathematics while fostering a sense of community among students. That’s a pillar of Penn State’s Millennium Scholars Program, which was modeled after the Meyerhoff Program, and is known to increase long-term retention among underrepresented students in STEM fields.

Nominators said Brown is dedicated to students achieving their full potential and to dismantling institutional barriers that hinder students from underrepresented groups. They said he refuses to believe there are students who inherently excel at math. Under the right instruction, he believes all students can succeed. That’s evident in the time he spends during the summer supporting students in Penn State’s Millennium Scholars Program, which is dedicated to improving diversity in STEM fields by putting underrepresented students on a path to a Ph.D.

In addition to working to create a more inclusive and equitable learning environment in his own classroom, he reaches out to other members of his department to discuss impediments to student success, such as stereotype threat.

Nominators said Brown is himself a lifelong learner who is always looking for ways to improve.

“I believe that Nate stands out above and beyond all other good teachers because he is consistently and actively striving to learn how to teach today’s students,” a nominator said. “He reads research articles on education and educational psychology and incorporates these evidence-based findings into his instructional plan. He listens to students. As a result, he can confront his own biases and change his methods based on new information.”

Students praised Brown’s ability to treat them as individuals, knowing the tools each of them need to succeed in mathematics. They said he’s an empathetic educator who hasn’t forgotten what it’s like to be a student. They said he gives them the motivation they need to succeed and considers their failures his own.

“In Nate’s class, it doesn’t matter how large the gap is between where your past experiences with mathematics have left you and where you would like to be,” a former student said. “He has made it clear he will eagerly go out of his way to breach the divide.”

Nagle said too often students learn math via a set of disconnected formulas, rules and procedures void of underlying concepts, so she strives to build the development of understanding so students can instead view themselves as capable thinkers. Because she’s teaching the next generation of math teachers, she wants to motivate and equip her students to do the same in their classrooms. 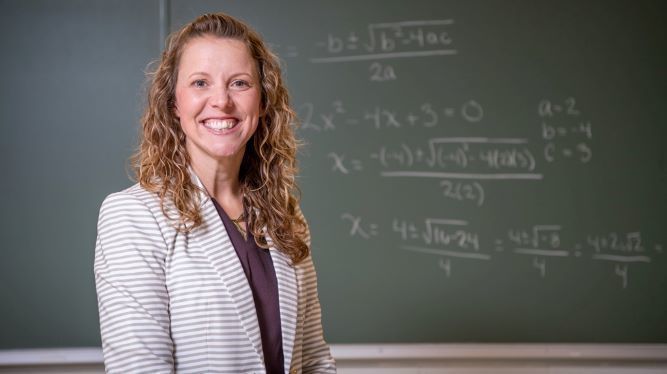 “My role as the teacher is to facilitate experiences that allow students to make these constructions,” Nagle said. “To make this happen, I focus on building a risk-free classroom, establishing learning objectives to guide teaching and learning, providing daily formative feedback, and engaging students in self-assessment and reflection.”

One way she accomplishes this is by prompting students during the first week of class to write short messages to her. She gives handwritten responses in this exercise that quickly shows students she’s interested in their thoughts and builds a two-way dialog.

Nagle said it’s critical to establish clear learning objectives. It begins with building students’ conceptual knowledge so that these foundational skills can be leveraged when students are tasked with more difficult concepts that require them to think and reason in new ways.

She also offers daily formative feedback so students know that mistakes are part of the learning process.

Nominators said Nagle builds a relationship with her students that encourages them to be active in the learning process. They praised her formative assessments such as her daily learning log, which requires students to complete one problem closely linked to the daily lesson’s learning objective. Nagle gives written feedback and assigns a completion score before the next day. This gives Nagle immediate feedback on how successful she conveyed the message and gives students feedback on how well they understood the concepts.

“Equity and inclusion are the cornerstones of Nagle’s teaching philosophy and transcend across the various courses she teaches,” a nominator said. “She believes that all students are capable of learning provided they are willing to invest time into practice and reflection. She infuses growth mindset into her classes, reframing mistakes as opportunities to learn and incorporating a reflection to promote self-monitoring of learning.”

“I first had Dr. Nagle my freshman year for my Calculus 140 class, but my relationship with her continued on even after my semester with her,” a former student said. “She is an amazing professor who did not let anything get in the way of teaching and engagement with her students; even in the mists of a global pandemic Dr. Nagle always found ways to make those crucial connections with her students.”