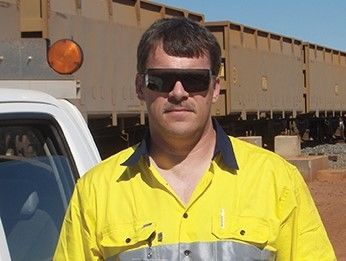 A back injury forced Warren Fargo from his job as a railway engineer. Degrees from Penn State Behrend and Penn State Wilkes-Barre put him back in the railyard, as a senior field service specialist for New York Air Brake Corporation.

ERIE, Pa. — As a railway engineer in Buffalo, New York, Warren Fargo once worked 93 consecutive days. He was on-call 24/7, including holidays and weekends, for 16 years.

That stopped when a back injury ended Fargo's career. He underwent surgery, which was successful, but his ability to lift things was still limited.

He started researching trade schools. Then a niece was accepted at Penn State Behrend, and Fargo did some reading about the college’s associate degree in electrical engineering technology (EET). It seemed like a good fit.

Fargo enrolled in the fall of 2002, just 24 hours after leaving his job with the railroad. He carried his work ethic into the classroom.

“Over the next three years, I believe I spent every single day, seven days a week, at school,” Fargo said.

He graduated in 2005 with two associate degrees from Penn State: An EET degree from Behrend and another in telecommunications engineering technology, from Penn State Wilkes-Barre.

Fargo soon found himself back in a railyard.

Today, Fargo is a senior field service specialist with New York Air Brake (NYAB) Corporation. He troubleshoots and resolves air brake issues. He travels all over the world but spends many of his work days at Wabtec, in Erie.

“I receive trouble calls from all over the world and have traveled all over the United States and Canada, and to South Africa and Australia,” Fargo said. “I get to meet and work with a broad range of people, and it’s a good feeling to know that I can often resolve issues for someone halfway around the world.”

The work also provides a tangible sense of pride.

“When I see a train, I know there’s a good chance the products that I support are on those railcars or on that locomotive,” Fargo said. “I really enjoy what I do, and I’m glad that I decided to go to college, and that I stuck with it.”