All in the (Swim) Family 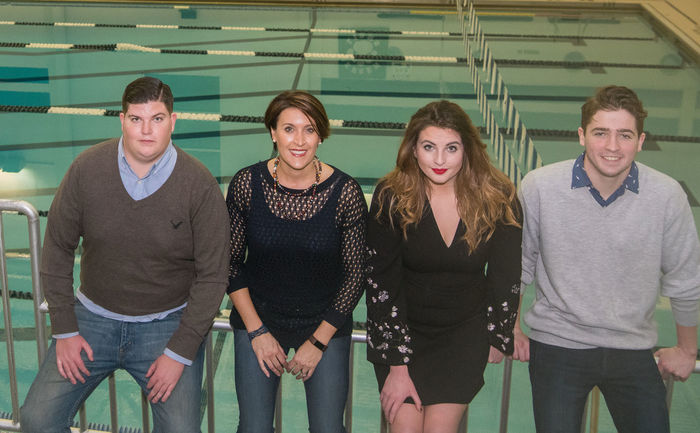 For ten years, Penn State Behrend swimming and diving head coach Jennifer Wallace has had a Watterson on her roster.

Terrance “T.C.,” a 2012 graduate, was the first. A year later came his sister, Anna ’17. Last fall, Wallace welcomed to the Junker Center pool the latest—and last—Watterson sibling, Liam, who is majoring in Mechanical Engineering.

The Pittsburgh siblings didn’t plan to attend the same college, but each of them said Behrend felt like home, complete with a “swim mom and dad” in Wallace and her assistant coach, Joe Tristan.

“While T.C. was in college, our mother suffered a massive stroke and Coach Wallace really cared about our family,” said Anna Watterson ’17, who graduated with a degree in Communication. “After seeing the love and support Coach Wallace offered, I couldn’t imagine going to any other college. Coaches like Jen and Joe impact your life, not just your swim strokes.”

Fortunately, the Wattersons’ real swim mom, Alexis, survived and is doing well today. She was on hand for Anna’s graduation in December as was Anna’s father, David, her brothers, and Coach Wallace.

“I was happy, but surprised that Anna chose Behrend because I figured she would go somewhere far away and much warmer,” said T.C., who graduated with a degree in Mechanical Engineering and currently works at FirstEnergy in Cleveland as a nuclear design engineer. “As for Liam, he looked at a ton of schools and was accepted at most of them, but as soon as he got home from the visit to Behrend, it was obvious he’d fallen in love with the swim team and the School of Engineering.”

With four years between each of them, T.C., 26, Anna, 22, and Liam, 18, were never in the Junker pool together, but they shared plenty of water when they were younger.

Chlorine runs through this family’s veins.

From the age of 5, all three Wattersons were members of the Baldwin-Whitehall Swim Club, a Pittsburgh-area youth team that was then coached by their father. David Watterson was a standout high school and collegiate swimmer and he has never stopped competing. He currently swims on a Pittsburgh masters team.

Sibling rivalry has a silver lining

“Swimming definitely helped us build a bond,” Liam said of his relationship with his siblings. “Having a good kind of competition among us helped bring us together.”

Although the trio went to different high schools, they all excelled in the pool.

T.C. qualified for the western Pennsylvania finals four times at Brentwood High School and was a team captain and Allegheny Mountain Collegiate Conference (AMCC) record holder in the mile at Behrend.

Anna was on section-winning teams at Seton-LaSalle High School and was also team captain at Behrend where she won six individual event titles and helped the Lions capture the AMCC championship three times.

Liam set a school record in the 200-yard individual medley in his senior year at Baldwin High School. He’s already set his sights on smashing a few records at Behrend.

Coach Wallace agreed. “He is just getting started and has already had some big time drops. With his drive and lots of hard work, Liam certainly has the potential to get his name up there,” she said, nodding to the record board hanging in the natatorium.

Liam and Anna were on campus together for one semester, just enough for Anna to show him the ropes.

“I’ve never been more appreciative of having a sister than I was during my first months at Behrend,” Liam said. “She helped me with a ton of stuff, as has T.C., even though he’s not here on campus.”

And he has the rest of his swim team for support.

“They already feel like family to me,” Liam said.

Behrend Magazine: What was your favorite stroke or event?

T.C.: Backstroke, because I could breathe for the whole race, but I never had the turnover to be competitive in it. My main event was the 1650 (mile swim).
Anna: I love all the strokes, but freestyle takes the cake. My events were the long-distance frees, so the 500, 1650, and the 400 IM.
Liam: Backstroke. My favorite events are the 100 back, 200 back and the 50 free.

T.C.: Butterfly. It’s hard to do well and, in practice, you always end up whacking your arm on the land rope or a teammate.
Anna: Individual medley days, when we train on all the strokes. There’s so much flipping from back to tummy that I swear I got motion sickness from it.
Liam: Butterfly, which is unfortunate

Inflatable fun in the pool

Obstacle races are all the rage today, but Penn State Behrend Athletics took it one step further, hosting an inflatable obstacle course race in the pool. The event—called SwimJitsu— was open to swimmers of all ages and drew more than 100 people to a two-hour session of swimming/sliding/ jumping fun at Junker Pool. The event was a fundraiser for the swimming and diving team, members of which were on hand to partner up with any small children who needed a race buddy.