Good News in the Latest Rankings

New rankings by PayScale Inc., a data company that tracks employee salaries, place Penn State Behrend among the top ten of all Pennsylvania colleges and universities for return on investment.

PayScale assesses a school’s return by measuring the total cost of attendance against the employability and median salary of its graduates. Penn State Behrend graduates earn, on average, $405,000 more than a typical high school graduate over twenty years of employment, according to PayScale.

“More than ever, families are paying attention to the cost of attending college,” Chancellor Ralph Ford said. “They expect a return on that investment. Our high ranking in terms of ROI is evidence that a Penn State degree positions our graduates for success by providing a financial boost throughout their careers.”

That success begins with the college’s academic programs, which also have been lauded in recent national rankings. U.S. News & World Report placed the School of Engineering among the top thirty undergraduate programs in the nation. U.S. News also lists the Black School of Business as a “Best College” for undergraduate business programs, and The Princeton Review includes the School of Business in its list of the nation’s top MBA programs.

It is the only accredited Computer Science program at Penn State, but one of many accredited programs at Behrend: All of the academic programs in the School of Engineering are now accredited by ABET, which monitors programs at more than 750 colleges and universities in thirty countries.

Trippe Hall will be the freshest address at Penn State Behrend when the building opens for the fall 2018 semester. Students of all majors and class standings will have the opportunity to live in a brand-new, $28.4 million residence with the latest living-learning amenities.

A portion of Trippe Hall will offer an international-focused environment intended to help students build valuable skills in cultural competency. This community, called Global Boarders, will be a mix of international and domestic students who want a culturally diverse learning experience. Special academic enrichment and out-of-class experiences will be part of Global Boarders.

Tree House is another special living option that will be available in Trippe Hall. This area will be for students who want to lead lives of heightened environmental consciousness. Tree House residents will engage the Behrend community on sustainability topics, encouraging others to consider the environmental impacts of their daily choices.

Construction is complete on the expansion of the Burke Center parking ramp. Two and a one-half levels were added to the existing ramp, providing an additional 203 parking spaces. Some of the spaces will be reserved for commuter student parking.

Adding levels to the ramp is an environmentally-friendly choice, as the college was able to meet the needs of commuter students without creating additional surface lots, which are impermeable to rainwater. 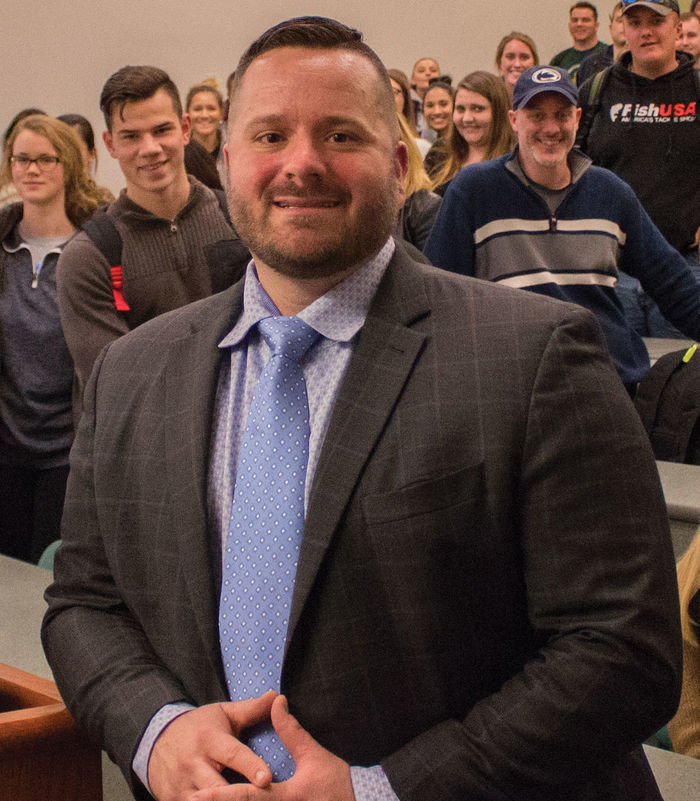 Who better to introduce students to some of the realities of the business world than a successful industry insider? That’s why the Black School of Business has created an Executive in Residence program, inviting professionals to share their experience and insights with students and faculty members.

Bloyd will bring business and industry perspectives to classrooms, research projects, and hands-on learning opportunities. While the Black School routinely hosts a range of business practitioners, Bloyd will maintain a long-term relationship with the school.

“I am very excited about helping the school develop this program,” said Bloyd, who earned a degree in History at Penn State Behrend before entering the corporate world as an account manager at Leggett & Platt. “I’m looking forward to returning to campus and working with current students, sharing my successes and failures in business. It’s an honor to be named the first Executive in Residence with the Black School of Business.”

A second professional recently came on board, too: Marc Nachman, president of Sprint for the Ohio, Pennsylvania, and West Virginia region, will also serve as an Executive in Residence at the Black School.

Midnight Bingo, sponsored by the Penn State Behrend Lion Ambassadors, is one of the college’s most popular student traditions. The event, which started more than fifteen years ago, is a favorite of Behrend students, who fill McGarvey Commons in hope of filling their bingo cards and taking home prizes that range from food and coffeemakers to flat-screen TVs and Xbox gaming systems.

Penn State Behrend lost a longtime supporter of the college when respected business and community leader Howard C. Lincoln, 79, died in October. He was the former president and CEO of Lincoln Recycling, a company now led by his children.

Lincoln and his wife, Mary, devoted substantial energy and resources to support a wide range of civic, cultural, educational, and health care organizations and initiatives. In 2007, he was instrumental in the creation of the Young People’s Chorus of Erie, an outreach program of the college’s School of Humanities and Social Sciences; he and Mary remained supporters of the chorus.

Lincoln was a 1961 graduate of Penn State's College of Health and Human Development. For the past ten years, he served as a member of Behrend’s Council of Fellows. In 2008, he and his wife created a scholarship for Behrend students; since the establishment of the Mary Swed Lincoln and Howard C. Lincoln Trustee Scholarship, more than 100 students have received financial aid, support that now totals nearly $200,000. 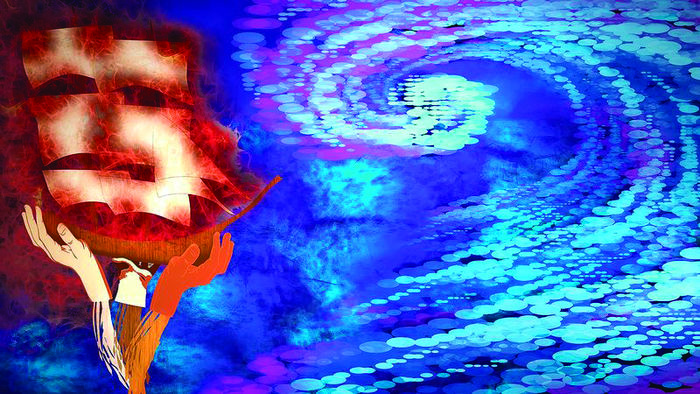 A painting that moves

Behrend art instructor shows what tech can do

Remember in “Scooby-Doo,” when the paintings had eyes that moved, following Scooby through the room?

Heather Cole has made something cooler. She created a fabric painting, “Don’t Give up the Ship,” with an image of the U.S. Brig Niagara, the flagship from the Battle of Lake Erie, at the left edge. She embedded it with computer code, which adds an element of augmented reality: Using the Blippar app, viewers can make the ship move.

Erie Arts and Culture and TEDxErie commissioned the work, which was used as the backdrop for a TEDx program in Erie. Cole left space at the center of the 20-foot fabric, where the TEDx speakers stood. To the left, she painted the Niagara, its sails afire, its hull held up by three hands. On the right she added a digital swirl, a rising wave patterned with Photoshop, Illustrator, and Black Ink software.

She developed the first draft over two weekends. It took four more weeks to embed and test the augmented reality. Using the Blippar app on a phone or tablet, viewers see the Niagara move to the right, its sails pocked with digital fire. Then it rises, lifted by the wave.

“In my artwork, each of us is the ship,” Cole said in her TEDxErie talk. “We will have our trials, and our sails may feel like they are on fire, and the tide may try to smack us down, but as long as we have each other to help raise us up, we will weather any storm together.”

When the event ended, Cole saw another opportunity to use the piece. She and Erie Arts and Culture gifted it to the School of Humanities and Social Sciences, which hung it in the upper floor of Kochel Center. 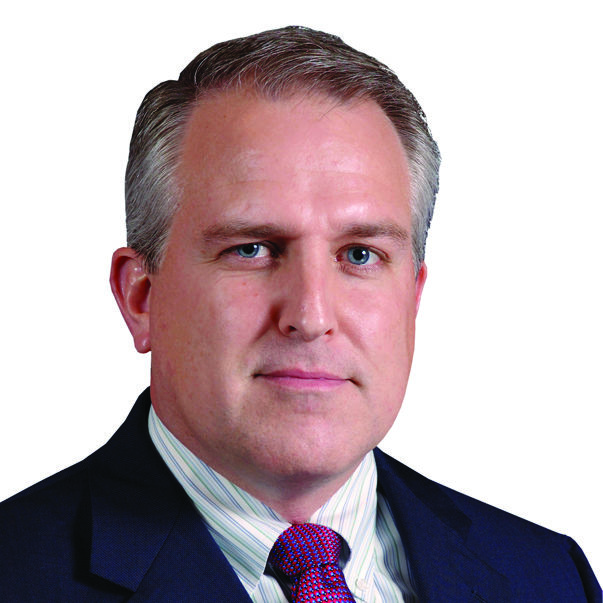 Kupchella is president, CEO, and chairman of Truck-Lite, a market leader in truck and trailer safety lighting that has introduced more than 250 innovations to the transportation industry. He began his career with Truck-Lite in 1990 and was responsible for its transition from automotive to commercial vehicle lighting products. He has held a variety of positions within the company, including manager of product engineering, chief operating officer, and vice president of business development with responsibility for effective market and product analysis and direction of all internal resources to support new business opportunities. Kupchella led Truck-Lite’s development of LED technology, including the first full LED headlamp system in the transportation industry.

A record number of companies–175–and students–1,300–participated in the college’s 2017 Fall Career and Internship Fair. The event, which was organized by the Academic and Career Planning Center, was held in September in Junker Center.

While students work to craft and perfect their pitches, the same can be said of the visiting companies and organizations. Hyland, for instance, focuses on promoting work-life balance to potential employees. It’s a selling point for the company, which attended the fair to hire for positions in software development, quality assurance, and software consulting.

On its campus, Hyland has slides that can be used in place of stairs or elevators. It also offers volleyball courts, a spacious outdoor walking trail, and an arcade complete with old-school machines and an Xbox. Each day, employees receive two twenty-minute breaks, as well as a half-hour lunch break.

“We want our employees to not only pursue their professional goals but also their personal goals as well,” said Courtney Byham, a recruiter from Hyland, which expects to hire individuals to fill more than 300 positions this year. “Yes, we want you to succeed here, but we also want you to make sure that your main focus is your life and family.”

For students, especially those seeking a flexible work environment, this can be a major selling point.

“Oh, absolutely, I love the companies that have cool stuff like that,” said Courtney Ironside, a senior Marketing major from State College who attended the fair in search of a full-time position. “I have to be at work for so long each day, so I want to enjoy my time while I’m there. Anything out of the ordinary is what I’m looking for today.”

“At the end of the day, (a company) should be about its workers and their happiness because that’s what is ultimately going to help their performance,” said Stetz, who was also seeking a full-time position.

According to Courtney Steding, director of career services at the college, the approach used by Hyland is the start of a larger trend. “Job seekers today are looking for more than just a paycheck,” Steding said. “Students are seeking out companies that provide growth and mobility, engaging teamwork, and opportunities to give back to society, all while having fun. Employers are responding by creating branding strategies and out-of-the-box ideas in order to recruit a diverse and talented pool of candidates.” 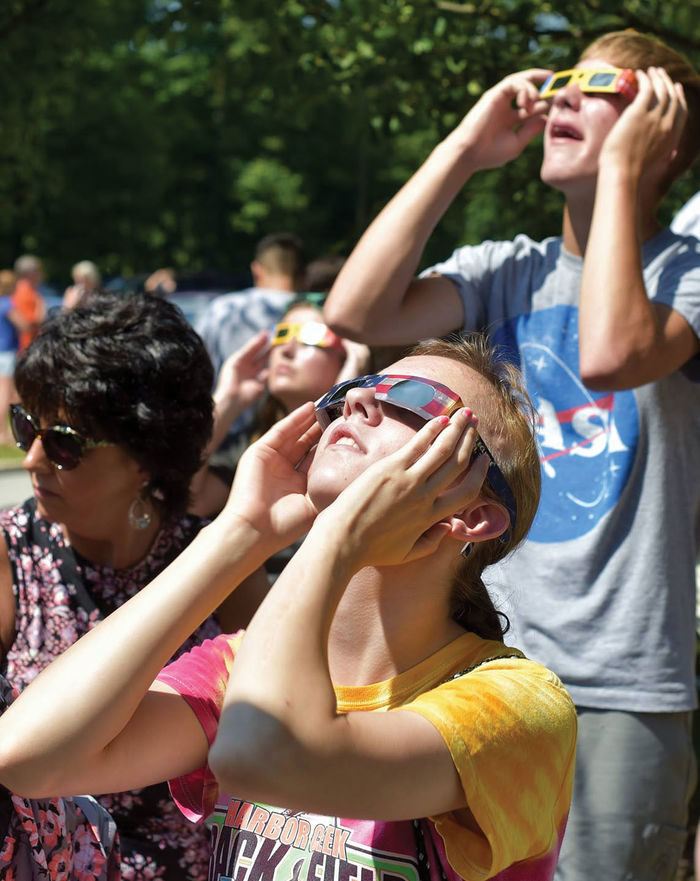 All eyes were on the sun on August 21, when the Great American Eclipse passed over Penn State Behrend. While it was only a partial eclipse in the Erie area, it was still a major astronomical event and the college’s School of Science invited the community to join in viewing it.

Hundreds of students of all ages, as well as faculty, staff, and community members, peered through telescopes, cardboard solar eclipse glasses, and paper-and-tinfoil pinhole viewers to see the moon steal the sun’s spotlight.

And observers will get an even better look on April 8, 2024, when Erie will be in the path of totality of the next solar eclipse, leaving the area in complete darkness for a brief period.

P.S. Alumni: Might be a great time to plan a homecoming to your alma mater!