Note: This article is from spring 2018. As of fall 2018, The Clipper no longer serves Penn State Behrend. 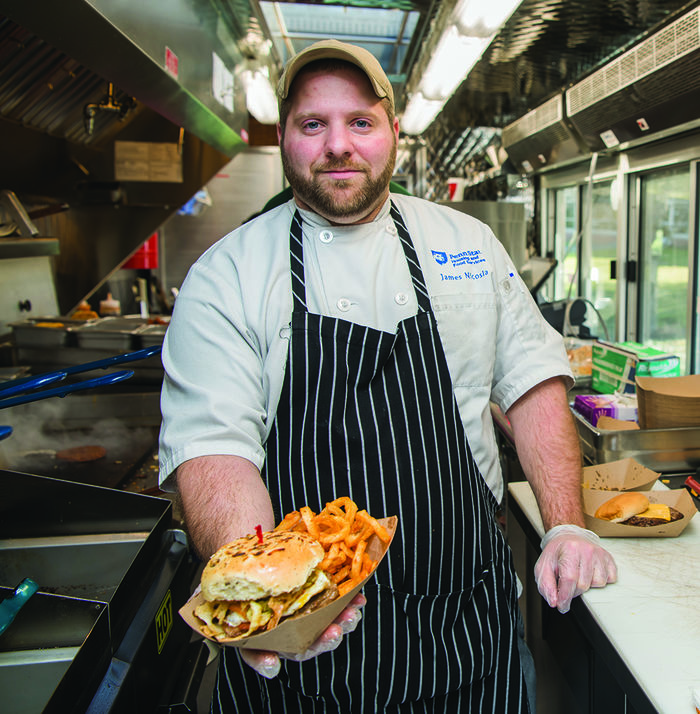 Every business owner knows that the best way to keep your customers is to listen to them.

“We try to have lunch with members of the Student Government Association once a month to get opinions and ideas for improvement,” said Michael Lindner, director, Housing and Food Services at Penn State Behrend. “A couple of years ago, they suggested we bring a food truck to campus.”

Lindner loved the idea and thought a food truck could help fill gaps in food service operation hours and locations on campus. Unfortunately, he couldn’t get an Erie-area food truck to commit to campus.

“None of them wanted to be tied down to a regular schedule at one location,” Lindner said. “It’s the nature of that business to be transient.”

So Lindner suggested that Housing and Food Services do it themselves.

“I turned in a proposal to build a food truck and got the green light to look into it,” he said. “Then we spent the next year learning all about food trucks and the food truck business. We talked to other universities to find out what they liked or didn’t like about their trucks, and explored menus and manufacturers.”

With plans and a budget in place last spring, Lindner and his team began working with a manufacturer on a custom-designed truck with a fullservice kitchen and Behrend-centric paint job.

Dubbed “The Clipper” in keeping with Penn State Behrend’s tradition of naming food and housing facilities after people and ships connected to the Battle of Lake Erie, the thirty-onefoot Freightliner set sail on its maiden voyage to Hammermill Building on the first day of the fall semester.

Students were soon lining up between classes to nosh on Anchor Burgers, curly fries, tacos, chicken and waffle sandwiches, and more. The Clipper offers lunch and late-night studybreak food, including Starbucks cold brew, at four rotating locations on campus.

Lindner said that, after operating the truck for several months, they learned a few things.

“We knocked it out of the park with the menu,” he said. “We have five standard menu items and six other menu items we rotate through that are not served elsewhere on campus. I also think we got the pricing right because we’re attracting commuter students, who don’t normally eat on campus.”

Location and logistics required some tweaking.

“We thought we’d park the truck in a central location and students would walk to it, but they didn’t really do that,” Lindner said. “We found that we have to park it in front of a busy building.”

During the day, the Clipper can be found near the Hammermill Building, Burke Center, or Reed Union Building. Late nights, it docks outside of Ohio, Niagara, or Perry residence halls.

“The 8:30 to 11:45 p.m. hours near residence halls have been extremely successful,” Lindner said. “But, overall, the truck has been popular. It’s really filling a void and also helping to relieve traffic during busy times at Clark Café and Bruno’s.” 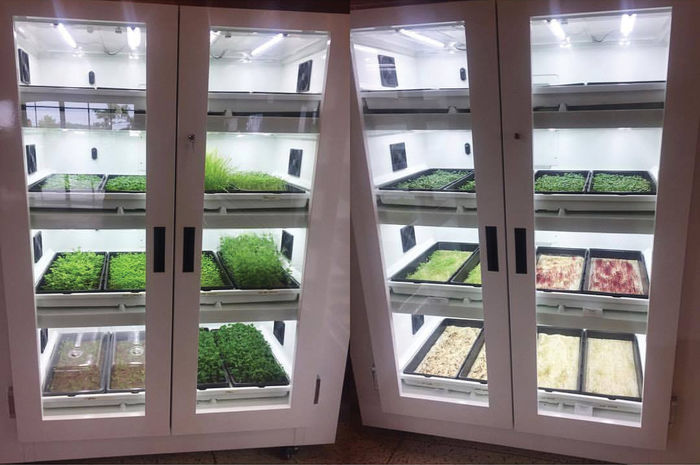 Plants started in the cultivator

The Clipper isn’t the only new idea you’ll find in campus dining at Behrend. A flurry of advances have been made in the last decade, many at the request of students.

“Students today are conscious consumers,” Lindner said. “They want to see us making environmentally friendly decisions, and we are.”

Lindner and his team have worked closely with students in Greener Behrend, the college’s sustainability group led by director Ann Quinn, to reduce waste and donate or compost leftovers. They also are beginning to grow some of their own ingredients.

There are eight raised garden beds behind Dobbins, and staff recently added a small greenhouse. Lindner said they are working with students in the Agriculture Club and Greener Behrend to determine what to plant

“We want to plant with purpose,” he said. “What can we grow enough of to make an impact?”

The plants will be started in Food Services’ newest acquisition: an Urban Cultivator. The Urban Cultivator looks like a double-wide soda display case but contains adjustable shelves, grow lights, and humidity and temperature controls that allow staff to grow and cook with fresh greens, herbs, and other produce year-round.

“By starting our plants in the cultivator, we can harvest multiple times, which will increase our yields and allow us to grow some plants with a longer growing period that we haven’t planted in the past,” Lindner said.

Not all plants started in the cultivator will go in the ground. Many will go into recipes, dishes, and salads served to students.

“We recently harvested a crop of basil and what we didn’t use fresh, the chefs made into pesto and froze for future use,” Lindner said.

Other recent upgrades in campus dining at Behrend include new furniture and interior design for Bruno’s, mobile-device charging stations, and computer kiosks for placing food orders.

The Galley, Behrend’s on-campus mini market, was built in 2011 with funds from the Student Facility Fee. Lindner calls the store an unbelievable success, not just for campus dining, but for students as well.

“It’s a little-known fact, but Penn State Housing and Food Services actually rents the space for The Galley from the students and shares profits with them as well. That’s something they get to keep collecting on,” Lindner said.