Successful businesspeople never stop learning and taking in new information, not just in the workplace or in a classroom, but in the car or office where they often tune in to a business talk radio station. In Erie, that can be found at FM 107.1 or AM 1450—Penn State Behrend’s WP$E, the University’s only publicly broadcast radio station outside of University Park.

“Our tagline is ‘Money Radio,’ which really tells the story of what we are all about,” said Joe Martin, general manager of the station. 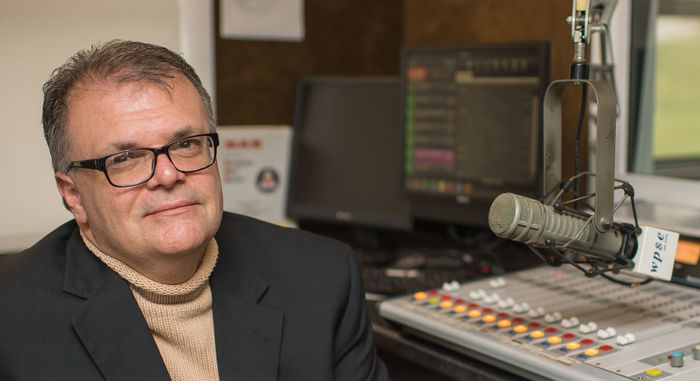 WP$E is the only business talk radio station in the Erie region and carries the top business/money-related syndicated programming in the nation, including Bloomberg Radio, The Clark Howard Show, and The Ray Lucia Show, as well as news at the top and bottom of every hour.

“We have CNN at the top of the hour and Fox News at the bottom of the hour,” Martin said. “That’s deliberate because we want to offer a range of perspectives in serving our listeners.”

Aside from business news and information, Martin said the station’s Partners for Business segments are the most popular feature on WP$E.

“Partners for Business are sixty-second interviews with business owners and leaders and entrepreneurs from Eriearea companies and industries,” Martin said. “The segments really set us apart in the market because of the way they are done; they are not advertisements, but more in-depth and informational interviews with industry professionals.”

“Business owners like to hear from other businesspeople,” Martin said. “They want to know what others’ challenges are, how they are handling them, and what has worked well for them. We’ve found a niche with this approach, and we fill it well.”

It’s a space that Martin and staff members of WP$E are happy to address and one that advertisers have been supporting for nearly thirty years since the station went on the air in 1989.

“Our listeners tend to be affluent, well-educated business professionals, which is a high-quality and attractive demographic to advertisers,” Martin said.

It’s not all business on WP$E: After work hours, the station airs all Penn State football games and some basketball games and hopes to soon start airing some Erie-area high school games.

The station also recently snagged a contract to carry all of the Pittsburgh Penguins games for the next three years! “We are really excited about it,” Martin said. “The Erie area is a sports hotbed and we’re exploring increasing that programming in the future.” Evenings and weekends only, of course, because at WP$E, business comes first.