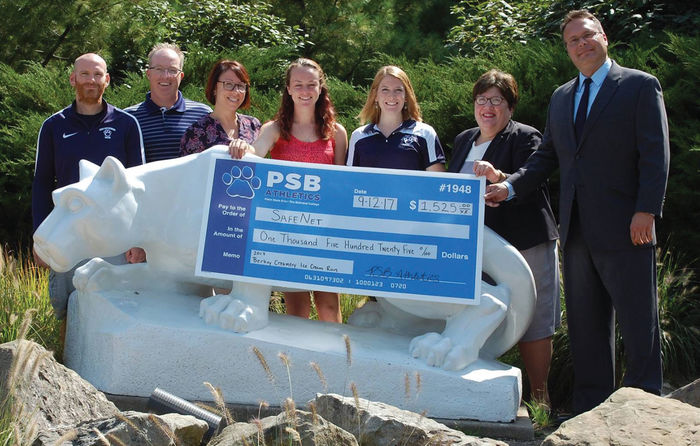 A little rain didn’t dampen the spirit of the Lion Ambassadors who posed for a “Happy Birthday, Behrend” photo in front of Glenhill Farmhouse on Founder’s Day, October 30. In 2017, Behrend turned 69. That means we have a big birthday this year!

Puzzling new fun in the library

Students in need of a study break have the perfect diversion in Lilley Library, where staff members have been putting out jigsaw puzzles for collective community fun. The puzzles have been a surprisingly popular addition. It’s rare to walk into the library and not find a couple of students searching for pieces that fit.

Did you know that Behrend has a sailing team? Last summer, the team competed in the IUP Messabout Regatta against teams from Indiana University of Pennsylvania and the University of Pittsburgh. Despite winds that eclipsed twenty miles per hour, the Behrend team finished in first place. They are, from left, Petar Dotchev, Noah Feister, Andrew Arndt, Pat Hagan, Caroline Mashyna, and Mike Dobransky. 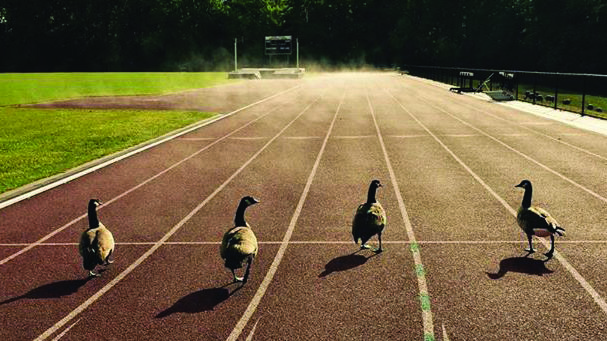 Harborcreek Township resident Karen Beebe captured a fabulous photo of four geese on the college’s outdoor track after a morning rain (above). We asked our Facebook friends to send us their wittiest captions. Here are a few of our favorites:

Margarita Dangel, a site director for the Sisters of St. Joseph Neighborhood Network, has 170 bicycles in the back of a small warehouse on Erie’s east side. She donates them to neighborhood kids, or to immigrants who move to Erie with help from the U.S. Committee for Refugees.

Before giving them out, Dangel oils chains and tightens brake cables. She pumps air into tires. She even shines the kickstands.

On Monday, Jan. 15 – the national MLK Jr. Day of Service – she had help: four students and a staff member from Penn State, which encourages its students to observe the Martin Luther King Jr. holiday by volunteering for service.

To increase their impact, the University’s western campuses – Behrend, Beaver, DuBois, Fayette, Greater Allegheny, New Kensington and Shenango – partner for service projects, saturating a community near one of the campuses with students who are willing to work. This year, 50 students came to Erie.