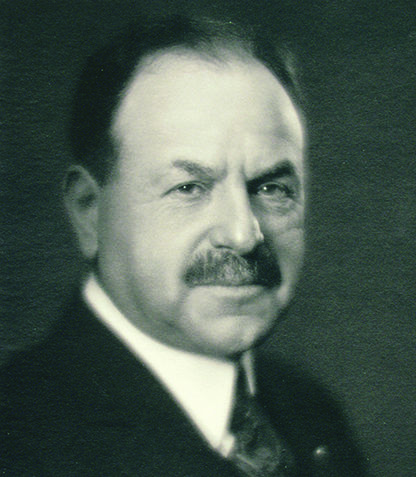 Ernst Behrend, who founded Hammermill Paper Company in Erie with his brother, Otto Behrend, was born in Coeslin, Germany.
Several years after his death, his wife, Mary Behrend, donated their Glenhill Farm for the establishment of Penn State Behrend.

Penn State Behrend’s German roots run deep. Ernst Behrend, the original owner of the property on which the college now sits, was of German descent. If he and his wife, Mary, who donated the property after his death, were here today, we feel certain they would be pleased to learn of the many links between the college and Ernst’s former homeland. Here are just a few examples of the viel (a German adjective meaning much, a lot, many) ties that bind Behrend and Germany.

Annalie Fitzgibbon, a senior Plastics Engineering Technology major, learned in early December that she would be spending her next semester in Germany. Fitzgibbon received a Gilman Scholarship, a competitive U.S. State Department grant, which is making her international experience possible.

Fitzgibbon, who is minoring in Operations and Supply Chain Management, leaves in early March, which is the start of the spring semester at Rosenheim University, and will be taking three business courses and an engineering course during her stay.

“I’m really excited about traveling to Europe where there are so many other countries within close proximity,” Fitzgibbon said. “I can take a train and be in a different country in a few hours. I look forward to embracing the culture.”

Fitzgibbon is the third Behrend student to study in Germany with Gilman Scholarship funds. Brandon Petras ’17, a Political Science graduate, and Dylan Langharst, a senior with dual majors in Physics and Math, each spent a summer in Berlin.

“I studied at the International Education of Students Institute in Berlin,” Langharst said. “During my sojourn, I was exposed to many different people with different viewpoints. It was eyeopening and I’m a better person for it.” 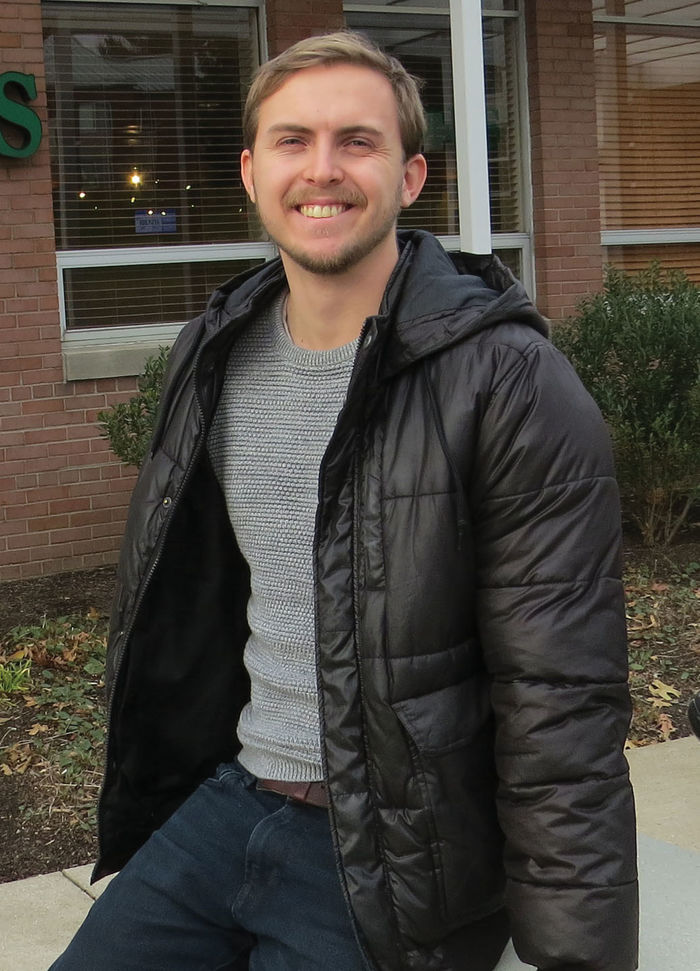 “I was born in South Africa and have traveled to six different continents, but I had never been to North America, so I was excited to attend Behrend,” Kunschert said. “It’s a beautiful campus with very well equipped engineering labs and great professors.”

Some differences he noticed while attending college in the U.S. include the workload (more homework here), the number and frequency of tests and quizzes (Germans have only one final), and the informality and chattiness of U.S. residents.

“People are much less formal here, especially with their professors,” he said.

“Also, small talk is not something that is done in Germany, but there is plenty of it here, which I really enjoyed.”

Kunschert’s time at Behrend came after Rosenheim had welcomed Behrend Mechanical Engineering major Jacklyn Niebauer, who studied in Germany in the spring of 2017.

“Right now, the student exchange with Rosenheim is a one-for-one program,” said Ruth Pflueger, Global Programs campus representative and director of the Learning Resource Center, which coordinates international experiences for students at Behrend, “so when Rosenheim hosted Jacklyn in the spring, Behrend welcomed Alois in the fall.” 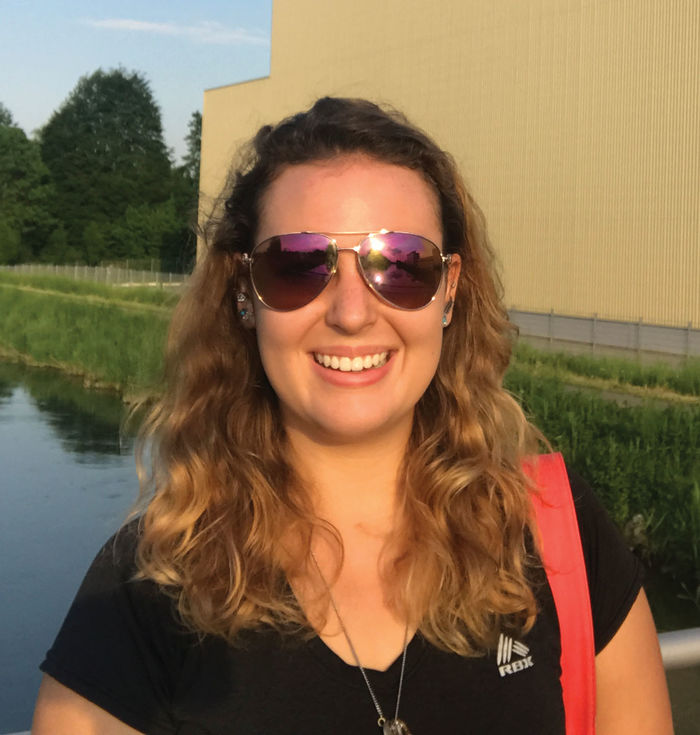 Aimee Ozarchuk, an Interdisciplinary Business with Engineering Studies and International Business major, called her experience as an intern at Krones in Rosenheim, Germany, last summer, the “best experience of my life, thus far.”

Many Behrend students do internships at German companies each year.

Last summer, Aimee Ozarchuk, a senior majoring in Interdisciplinary Business with Engineering Studies and International Business, had a paid internship at Krones, a manufacturing facility in Rosenheim.

“It was the best experience of my life thus far,” Ozarchuk said. “It helped me realize the career path that I want to pursue.”

She enjoyed her time living abroad as well. “Germany is beautiful and the food is delicious,” she said. “Bicycling is very popular and the cities are set up to accommodate it. The majority of people bike wherever they are going. I was surprised at how well companies treat their employees and accommodate their personal lives.”

The experience not only confirmed for Ozarchuk that she was on the right path, but boosted her confidence.

“Working abroad really challenges you in new ways,” she said. “It helped me realize my potential. After my internship, I am confident in my ability to excel in my future career and positive that I want to work for an international company.”

Ragai’s relationship with Rosenheim University began in 2015 when he served as a guest lecturer over Thanksgiving break. Since then, he has been teaching courses during Rosenheim’s spring/ summer semester.

Ragai, who earned his engineering degree in Munich, Germany, said he is excited to offer his Behrend students the same global experience he had.

“Germany is central in Europe and travel is very feasible,” he said. “Last year, I took my students to Croatia, Slovakia, and Austria. Teaching there is also fun and gives my students the opportunity to learn from and with students from a different culture. It creates an appreciation for diversity.”

The School of Humanities and Social Sciences has offered language and culture courses in Germany taught by a Behrend professor. The School of Science has sent faculty members to Germany, too. Dr. Anthony Foyle, associate professor of geology, taught SE&T 497 Environmental Issues in Eastern Europe, a study-abroad course that included lab exercises and field trips.

“It was a good experience for all involved,” Foyle said. “I was able to teach about conventional and sustainable energy topics, adverse environmental impacts associated with unregulated industrial development, and sustainability-driven recovery of the landscape, which happened after the Russians left. Meanwhile, students were immersed in a foreign culture and European architecture.”

“It’s an increasingly global business climate and students need to have insight into the culture and business practices of international partners,” said Jon Meckley, chair of the Plastics Engineering Technology program and associate professor of engineering. “There is much to be learned from seeing how others do it.”

Paul Lukasik ’15 was a standout student at Behrend, where he not only excelled in the classroom but also in leadership and service. It’s why the college named a major leadership award the Paul Lukasik Servant Leadership Award in his honor.

So it’s no surprise that the Project and Supply Chain Management alumnus is a standout in the corporate world. Following his graduation from Behrend, Lukasik accepted a position in GE Transportation’s Commercial Leadership Program, a two-year rotation that supports the development of talent in commercial operations, management, and sales.

For his final rotation this spring, Lukasik was given the opportunity to move to Frankfurt, Germany, where he is working as the project manager in the company’s Asset Performance Management team.

“My job is to lead the project team and manage the deployment of our products across the UK, France, Poland, and Germany,” Lukasik said. “Ultimately, the main goal of the project is to help our customers prevent locomotive failures by providing predictive analytics on their existing assets.”