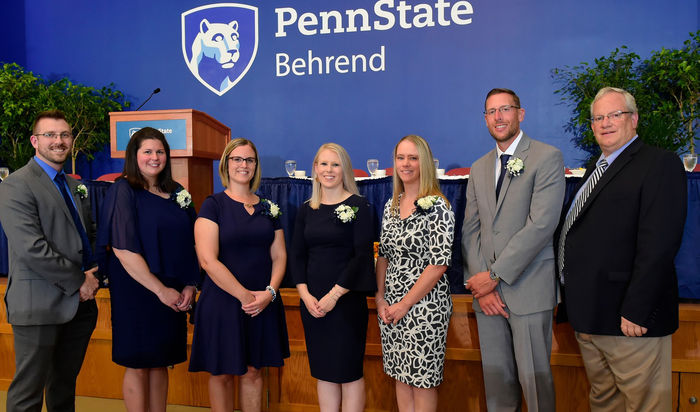 Alumni Inducted into Hall of Fame

He learned that more than fifty former players, team supporters, and friends had collectively given more than $41,000 to establish an athletic endowment in his name at Behrend.

“I was extremely humbled and grateful for the generosity of our alums and supporters,” Niland said. “It was something that I was totally surprised to receive, and the more I found out about it, the more emotional I got.”

“I started thinking about all the people who have been part of my time here, and it’s really touching that they did this in my name,” he said. “It means a lot, and I hope it helps our student-athletes for a very long time to come.”

Division III student-athletes like those at Behrend are not eligible for sports scholarships, so endowments are really the best way to support their athletic endeavors, said David Johnson, associate director of Development and Alumni Relations. Endowments can be directed to the athletic department in general or to a specific sports program.

“Because budgets for Division III sports are limited, most of the funds allocated to athletics programs have to be used to cover the basics like uniforms. They don’t cover expenses like travel, additional equipment needs, and the cost of food and accommodations on the road,” Johnson said. “So, for the teams to travel, they have to fundraise a good amount of that money themselves. Endowments help offset these costs.”

The largest athletic endowment at Behrend came in the form of a $2 million gift from Ted and Barbara Junker in 1997, but most involve much smaller amounts. While the minimum amount to establish an endowment is $25,000, there's no minimum on the number of people who can contribute, said Brian Streeter, senior director of Athletics, and supporters can also make ongoing contributions to established endowments.

In total, about 340 student-athletes compete for Behrend each year across twenty-four teams. The goal is to establish athletic endowments for every one of those teams.

“Endowments are a great way for former teammates and team supporters who love the sport and the school to give in a way that will impact generations of athletes,” Streeter said. “Our student-athletes play Division III sports, not for scholarship money, but because they love the experience of being on a team and competing together. By creating an endowment, you're helping those teams succeed not just now, but for years to come.”

Alumni and friends interested in learning more about establishing an athletic endowment or contributing to an existing endowment should contact David Johnson at 814-898-6780 or at [email protected].

Since Bob Yerkey’s days as an undergraduate at Penn State Behrend, his fondness for the college and its athletic programs, particularly men’s basketball, has been a constant.

As a freshman in 1965, Yerkey ’70 began serving as student manager of the baseball team under coach Roger Sweeting.

“Our home field was a rough affair next to a GE parking lot,” he recalled. “Now look at the beautiful on-campus facility we have. Back then, we were a few hundred kids and four buildings. It’s amazing to see just how awesome we have become in our seventy years.”

“My personal favorite has always been men's basketball,” he said, “and coach Dave Niland has us at or near the top on a regular basis.”

Yerkey’s allegiance to the sport at Behrend is reflected in his personal philanthropy. He recently opted to leverage the annual minimum required distribution from his Individual Retirement Account (IRA) to establish the Robert L. Yerkey Men’s Basketball Endowment at Behrend with a $50,000 gift.

“As NCAA Division III athletes, Behrend’s student-athletes don't play for scholarships or TV and press coverage,” Yerkey said. “They play for the love of the game and that makes them very special to me. I hope to inspire others to support Behrend Athletics. It is one of the most rewarding things I have every done.”

After graduating from Behrend with a degree in Mechanical Engineering, Yerkey launched his career with Pratt & Whitney and then joined Rehrig Pacific, with stints in both Erie and New Hampshire. Today, he rents out cottages that he built himself along Chautauqua Lake in western New York. He’s proud of his handiwork in building the cottages and equally pleased with the O gauge model train layout that he built above his garage—all 1,500 square feet of it.