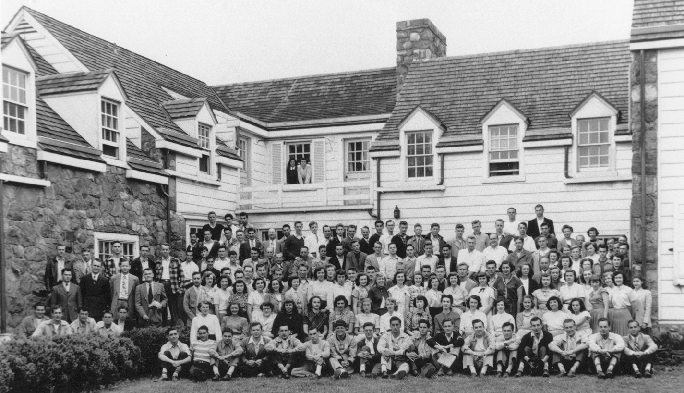 A new book by Richard Hart, director emeritus of the John M. Lilley Library, explores the history of Glenhill Farmhouse, the country home of Ernst and Mary Behrend, whose donation of the property created what is now Penn State Behrend.

Hart, who retired in 2017, began researching the book, “Glenhill Farm: The History of a Family Estate,” after a co-worker discovered thousands of letters, documents, and architectural drawings in files at the Pennsylvania Historical and Museum Commission in Harrisburg.

“There was a gap in the college history,” Hart said. “It kept coming back to me that as much as we honored the Behrends and the farmhouse, we really didn’t have an understanding of the context in which it was built.”

He found answers in the correspondence between the Behrends and their architect, R. Brognard Okie. The letters are revealing, both in context and through the style in which they were written. Ernst Behrend’s letters were short and to the point, and focused on technical issues. Most were written by an assistant. Mary Behrend’s letters were longer, and written by hand; she often included sketches for features she hoped the home would include. Once, she even built a model, which she mailed to Okie’s office in Philadelphia.

Okie, then 56, was an acclaimed architect who had built homes for the DuPonts, a Supreme Court justice, and the governor of Delaware. He had even done restoration work on the Betsy Ross house.

The home Okie built for the Behrends cost approximately $300,000 – roughly $5 million in today’s money. The family spent their first night there during the Thanksgiving week of 1932.

Ernst Behrend died eight years later. Mary Behrend spent less time at the home after that, preferring her residence in Greenwich, Connecticut. In 1948, she visited Glenhill during a cross-country trip; from the window, she saw two men walking near the pool. They were from Penn State, and their meeting that day would begin a very different history for the Behrends’ home, which, even then, was “admired by all who come to see it.”