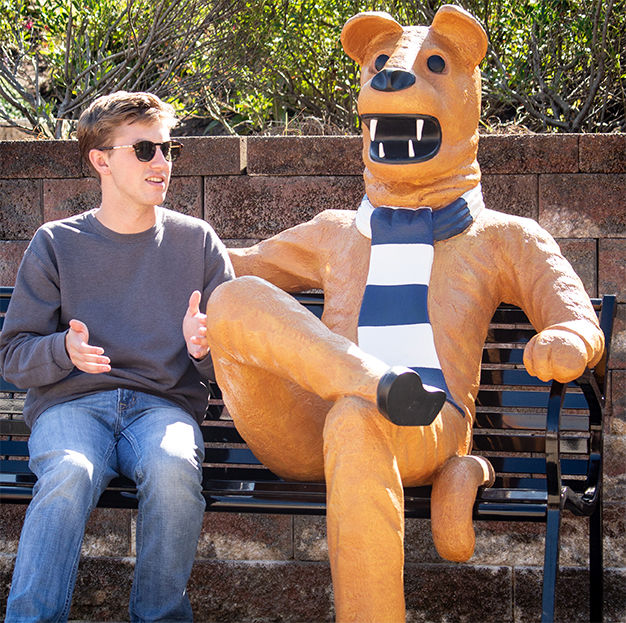 Every Penn State campus has a shrine to the Nittany Lion. Like others across the commonwealth, Behrend’s Lion is a three-quarters-scale replica of the original statue, which was cut from limestone and dedicated in 1942.

Five campuses – University Park, Lehigh Valley, York, Berks, and now Behrend – also have a Lion bench, where a life-size statue of the mascot, wrapped in a scarf, and sometimes a Santa hat, saves a seat for anyone who wants to visit. It’s a selfie station for a new generation of Penn Staters.

The Behrend Lion bench is near the entrance to Senat Hall, in the recently expanded Ben Lane Plaza. It was purchased by the Student Government Association, with a goal of connecting Behrend students to the larger Penn State identity.

“Behrend is big enough for us to have our own identity,” said John Jarecki, the SGA president. “We have our own traditions, and unique majors, and a culture that has developed over the last seventy years. But it’s still important to recognize our connection to the larger University whenever we can.”

Jarecki, a senior, has led SGA to several recent successes: In addition to the Lion bench, the group advocated for a commuter lounge in Smith Chapel.

“That’s one more place where people can meet and develop friendships,” he said. “That’s a big part of what college is all about.”

SGA also created the Civility in Discourse Forum, where students can explore divergent political views in an open, respectful setting.

“I think we’ve made some really important strides,” Jarecki said. “Last year, we talked a lot about engagement, and how not to get pigeonholed into any one group. Everybody has their own focus, and their own goals for their organization. In student government, our job is to bring all those different ideas together, to sit the right people around a table and have that conversation.

“It gives you a bird’s-eye view,” he said. “That, in turn, gives you the opportunity to integrate yourself in the larger community, because you are involved in a way that not everyone is.”

Jarecki is likely to use that skill later in life. His major is political science.

“You have to realize that you are a temporary steward of student trust,” he said. “The reward is when a project goes right. When you accomplish something that benefits a larger group of people, and that extends beyond your own time here, there is nothing more exciting than that.”

He posed for photos with the new Lion on the day the bench was dedicated. Years from now, long after he has graduated, he hopes to come back, with his family, to continue a tradition that he helped begin.

“Behrend is a special place,” he said. “It’s really important that we make it as good as we can while we’re here.”