Six Feet Are Better than Two 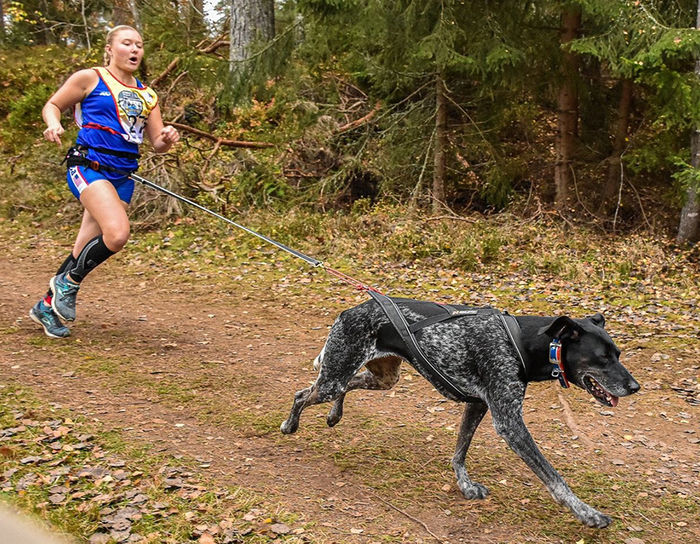 When you think of dog sledding, you probably picture a hardy Alaskan bundled in fur riding a clattering sled pulled by a team of hulking huskies over frozen terrain. What you might not imagine is a fit young woman, furiously pedaling a mountain bike through the woods behind a dog strapped to the bike stem pulling full-speed ahead. It’s called bikejoring, and it’s a form of dog mushing done on dryland.

It's one of two events, the other being canicross—crosscountry running with a dog tethered to your waist—that Emily Ferrans, a member of the Behrend Lions cross-country and track teams, competes in with her dog, Marge.

“We work together,” said Ferrans, a first-year student from Cranberry, Pennsylvania. “People sometimes assume the dog is doing all the work, but that is definitely not the case, especially not in dryland events.”

They make a great team. In fact, they are so good that the two recently competed on the world stage. Ferrans and Marge were selected by the United States Federation of Sled Dog Sports to represent Team USA at the 2019 IFSS Dryland Sled Dog World Championships in Sweden in October. There, they competed with teams from more than two dozen countries. It was Ferrans’ goal just to get to the world championships, and she and Marge worked hard to secure a spot on the thirteen-member U.S. team.

“In the U.S., Marge and I dominate in our events, but it was different in an international setting,” she said. “The Nordic teams are very athletic and their dogs are a different breed; they run Greysters, which are a German shorthaired pointer and greyhound mix bred for sprint racing. It was humbling and awesome to even be on the trails with them.”

A pup with too much energy

How does a young woman from the suburbs of Pittsburgh end up dog mushing on the world stage?

Enter Duchess, a high-energy mutt and Ferrans family pet that needed to burn off some energy.

“My dad is a commercial pilot and he was in Sweden one time and saw dogs pulling skiers, and he wondered if it was something we could do with Duchess,” Ferrans said. “He began researching different type of dog mushing and Duchess took right to it. We ran her for years.” Ferrans began dog mushing when she was just 13, and got her first official sled dog, Marge, when she was 15.

“Marge was five and already trained when I got her,” she said. “She is a Eurohound, which is a pointer-Alaskan husky cross bred specifically for sprint races of less than five miles. These types of dogs have the drive and pulling instinct of the husky, but the intelligence, sleekness, and shorter coat of the pointer, which is better for the warmer temperatures of dryland racing.”

One thing dryland dogs share with their arctic counterparts? Hyperfocus on the job at hand.

“Not even deer will distract a dog who is racing,” she said. “We ran over a beaver last year. A beaver! Marge didn’t miss a beat. She won’t stop until she gets to the finish line.”

Marge reached the pinnacle of her racing career in Sweden. At almost nine years old, it’s time for her to slow down a little.

Ferrans, who is majoring in Marketing at Behrend, plans to continue in the sport.

“I’m sure I’ll continue competing, but I won’t get another dog until after I graduate from college,” she said.

Until then, she’ll stay in shape running the hills of Behrend as a member of the track and cross-country teams.

“Dryland mushing has a lot of hills, much like a cross-country course,” she said.

Is running harder or easier without being tethered to a dog?

“Running with a canicross dog can definitely be more painful and physically demanding,” she said. “But the result is a much faster time than I could ever achieve on my own. A well-trained dog can take one to two minutes off your mile time. The challenge is learning to go with the dog and maintaining good form at a much higher speed.”

Ferrans said she runs nearly every day, but limits canicross runs with Marge to once a month.

“Canicross puts a lot of stress on the body and it can lead to injury if you aren’t careful,” she said. “However, I can say canicross has made me a much better runner. It exposes my legs and lungs to speeds that would otherwise not be attainable, and that muscle memory and foot speed is a tremendous help during cross-country and track.”