Penn State Behrend students succeed in and out of the classroom. Here are just some of the many students recording remarkable accomplishments and achievements this academic year. 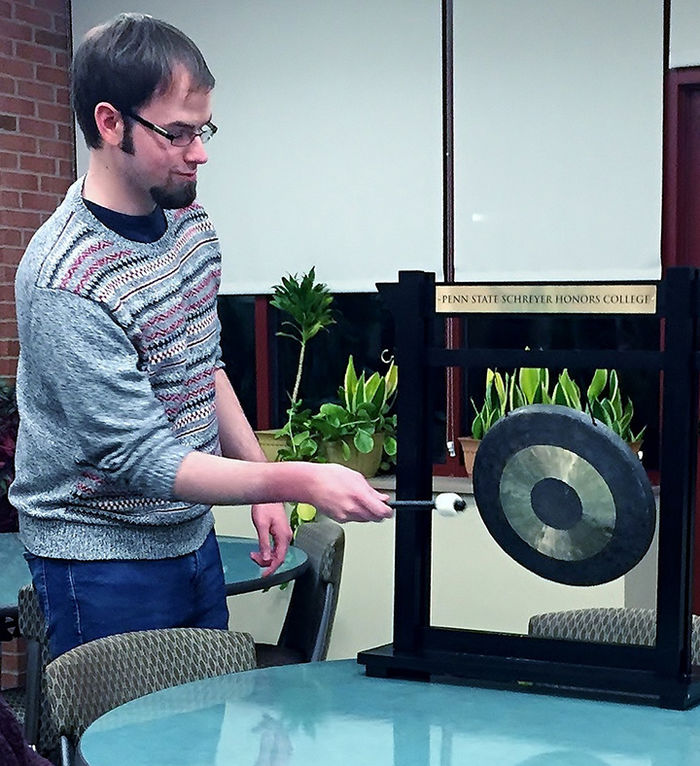 Students in Penn State's Schreyer Honors College strike a gong at the completion of their thesis. Ben Gauge, who graduated in December with dual degrees in Creative Writing and History, was the first to ring Behrend's gong this year. He celebrated his accomplishment on January 3.

Public Relations Student of the Year

Marketing major Jaret Kelly won the PR Student of the Year Contest, sponsored by the Northwestern Pennsylvania Chapter of the Public Relations Society of America (PRSA). Kelly and other area college students were challenged to apply public relations fundamentals to a realistic scenario and demonstrate the knowledge and skills needed to plan, organize, implement, and evaluate a single public relations campaign. He not only received recognition for his winning campaign, but also a $500 cash prize. Kelly also won an award for “A Behrend Story,” a holiday video featuring student volunteers that he wrote, directed, filmed, and produced for the college.

John Black, a Master of Manufacturing Management student, gave a presentation about his independent research project “Dynamic System Modeling and Simulation in Mid-Size Manufacturing Facilities” at the Midwest Decision Science Institute’s mini conference this past fall.

“The purpose of the project is to explore all of the potential applications and benefits of simulation and system modeling in smaller companies in order to help them maintain a competitive edge and keep pace with a corporate industry environment,” said Black, who is working on the project with Honeywell Smart Energy in Geneva, Ohio.

Presenting at the conference gave Black an opportunity to get feedback and answer questions that helped him hone the focus of his project.

“The end objective of this project is to provide a strong argument for how simulation and advanced modeling techniques can keep companies of limited size and resources profitable and competitive in today’s market,” he said.

Black works full-time as a design engineer at Advantage Puck Technologies in Corry, Pennsylvania, while he pursues his master’s degree. 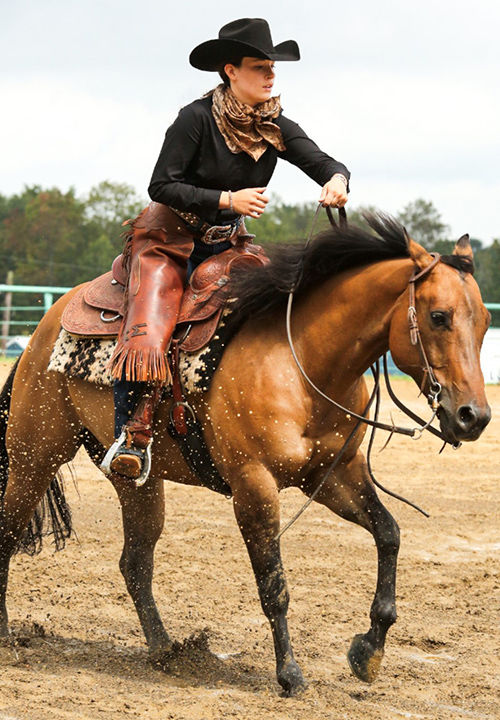 While many college students spend their weekends working or catching up on sleep, one Penn State Behrend Marketing major spends her free time in a saddle, and she wouldn’t have it any other way.

Faith Wheeler, a first-year student, has been riding horses since she was in preschool. She began participating in 4-H horse shows when she was ten years old.

“I started out showing a little pony that I got for Christmas,” Wheeler said. “I still have him!”

It was Ziggy, however, Wheeler’s faithful quarter horse, on which she rode to third place in Pennsylvania in the Ranch Horse Pleasure division of 4-H equestrian competition last month. The two also placed fifth in the state in Reining. You can read more about Wheeler and Ziggy at behrendblog.com.