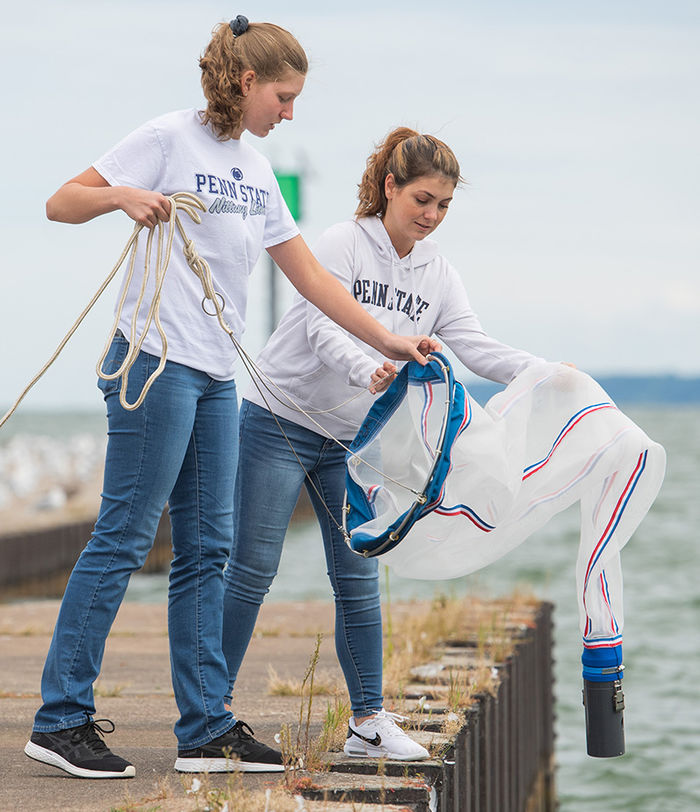 With their first throw of the net near midnight at Lampe Marina on Presque Isle Bay in Erie, three Behrend science students caught something that had
never been seen in Pennsylvania waters: a tiny, black-eyed shrimp known as Hemimysis anomala.

The species, also known as the bloody red shrimp, is native to the Black Sea. It appeared in Lake Ontario in 2006, likely carried in the ballast water from a freighter. Within the year, it had spread to New York’s Oneida and Seneca lakes.

In the years since, Hemimysis had been found in Lake Erie waters near Dunkirk, New York, and Ashtabula, Ohio.

To catch the shrimp, the Behrend students first traveled to Geneva, New York, where they met with a Hemimysis expert at Hobart and William Smith Colleges. The team—Kyle Deloe, a senior from Knox; Noel Moore, a sophomore from Lock Haven; and Emily Dobry, a graduate student from Erie—was studying the potential use of environmental DNA, or eDNA, for detecting invasive species. The approach has been used to detect other species, including Asian carp.

“It’s traces of DNA, basically, like what you might find at a crime scene,” said Dr. Ivor Knight, associate dean for research and graduate studies. “Hemimysis are small—maybe 2 or 3 mm long—and their bodies are mostly clear, so it isn’t easy to see them in the water. Testing for eDNA could provide evidence that the shrimp are or recently had been in a sample of water.”

Knight and Dr. Matthew Gruwell, associate professor of biology, secured a $177,000 grant from the Great Lakes Protection Fund to study the effectiveness of eDNA in detecting invasive species. They hope to develop a method of testing ballast water in ships that enter lakes that are not yet contaminated.

With help from the student researchers, they set up twenty-four ten-gallon fish tanks and added Hemimysis DNA. In half of the tanks, they added actual shrimp; in the others, they added a slurry—water that had included shrimp, which had since been removed. That allowed them to test how long Hemimysis DNA remains in the water after the shrimp are gone.

To populate the tanks, the team needed Hemimysis, which were shipped, frozen, from a lab in Michigan. “We needed a lot of them,” Deloe said, “and we were having trouble getting enough. We figured if we could collect them ourselves, it would be easier to run the tests.”

So they traveled to Geneva where they met with aquatic biologist Dr. Meghan Brown at Hobart and William Smith. She helped them identify the environment the shrimp prefer: rocky shoreline crevices with minimal vegetation and a depth between 6 and 10 meters. She offered one other tip: The shrimp are most active at night.

A few nights later, the students drove to Lampe Marina. Wearing red headlamps, they dropped a net into the water. When they pulled it up, they saw a swarm
of Hemimysis.

“In the light from the red headlamp, their eyes glow, like little taillights in the water,” Dobry said. “We knew immediately that we’d found them.”

Gruwell identified the microscopic features that define the species. Knight took a sample of the shrimp to Dr. James Grazio, a Great Lakes biologist with the Pennsylvania Department of Environmental Protection, who confirmed the identification.

DEP biologists had searched for Hemimysis. They had even looked in Lampe Marina. The Behrend students tried a different approach, however, waiting until later at night. It isn’t yet clear how Hemimysis will affect the ecosystem in Lake Erie. In Europe, the shrimp have reduced the algal and zooplankton biomass in lakes and reservoirs, altering the feeding patterns of larger species, including fish. The first step in understanding the potential impact of any species is determining that it is, in fact, present. That makes the Behrend team’s discovery significant, Dobry said.