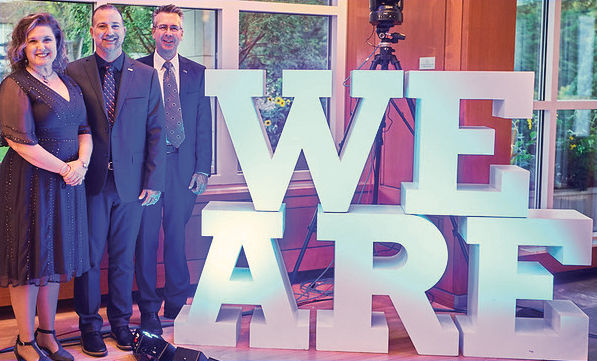 He maintains a close connection to the college. In 2016, he facilitated creation of a $500,000 Larson Texts Excellence Scholarship at Behrend and helped to establish a program that provides tuition assistance to undergraduate students working at Larson Texts and Big Ideas Learning. The companies also support Behrend’s annual statewide Best Practices in Teaching and Learning Mathematics Conference.

“The connection between Penn State Behrend and Larson Texts is strong, and Matt Totzke is the linchpin in that connection,” said Behrend Chancellor Ralph Ford. “He has been with Larson since he was a student, fully committed to its success all that time, and committed as well to his alma mater.”

Dr. Ala Stanford ‘92, a Philadelphia-based surgeon who began her Penn State studies at Behrend, has been appointed by President Biden to be a regional director of Health and Human Services. She was also honored recently by two national news organizations.

Stanford is founder of the Black Doctors COVID-19 Consortium, which has provided more than 100,000 COVID tests and vaccinations since 2020. She will serve as director of Region 3 of the HSS, covering five states, including Pennsylvania, plus the District of Columbia. She is one of three directors to be appointed for “deep expertise in their issue areas as well as critical relationships with federal, state, tribal, and local leaders,” the White House said.

Late last year, Stanford was also selected by CNN as one of its Top Ten Heroes for 2021, and earlier this year, USA Today named Stanford one of its Women of the Year for her advocacy and leadership.

Joseph Michaels, a 2018 Mechanical Engineering graduate, was recently elected to City Council in Warren, Pennsylvania. He’s one of the youngest individuals to serve on the council in the history of the city.

Katherine Dahlkemper, a 2016 Marketing graduate and assistant manager at Dahlkemper Jewelry Connection in Erie, was recently chosen as one of the Top 20 Jewelers Under 40 by Jewelers of America, a national industry trade association.

Danielle Cook, a 2010 Behrend graduate, was named Superintendent of The Randolph Academy Union Free School District in Randolph, New York, which works to educate and empower children in grades K-12 who have emotional and mental health disabilities. Cook earned her degree in Psychology from Behrend and a master of education from Edinboro University of Pennsylvania. She resides in Warren, Pennsylvania, with her husband and three children.

Cartoonist Dave Blazek, an Erie native who attended Behrend before graduating from University Park in 1979, has a new book out. Magnificent Stupidity contains 220 of his best cartoons from the past three years of Loose Parts, his award-winning comic strip syndicated by the Washington Post to newspapers across America. Blazek and his daily comics are two-time winners of the National Cartoonists Society’s Reuben Award for America’s Best Newspaper Panel Cartoon. Visit LoosePartsComic.com to learn more about Blazek and to order books or signed Loose Parts cartoons.

Adell Coleman, a 2009 Communication graduate, recently won two New York Festival Radio Awards for “Say Their Name,” a podcast that she executive produces and co-hosts. The podcast won a silver award for Narrative/Documentary Podcast and a bronze for Social Justice Podcast. Coleman is a chief content officer for DCP Entertainment.

Behrend alumna Crystal Velasquez, who graduated in 1997 with dual degrees in English and Creative Writing, is writing her next series of children’s books. Inspired by Danny & Ron’s Rescue, the South Carolina nonprofit organization depicted in the documentary Life in the Doghouse, the first two titles, Elmer and the Talent Show and Moose and the Smelly Sneakers, were released by Simon & Schuster in February. Velasquez is an editor at Working Partners, a book packager specializing in children’s books. She is also a freelance proofreader and copy editor.

After seeing nine-figure businesses built through acquisition, Adrian Pinto, a 2014 Finance graduate, left a career in private equity and investment banking in New York City and bought an Atlanta landscaping business—Georgia Scapes—to build his own business. Pinto was interviewed for a recent episode of Acquiring Minds, a podcast about buying businesses and entrepreneurship. Pinto discusses why, and how, he got into the landscape industry and how he is growing (pun intended) company profits. Find the episode on Spotify or follow tinyurl.com/2p99u9p9 to listen.

Tommy Phillips, a 2007 Communication and Media Studies graduate, wrote Penn State Bowl Games: A Complete History, published by McFarland Publishing. With play-by-play coverage of every Nittany Lion bowl game, the book chronicles Penn State football history dating back to the 1923 Rose Bowl. The book is available in print or as an e-book on Amazon and through various other outlets.

Tesha Nesbit, a 1993 Communication graduate, was named the first recipient of the newly created Behrend Distinguished Alumni Achievement Award. Nesbit, an entrepreneur and leader on issues of diversity and inclusion, is the director of diversity, equity, and inclusion and social responsibility for North American Partners in Anesthesia LLC. Nesbit was honored for her contributions to her profession, the community, and the college. She was presented with the award during a ceremony last October as part of Behrend’s Parents, Families, and Alumni Weekend.

Do you have news to share in the next Behrend Magazine? Email [email protected].